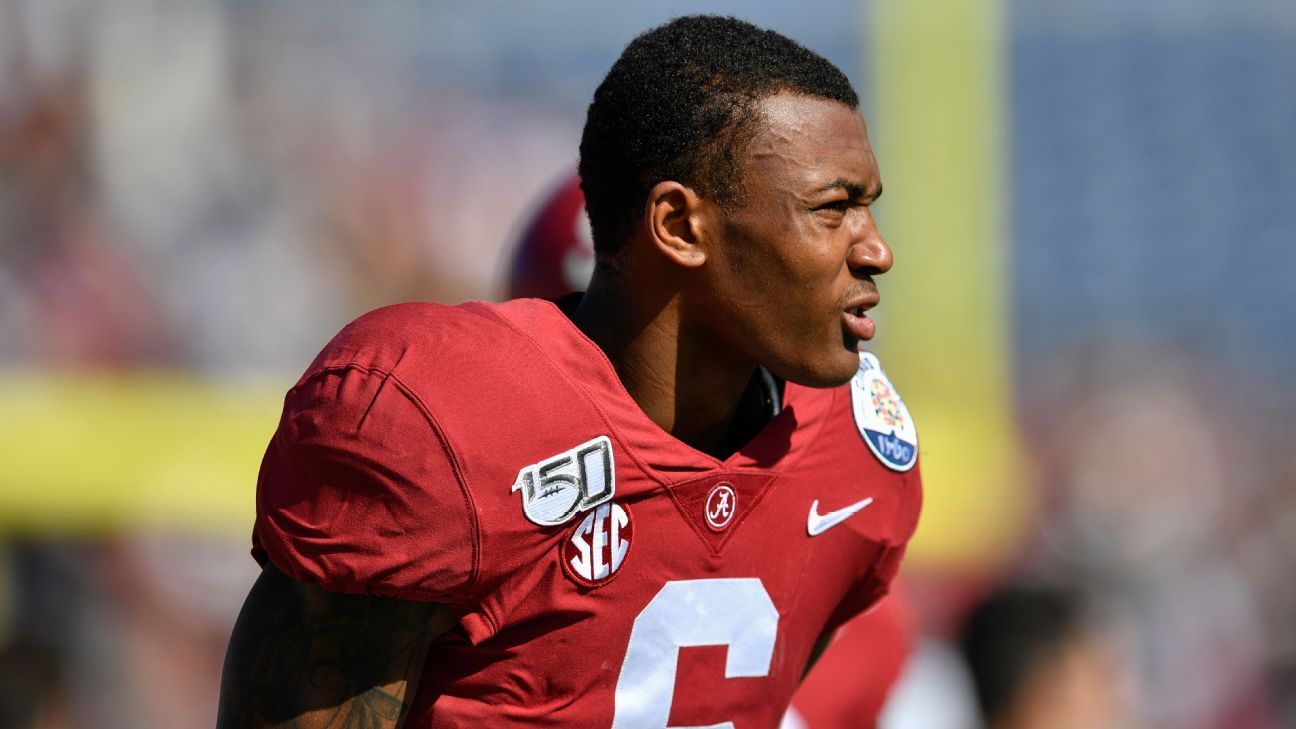 The skinny kid from Amite, Louisiana, stood on the floor of the Mercedes-Benz Superdome in New Orleans and watched as Livonia celebrated a Class 3A state championship. Tears welled in his eyes, but he wouldn’t look away. There, across the field, he saw players running around, hugging and high-fiving one another. And there he was, frozen on the losing side, in sweatpants, nursing a broken collarbone and refusing to walk away.

Zephaniah Powell sat in the stands six years ago and noticed this kid in pain. One who hadn’t played all game because of his injury, but who was as invested as anyone who took a snap that day. A coach at rival Sumner High, Powell knew exactly who he was: DeVonta Smith, or as he was better known around Tangipahoa Parish, Tay-Tay.

Smith, Powell recalled, had a “hunger in his eyes.”

And a few months later, when Powell was hired to lead the Amite High program, he learned exactly what that hunger meant. It meant Smith grabbing every quarterback on the roster to throw him passes after practice. It meant him getting extra reps of squats and power cleans in the gym at night. It meant him running stadiums on the weekends.

It was grueling work, Powell remembers.

“It’s a nice little incline,” he said of Russell Memorial Stadium. “It goes up pretty good.”

Powell understood right away that while Smith was his best player, he was still hungry for more. Smith was determined to transform his body and outperform expectations. He refused to walk away from a defeat — from a challenge — back then, just as he does now.

Nine months ago, Smith could have walked away from Alabama. He’d already caught 118 passes and 23 touchdowns in three seasons in Tuscaloosa, including a school-record 14 scores in 2019. He was the reason the Crimson Tide had won a national championship, immortalized in paintings hung around living rooms across the state. In other words: He had nothing left to prove.

Tua Tagovailoa throws a perfect pass to DeVonta Smith for a 41-yard TD in OT, giving the Crimson Tide their fifth national championship under Nick Saban.

What’s more, the wide receivers he came to school with, Jerry Jeudy and Henry Ruggs III, were leaving for the NFL, along with quarterback and fellow junior Tua Tagovailoa. But something told Smith to stay.

We never saw him shed a tear during those heartbreaking losses to LSU and Auburn last season that ultimately knocked Alabama out of the College Football Playoff, but Smith told us exactly what they meant to him when he announced that he was returning for his senior season:

“I have unfinished business to take care of, and the only way to do that is to stay one more year.”

Powell was walking the halls at school one day when he saw his star wide receiver abruptly stop, hit the floor and crank out 10 pushups as his classmates maneuvered around him.

“I understand,” he said. “As long as you’re not tardy for class.”

Smith was a little over 6 feet tall but tipped the scales at 140 pounds at the time. He was teased regularly about his weight, Powell said, and rather than let it frustrate him, Smith took it as a challenge.

So whenever he saw his reflection, whether it be in a mirror, a window or a polished car door, Smith would drop whatever he was doing and crank out 10 pushups.

A common comparison Smith has received is that his style is reminiscent of a young Marvin Harrison. Like the former Indianapolis Colts star receiver, Smith isn’t physically imposing, but he’s ruthlessly effective.

“And that’s a good comparison,” Powell said. “But for us, DeVonta was Jerry Rice 2.0. Because Jerry Rice was the same way coming out of Mississippi Valley State University: He wasn’t the biggest, he wasn’t the fastest, he wasn’t the tallest. But once you got him on that football field, he was technically sound.”

Smith’s routes were so precise. His hands were so strong. He got up to speed so quickly, and the way he ran, Powell said, was so effortless.

“It’s like he’s running on pillows,” he said. “You can barely hear his feet.”

Billy Napier, formerly the wide receivers coach at Alabama, remembers the sound of those footsteps well. Napier recruited Smith for what felt like four years, he said, trying and ultimately succeeding in fending off in-state LSU.

Napier recalled the first time Smith came to a camp at Alabama, still an underclassman in high school. Smith’s size was a major question mark with coaches worrying about his durability. But there were intangibles there, Napier said.

There was a physicality that came from playing defense. There was a toughness that seemed ingrained in him.

“What you saw was a guy that was very skilled and a guy that could get open and make plays and was very productive regardless of the talent level,” Napier, now the head coach at Louisiana, said. “Even at a young age, you put him up against the best cover guys and he could get open.”

Said Powell: “Because of his slight build people are going to overlook him. But DeVonta likes it that way because the next thing you know he’s got six catches and 200 yards.”

Mike Locksley, who would take over for Napier as receivers coach at Alabama, said it was as though Smith never dropped a pass that was within his reach. As a freshman, Smith went up against future pros Marlon Humphrey and Minkah Fitzpatrick, who were older than him, and he’d hold his own, bringing in more than his fair share of 50-50 balls.

“When the ball was in the air,” Locksley said, “he would find a way to get the ball and make the play.”

Napier was only weeks on the job as head coach at Louisiana, trying to build a staff from scratch, when he stopped what he was doing to watch a game in Atlanta that had gone into overtime.

Alabama and Georgia had gone back and forth all night, and now his former team was on the ropes, trailing by a field goal with a national championship on the line. Tagovailoa took a poorly timed sack, and hope was fading.

Then, on second-and-26, Napier watched as the freshman, Tagovailoa, drew back and found another freshman, Smith, racing down the sideline for the winning touchdown.

Alabama wins the CFP National Championship over Georgia as Tua Tagovailoa finds DeVonta Smith for a 41-yard touchdown in overtime.

Powell was at home in Louisiana, lying in bed and watching the game on TV when Smith etched his name into history. Powell screamed, sending his sleeping wife into a panic. They had a newborn baby. “What’s wrong?” she asked. “Is everything OK?”

Powell kept screaming and pointing at the TV. Then he called the other coaches on staff and suddenly they were all crying.

Is this really happening?

Mac Jones drops back and finds DeVonta Smith on the 42-yard completion for an Alabama touchdown.

It was, and Powell said it was a testament to how Smith had kept his head on straight. Even though Smith didn’t play much as a freshman, he never let himself get frustrated. He kept working, asking to be put on special teams as a gunner on punt coverage.

“A kid that was frustrated couldn’t have gone out against the University of Georgia and caught the winning touchdown,” Powell said. “A frustrated kid wouldn’t have been locked in.”

Fast forward about a year from that seminal moment, and Smith was still locked in. He told reporters at the time that he didn’t want to talk about the Georgia game or his touchdown catch. He said he didn’t care and, “It’s a new year. We’re moving on.”

And that’s who Smith is in a nutshell. He might not be flashy like his former teammates Jeudy and Ruggs. Entering this season, he continued to get lost in the hype surrounding fellow wideout Jaylen Waddle, who was as dynamic a player as there is in college football.

But then, four games and one kickoff into the season, Waddle was knocked out for the year with a broken ankle against Tennessee, leaving Smith as the last of the so-called Ryde Outs standing.

According to CBS, offensive coordinator Steve Sarkisian calls Smith “Rubber Band Man” because of the way he can contort his body to catch passes. But losing Waddle brought new meaning to the nickname: Smith, a senior among primarily freshmen and sophomores at the position, had to be the one to hold the group together.

He doesn’t say much. He never has. But he set an example by going right back to work. A week after the Tennessee game, Smith made a statement with 11 catches for 203 yards and four touchdowns against Mississippi State.

If there’s a trademark beyond Smith’s strong hands, it’s his consistency. You can watch, Powell said, and you’ll see that it doesn’t matter who he’s going up against.

“If it’s a Western Carolina all the way up to a Clemson,” he said, “they’re going to get the business.”

On Nov. 14, Smith will face his home state team, LSU, which helped knock Alabama out of the playoff race in 2019. The head-to-head battle of Smith and All-America cornerback Derek Stingley Jr. will be appointment viewing and could go a long way in deciding the outcome of the game.

Through six games, Smith has hauled in 56 catches for 759 yards and eight touchdowns. His next touchdown catch will be the 32nd of his career and make him the school record holder, surpassing former Crimson Tide great Amari Cooper.

Folks around Tuscaloosa have taken to calling him Smitty, and he’s no longer the string bean cranking out pushups in the hall, having bulked up to a respectable 175 pounds. But Powell said he’s still Tay-Tay to everyone back in Tangipahoa Parish.

He never was able to win a state championship for Amite. But he got a title at Alabama, and he’s hungry for another.