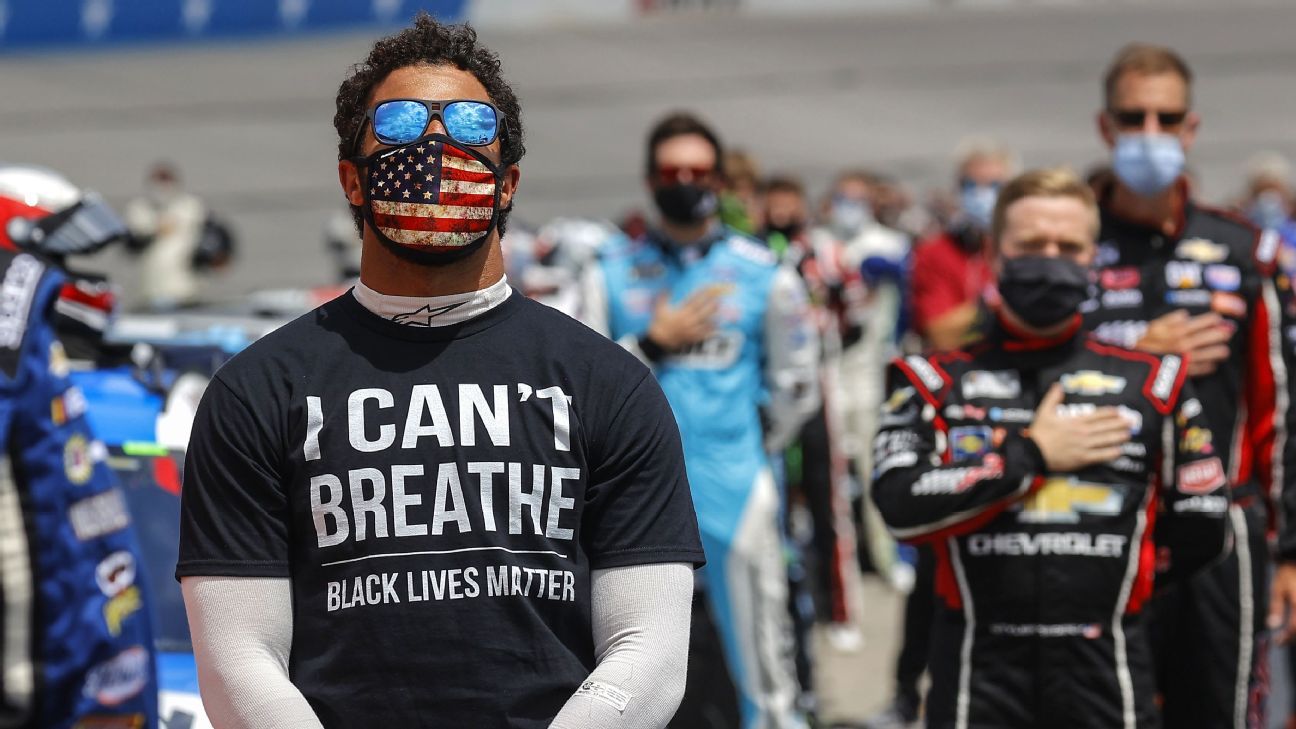 Bubba Wallace‘s “knees were trembling” when he cast his ballot in his first presidential election. NASCAR’s only Black full-time driver didn’t watch the news before this summer, one of national unrest over politics and racial justice issues.

He tuned in and quickly became an unwitting national activist. Wallace successfully called on NASCAR to ban the display of the Confederate flag at races, ran a “Black Lives Matter” paint scheme and became the central figure in a sport facing its own racial reckoning.

Wallace overnight had a national audience for his “Peace. Love. Understanding” mantra and a position to exact change. On Friday, the 27-year-old was named the Comcast Community Champion of the Year, a prestigious industry award that honors NASCAR members for philanthropic efforts.

“I just did what I felt was right and what needed to be said and done and stood behind that proudly,” Wallace told The Associated Press. “To outsiders looking in, they think it takes a lot of courage, but it’s just another day to me.

“I said ‘Let’s take down the flag.’ It shouldn’t be a big deal, but now people say it is a big deal and its reshaping the sport. I didn’t have my mind set out to do that.”

Comcast donated $60,000 to Wallace’s “Live To Be Different Foundation” that aids individuals in overcoming race, gender, disabilities or socio-economic situations to fulfill their potential.

“Bubba embodies everything this award stands for and we look forward to standing together as he continues to make a positive impact in all of our communities and the industry,” said Matt Lederer, Comcast vice president of brand partnerships and activation.

Comcast, a premier partner of NASCAR’s Cup Series and the title sponsor of the second-tier Xfinity Series, has donated more than $700,000 to 18 different charitable organizations since launching the award in 2015.

Wallace until this year considered himself a millennial just trying to jump-start his career. He had a good job as driver of NASCAR’s iconic No. 43 for Richard Petty Motorsports, a mid-level team that struggled with securing sponsorship and posting consistent results.

Although Wallace has six career Truck Series victories and is the first Black driver to win a NASCAR national series race since Wendell Scott in 1964, he’s winless in 111 starts at the elite Cup level. His RPM team isn’t among the best and the team has outperformed to Wallace’s career-best 22nd ranking headed into Sunday’s season finale at Phoenix Raceway.

His mission has since multiplied. It began this spring when he first began speaking out against racial injustice in America and then called for a ban of Confederate flags at NASCAR events.

Some fans railed against Wallace, who was assigned security at tracks because of threats NASCAR received against the driver. A plane in June pulled a Confederate flag over Talladega Superspeedway in Alabama, where a parade of Confederate flag-waving protesters drove back and forth outside the track entrance.

When an RPM crew member discovered the garage pull-down rope in Wallace’s stall had been fashioned into a noose, NASCAR called the FBI and said Wallace was the victim of a hate crime. An investigation found Wallace was not a victim, leading to accusations he was part of a hoax.

The calls of fraud included one from President Donald Trump, who suggested Wallace owed an apology to the rival race teams that stood in solidarity with him at Talladega. Wallace now found himself in the middle of a fierce political debate with a responsibility to back his words with action.

Wallace has become his own “BW” brand and pulled in millions of dollars in sponsorship that gave him free-agent flexibility to take NASCAR to another level. He will be the driver next season of a new No. 23 Toyota for team owners Michael Jordan and Denny Hamlin and the car will be primarily funded by sponsorship Wallace sold. Jordan becomes the first Black majority NASCAR team owner with a Black driver.

Social media last week was full of photos of young Black children dressed as Wallace for Halloween, images that again reminded Wallace of the impact he’s made. He’s honored but doesn’t feel he’s done anything besides speak for peace, for love, and for understanding.

“People say I’m doing this all for attention … that’s not true,” Wallace said. “This is who I am. I’ve gotten (fined by NASCAR) for saying what’s on my mind, my wallet has been hurt because of that.