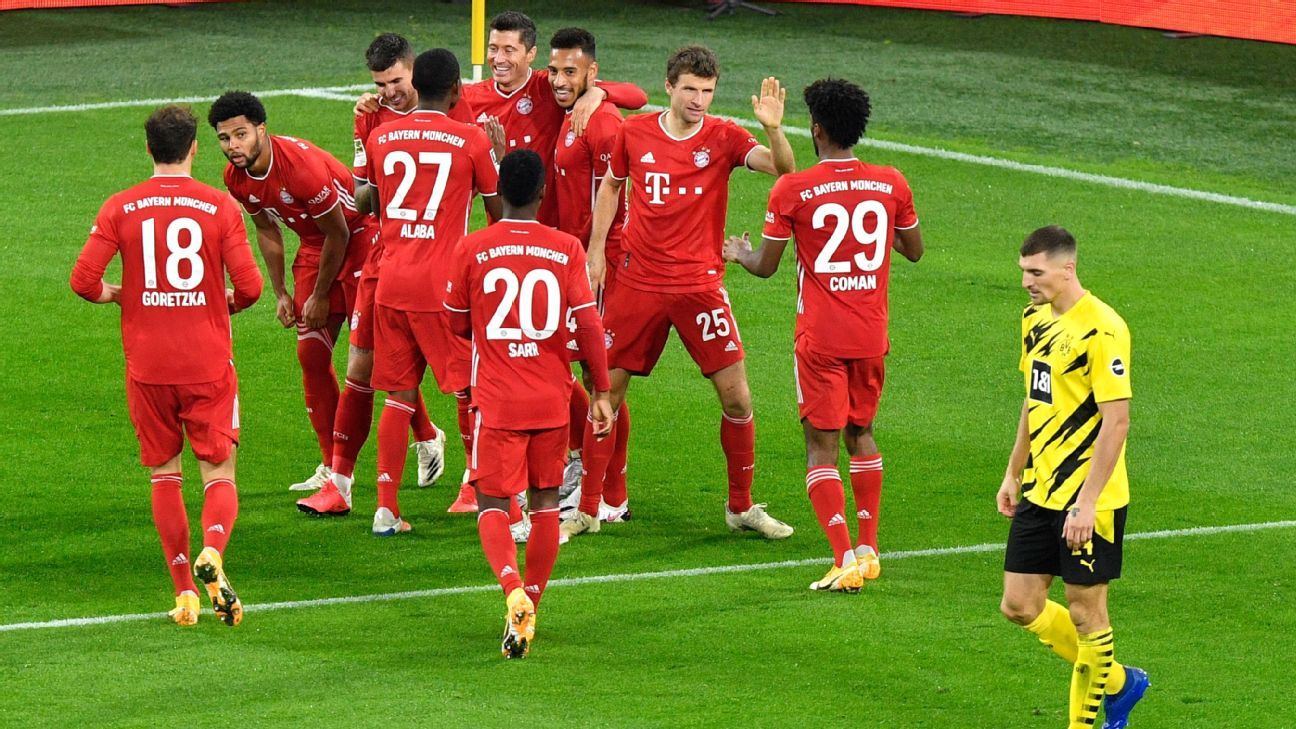 Bayern pulled even with RB Leipzig at the top of the Bundesliga after a 3-2 win over Borussia Dortmund on Saturday that showcased much of what makes them special. They absorb setbacks, they adjust and they move on. And they can beat you in so many different ways.

The pregame hype, naturally, was about the clash between Robert Lewandowski, whose silverware collection grew considerably in 2020, and his heir apparent, Erling Braut Haaland, the meditating, yoga-loving, shirtless tractor-driving hero for the 2020s. So much so that the Bundesliga saw fit to hype the contest with a tailor-made cartoon rap throwdown.

But strikers, even generational talents like these, are generally dependent on what happens with the the other 10 guys on the pitch behind them. And the fundamental difference is that Lewandowski resides at the cutting edge of an efficient self-sustaining eco-system, brimming in confidence and energy, sure, but continually adapting and self-correcting.

They can lose players to injury (as they did with Joshua Kimmich late in the first half), they can concede goals and they can get stopped in their tracks, like a boxer who runs into a left hook. But every misstep feels like a teachable moment in real time, and their corrections — when they come — are minimal. The basic framework — high line, furious press, flying wingers — gets tweaked, but rarely significantly altered.

As for Haaland, what sits behind him isn’t defined as much by patterns of play (save for the most basic), but individual initiative. He also has hugely gifted teammates and benefits from chances and opportunities, but too often, they’re extemporaneous moments. Dortmund coach Lucien Favre hasn’t yet made Dortmund greater than the sum of its parts. And with a contract expiring in June — and no plans for the club to negotiate an extension as of right now — perhaps he never will.

With Benjamin Pavard injured, Bouna Sarr, a deadline day acquisition from Marseille, lined up at right-back for Bayern. Sarr is 28 and before this season, he’d had played zero minutes of Champions’ League football and zero minutes of international football. He was signed for depth — to be an extra body in the endless slog that is the COVID-altered 2020-21 season, and on Saturday he found himself replacing a World Cup winner on a Treble-winning side against their fiercest opponents.

Unsurprisingly, Dortmund targeted him early and often with Gio Reyna, Raphael Guerreiro behind him and Marco Reus, flitting in from his starting position behind Haaland. It was a sound strategy, but the problem with this Bayern team is how they quickly adapt.

Jurgen Klinsmann says Dortmund did enough to at least draw Bayern, they just weren’t clinical in the final third.

The high press got that little bit more intense, making it tough for Dortmund to get the ball forward with accuracy. Whenever Sarr came forward, Bayern made sure he was neatly covered. And often, the back line tilted his way, with Jerome Boateng coming over to help, David Alaba sliding across and Lucas Hernandez almost becoming an additional central defender. When Bayern were in possession, they weren’t averse to keeping the ball that little bit longer.

And so, Dortmund went to their bread-and-butter. When you have a striker as fast and as strong as Haaland, why not? At one point, he was stopped by a marginal offside call after a brilliant surging run that left Thomas Mueller flat-footed. Shortly thereafter he road-graded Boateng. Haaland was called for a foul, but the messaging was clear, as evidenced by the dirty look Bayern’s veteran center-back gave him.

Of course, two can play that game. Bayern’s riposte on the counter saw Gnabry’s quick burst leave Meunier behind before Lewandowski steered home his pointpoint cross. VAR disallowed it (correctly) for offside, but it was close. So close that it served as a reminder of what Bayern can do and how quickly they do it.

Then came the bad part for Bayern. A poor pass from Sarr caused Kimmich to lose the ball and then, while trying to recover, hack down Haaland. It was an uncharacteristic error, both mental and physical, from Kimmich and it could have resulted in a red card. Instead, it resulted in Kimmich being injured. Corentin Tolisso replaced him and for a minute, you felt that without Bayern’s metronome, Favre might find the edge he needed.

Things looked up further for Dortmund when Guerreiro (again on Sarr’s side) tucked it inside for Marco Reus to break the deadlock, and it looked as if Dortmund would enjoy the luxury of a half-time lead. But deep in injury time, Thomas Delaney ran into the back of Gnabry and Bayern were awarded a free kick from the edge of the box. Lewandowski, Gnabry and Alaba stood over the ball in conference, like Logan Roy’s children figuring out what to do next. It ended with Alaba striking it past Roman Burki with the help of a big deflection off Meunier.

They say conceding a goal just before half-time is one of the most deflating things in the sport. Well, conceding an equaliser just before the break is even worse. And giving up another, just after the break, well, that’s just the pits.

It was a standard Lucas Hernandez cross, turned into an inviting gimme by Lewandowski’s brilliance and aerial ability. He got across Mats Hummels (no slouch himself) and rested against him to get just enough torque to steer it to the far post.

Two goals in four minutes either side of half-time. Brutal.

Dortmund’s reaction was furious, but untidy and again, Bayern could have added to their lead. Coman was denied first by the post, then by Roman Burki. Dortmund turned the screws, camping out in the Bayern half, but knowing the counterattack could come at any time. Flick replied with another set of fresh, roadrunner legs, as Leroy Sane replaced Coman. And sure enough, it was Sane who finished a classic counter cued up by Lewandowski to make it 3-1.

Haaland pulled one back with the sort of move which, when executed perfectly, simply can’t be countered: the dink over the top with the big Norseman running off the last defender. It was the kind of two-man transition move that really isn’t a game plan, but rather something you have to take when it comes to you.

On this day, it was going to take a clever game plan and plenty of energy and young talent to disrupt Bayern. Dortmund had the latter — they usually do — but the former was nullified early.

Maybe it would have been a different story without the gut punch of the Alaba goal just before half-time, but that too is the mark of champions: getting smacked in the face and persevering as if nothing happened. And Bayern, as they showed again, are the Bundesliga’s Alpha club for a reason.