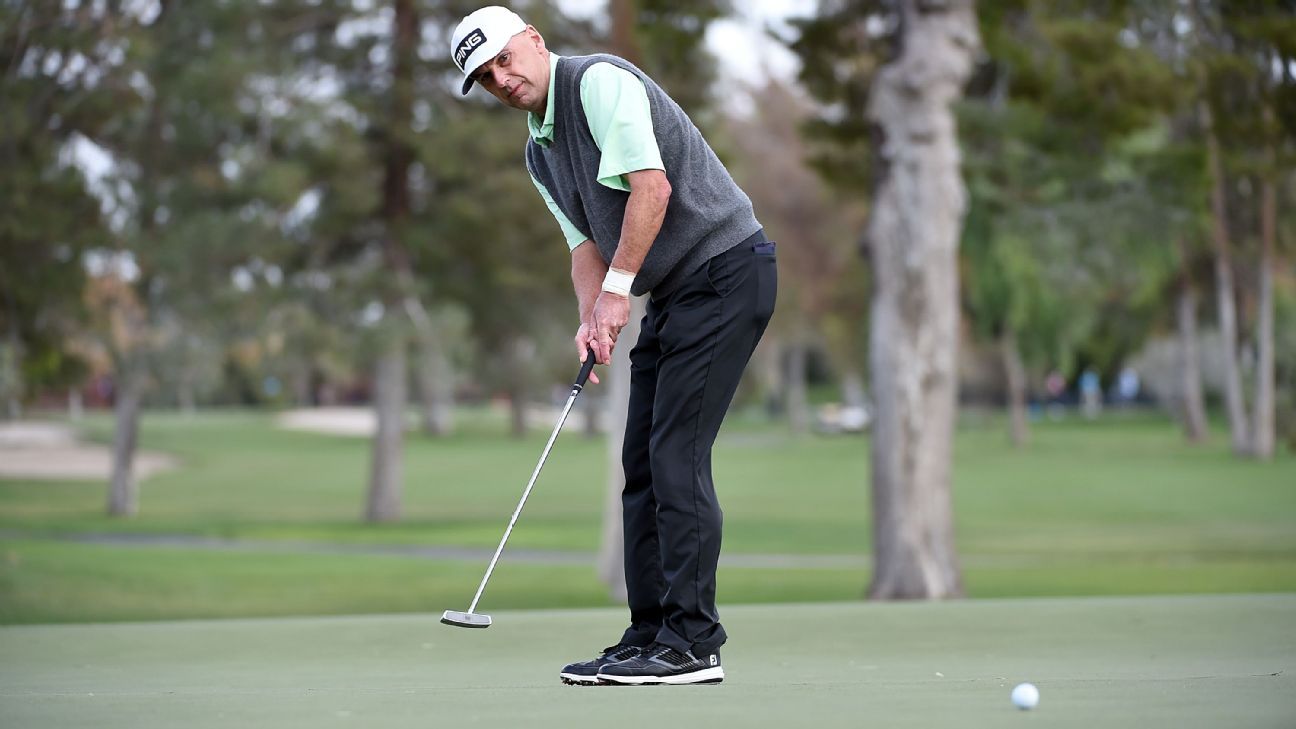 PHOENIX — The PGA Tour Champions season will last at least another day.

The final round of the season-ending Charles Schwab Cup Championship will be played on Monday after Kevin Sutherland and Paul Broadhurst traded pars through six playoff holes in near darkness.

Broadhurst played a superb final round on Sunday, erasing a 6-shot deficit with a bogey-free 63 in the season finale for the over-50 tour, which won’t crown a champion until next year because of the coronavirus pandemic.

Sutherland stumbled through the early part of the round to lose an overnight 5-shot lead over Wes Short Jr., but he closed with a birdie on the par-5 18th hole to shoot a 2-under 69.

Broadhurst and Sutherland finished at 15-under 198.

After all those birdies, neither could get anything to fall in the playoff.

Trading missed birdie putts as the sun raced toward the horizon, Sutherland and Broadhurst kept agreeing to keep playing, not wanting the tournament to push into Monday.

They finally agreed to call it when Broadhurst missed an 8-foot birdie putt on No. 18 and Sutherland dropped in a 4-footer for par.

It was just too dark.

Plenty happened before the sun went down.

Sutherland, who once shot 59 on the PGA Tour Champions, opened with a 6-under 65 in benign conditions on Friday and was even better when the wind picked up Saturday, shooting a 64 as scores around him soared.

On a chilly Sunday, Sutherland couldn’t take advantage of good scoring conditions early, allowing the field to pull closer. He opened with five straight pars, and a bogey on the 460-yard par-4 sixth dropped him to 12 under.

Broadhurst took a unique approach to putting, looking at the hole rather than the ball while making his stroke.

It certainly worked early as he holed one putt after another.

Playing in the group ahead of Sutherland, Broadhurst had five birdies in the first eight holes to tie for the lead. A long birdie at the par-3 eighth hole moved him into a tie with Sutherland, but a pulled short birdie putt on No. 9 cost him a shot at the outright lead.

Sutherland made his first birdie by dropping in a 4-foot putt on the long par-4 10th to take the lead back.

Broadhurst made a short birdie putt at the par-3 13th to tie it up again, then made another birdie on No. 16 for the lead.

Sutherland poured in a birdie putt from a similar length right behind him, tying it at 15 under.

He hit his tee shot on No. 17 into the left rough but punched a shot under tree limbs to about 12 feet. Broadhurst pumped his first as the ball came to rest and made the birdie putt to go back up a shot.

He had to lay up from a fairway bunker on No. 18 and looked away in disgust as his third shot fell short left. He made the putt, though, and had an excited reaction of his own after forcing the playoff.

Then the missed putts and darkness came.