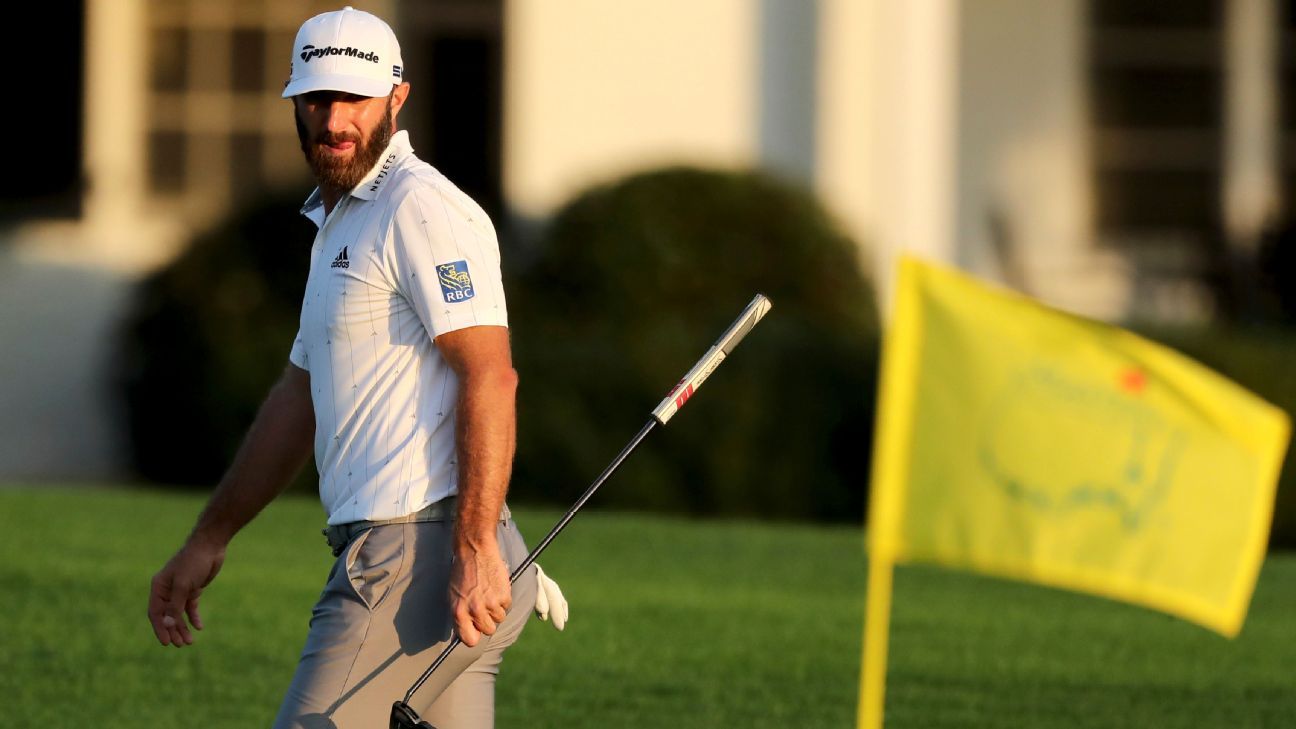 AUGUSTA, Ga. — Self-isolating for 11 days in a Las Vegas hotel room just a few weeks ago, Dustin Johnson is now on the verge of lifelong access to an exclusive, far different room: the Champions Locker Room at Augusta National.

From COVID-19 positive and doubts about his ability to compete in the postponed Masters to capturing his second major title, Johnson is simply the epitome of golf’s version of 2020 strangeness amid the pandemic.

He’s been on a heater since August, playing better than just about anyone in the game, then sidetracked for two weeks and stuck with nothing to do because of the virus, and now beating up on everyone again.

“I would say the game is in really good form right now,” said Johnson, who shot 7-under-par 65 to take a commanding four-stroke advantage over Sungjae Im, Abraham Ancer and Cameron Smith. “Very similar to what it was back in 2017 (when he was also No. 1 in the world). It’s just very consistent. I feel like I’ve got a lot of control of what I’m doing, controlling my distance well with my flight and my shape. I’m very comfortable standing over the golf ball right now, and obviously that’s a really good feeling.”

It should be even better knowing that Johnson doesn’t exactly have an All-Star cast of players chasing him. Im, Ancer and Smith have combined for three PGA Tour victories, with Im and Ancer each playing in their first Masters.

Perhaps the best thing they have going for them is they have nothing to lose on Sunday.

Johnson has everything to lose — and knows it.

He simply has to get it done this time, which might sound harsh but is the reality for someone with 23 PGA Tour victories but just a single major title.

Johnson, 36, should have more than one major at this point, a long list of close calls and final-day calamities dotting his resume. His most recent was a tie for second at the PGA Championship in August, where a final-round 68 was certainly no shame but was surpassed by surging Collin Morikawa.

This is the fifth time Johnson has taken at least a share of the 54-hole lead into the final round of a major championship. He did not convert the previous four times.

“If I can play like I did [Saturday], I think it will break that streak,” said Johnson, who hit all 14 fairways and 16 of 18 greens in regulation in the third round. “It’s just 18 holes of golf. I need to go out and play solid. I feel like I’m swinging really well. If I can just continue to give myself a lot of looks at birdie, I think I’ll have a good day.”

It certainly makes the task easier having a four-shot advantage and some of the game’s more formidable players farther down the list. Justin Thomas, who began the day tied with Johnson, could manage just a 71 and fell six shots back. Jon Rahm, also tied, shot 72 and is now seven behind. Patrick Reed, the 2018 Masters winner, bogeyed the final two holes and is also seven back, in a tie for seventh.

Rory McIlroy shot 67 after a second-round 66. But his first-round 75 doomed him to also-ran status.

“Just go as low as possible,” Thomas said. “Unfortunately, I put myself so far back, that’s really the only thing I can do. Unfortunately for all of us chasing DJ is there’s no fans or nothing to make that moment even harder, to have the buzz, to have the adrenaline, to have a little bit more pressure put on him that there won’t be there this year.”

Johnson might have enough mental scar tissue to overcome regardless, although he’s always shown an amazing resiliency to bounce back. He won the 2016 U.S. Open at Oakmont, for example, a year after three-putting the final green at Chambers Bay to blow the U.S. Open to Jordan Spieth, who won by a shot.

There have been other meltdowns, such as the 2010 U.S. Open at Pebble Beach, the final-hole rules breach at the 2010 PGA Championship, the out of bounds iron shot on the final day at Royal St. George’s in 2011.

Last year, he finished a shot behind Tiger Woods at the Masters and finished second to Brooks Koepka at the PGA Championship. He has a total of 10 top-5 finishes in majors and has been a runner-up five times.

“I put myself in the situation a lot of times,” he said. “I know what it takes. I know how to respond in this situation. I’m very comfortable with having the lead going into [Sunday’s final round]. I’m looking forward to the challenge. It’s still going to be a tough day. I’m going to have to play well if I want to get it done.”

Johnson certainly has plenty of good golf to draw upon. Just look at the results coming into the Masters: tie for second last week in Houston, a tie for sixth at the U.S. Open, a victory at the Tour Championship; a playoff loss at the BMW; a win at the Northern Trust (where he shot 30 under par), a tie for second at the PGA. Back in July, he won the Travelers Championship.

There has been no shortage of great golf from Johnson in this wild year, one that couldn’t even be derailed by a positive COVID-19 test.

But now comes a test he needs to pass: pulling out a major championship victory on Sunday.