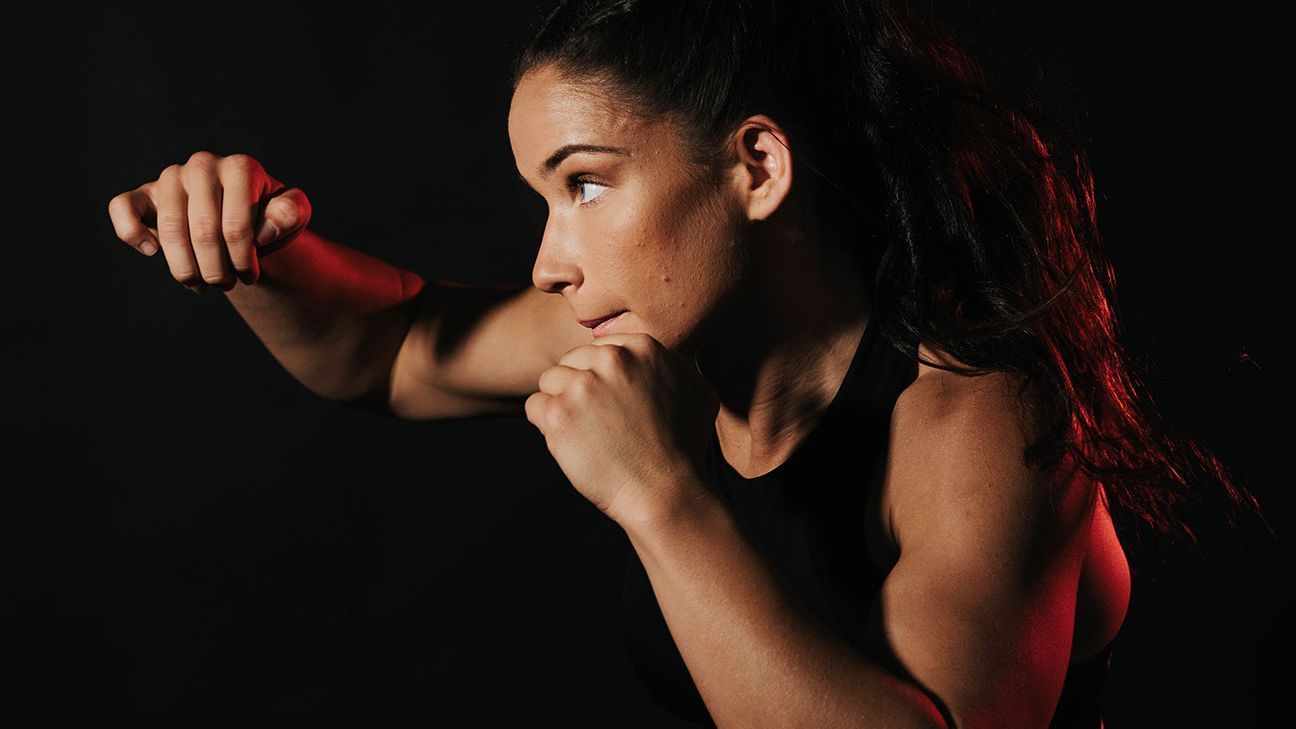 Whether she knew it or not, Chelsea Hackett seemed destined for a UFC career from an early age.

Combat sports filled her childhood and paved the way for a shot at the big time, which has come in the form of an opportunity on Dana White’s Contender Series.

The Gold Coast-raised 21-year-old will become the third Australian to feature on the Contender Series, an opportunity Hackett knows has the ability to change her life completely. But it is in no way the end game, either.

When asked whether she has the skills to one day become a UFC champion, Hackett told ESPN: “100 percent, that just gives me goosebumps talking about it. People say ‘Contender’s your dream’ but Contender isn’t my dream, being a UFC champion is my dream, and Contender is a stepping stone towards that.

“So I get on Contender, I get the win, I get the contract and then it just all goes ahead from there. I’m in the flyweight division and I’m always looking at the girls that are fighting and the movement that is happening in the flyweight division. And I know I’ve got the skills and the package to really take it to the top and challenge for the belt.”

That “package” is the result of a 13-year love affair with combat sports.

Hackett began taekwondo when she was just 8 years old, achieving a junior black belt before moving into Chinese boxing — a sport she describes as a virtual free-for-all — and then eventually settled into Muay Thai fighting.

Twenty-three professional fights later she was a WBC Australian and World Lightweight Muay Thai champion, only to have the international title later stripped because of an illegal strike.

“When I fought for the WBC Australian title I was up against one of the toughest chicks in Australia. I’m pretty sure it won Fight of the Night; it was an epic fight that went all five rounds,” Hackett recalled. “It was a hard-fought fight, I won unanimously on all five rounds and that set me up for the WBC International title and I fought a girl from Italy with 52-plus fights who was as tough as they come.

“I won by TKO in the fourth round but then six months later that fight actually got reviewed and I actually got stripped of my belt. So in the fourth round, when I stopped her, they said that one of her knees was on the ground when I threw a punch. But the stripping of my belt didn’t come until six months after the fight. I was devastated, but that was my last Muay Thai fight and I was already training for MMA in the lead-up for that fight as well.

“It was a disqualification but I just took it on the chin and I had already crossed over to MMA anyway, so I let it go and thought ‘that’s the past.’ It was a tough pill to swallow because I want to win everything, but it was a good learning curve for sure.”

Knowing she was headed for a fourth combat sport gave Hackett the distraction she needed after losing the Muay Thai world title.

But there was also a need for her to refine a training program that hadn’t included the extra disciplines necessary to be a complete MMA fighter.

“Muay Thai it’s very traditional, it’s doing the same thing every day and is all about striking, you’re running every day, you’re doing S&C [strength and conditioning]. What I found was the major difference was all the disciplines that are involved in MMA compared to Muay Thai,” Hackett told ESPN.

“So I couldn’t just transition and just do my striking training; that’s the smallest piece of the puzzle coming to MMA. I had to add my wrestling sessions; I had to add my jujitsu but also keep my conditioning up, keep my S&C [training] going. So the biggest transition was that my training load doubled.

“I was doing double the hours in the gym every single day just to get all my disciplines in through the week. So the volume of the sessions, it was a different load on my body. I had to adapt to it, especially the wrestling. At the start I found that the wrestling took a real toll on my body and then my body started getting used to it and I was thinking ‘yep, we’re on, we’re good to go’.”

After drawing her first MMA fight in May last year, Hackett reeled off three straight Eternal MMA victories in nine months to assert herself on the Australian scene and, clearly, get on the UFC’s radar.

“I knew about Contender way before I announced it,” she told ESPN. “From my last fight I was speaking to my management team and they said I really needed to win my last fight to get the spot; so going into my last fight I knew that this was it.

“I knew if I won that fight I would potentially be going to Vegas. No one else knew that, it was all very quiet and on the down low, so I won that fight and in the back of my head I knew it, I said that ‘this was my time, I’m going to get the Contender call-up.’ And then about 10 days later, [the COVID-19 pandemic] hit and it kind of just threw everything out and I just remember not knowing what was happening.

“So I just kept my training up in quarantine and still had the mentality that it was happening, but just later in the year. And then my manager called and said ‘here’s your new date, here’s your opponent’ and I was so excited.”

Hackett got a taste of what she might one day experience herself last year at UFC 243 in Melbourne, coming face-to-face with one of the promotion’s biggest stars and the woman she hopes one day will be standing across from her inside the Octagon: Valentina Shevchenko.

“I went to a seminar and we all had the opportunity to ask questions [of Shevchenko]; it was hard because there was a lot of us there and we all lined up for a photo and I think I just got a bit starstruck,” Hackett said with a laugh.

“I remember, though, when I was walking to get a photo, we kind of stared at each other a little longer than it should have been. We were just staring at each other; she wouldn’t break the stare and I wouldn’t break the stare and I was just like ‘this is weird’ but I lined up and we got the photo. But it was such a cool moment; I was looking at her, sussing her out, it was good.

“[UFC 243] was huge for me. I sat there the whole time and had butterflies and goosebumps every time someone walked out. The crowd was just electric and every Aussie that walked out, the crowd just blew up and I just got this feeling that this is going to be me, that there is no question that this is what I want and this is my dream.

“And I just can’t wait to hopefully in the near future have the opportunity to fight in front of a home crowd.”

Hackett’s first assignment is to win her Contender fight against Victoria Leonardo, set for Nov. 17, and perform strongly enough to earn a UFC contract proper from White.

It’s a task made even more challenging by the COVID-19 pandemic, meaning Hackett faces quarantine both before and after the fight, resulting in an extended period away from home.

But she is prepared to do whatever it takes to come away with the win, in doing so replicating light heavyweight Australian Jimmy Crute in advancing from the Contender to the UFC proper.

“It’s just training, head down, bum up, getting through the work, just making sure everything is on point; I’m not going to be working as much so I can allow way more time for my training and recovery.

“I know I am going to go into this fight in the best shape that I have ever been.”