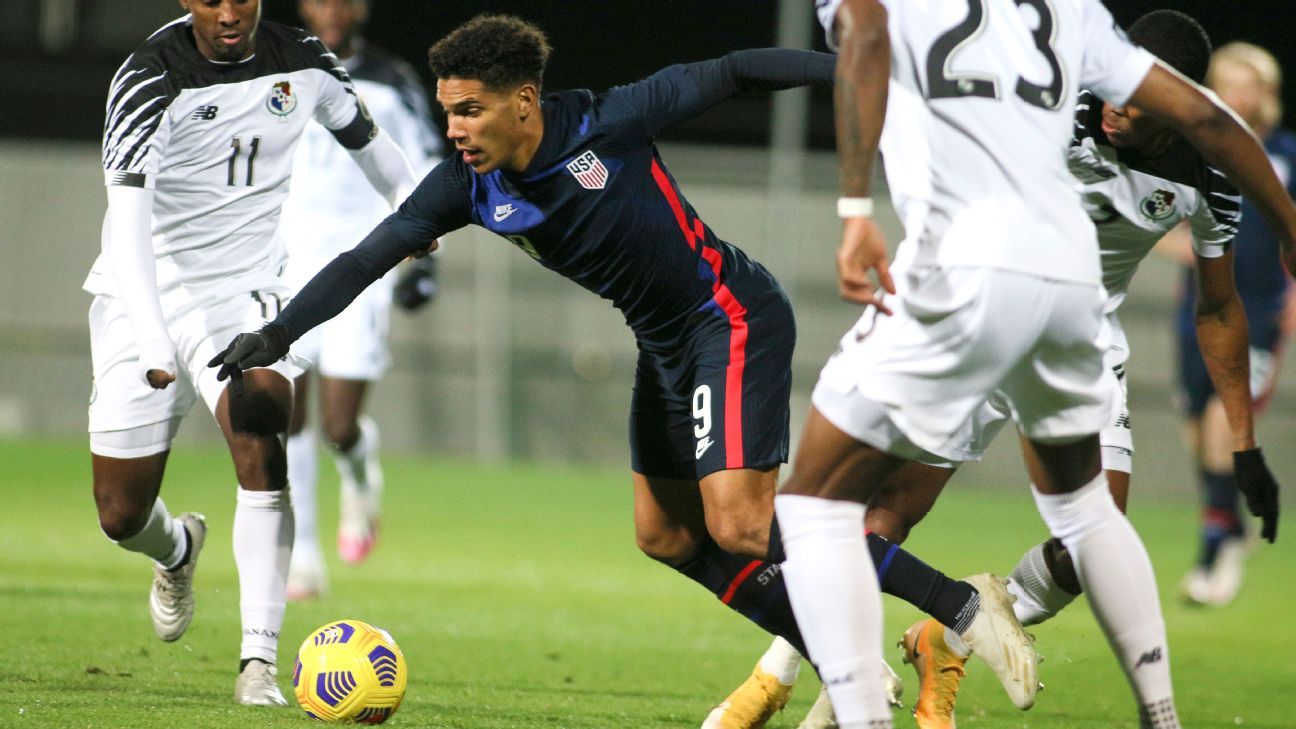 The worth of a forward is often in the eye of the beholder. A 30-yard-blast counts as much as a two-yard tap-in, even though the former is often what gets the hearts of fans beating faster.

There is value in both kinds of goals — not to mention link play and pressing — but the U.S. men’s national team was grateful for the two short-range tallies from Nicholas Gioacchini and another pair from substitute Sebastian Soto in a 6-2 friendly win over Panama on Monday.

Forward play — and really the lack of playing with one by virtue of using a false nine — was one of the main talking points following the 0-0 draw with Wales last Friday. The U.S. dominated possession but had little in the way of attacking thrust, especially in the box. Against a rebuilding Panama side, manager Gregg Berhalter decided to go with a more standard alignment, handing Gioacchini his first start.

“You could tell he was a little bit apprehensive,” said Berhalter about Gioacchini. “My job was just to give him confidence and tell him that he’s good enough and he showed it tonight.”

The Caen forward didn’t get on the ball much, just 18 touches in his 77 minutes of work. But he was in the right spots when it mattered, pouncing on a rebound in 22nd minute to put the U.S. ahead for good, 2-1, and then adding another four minutes later on a diving header following a slick buildup.

“I had a week that I’ll never, ever, ever forget,” Gioacchini said afterwards. But he was also already critiquing his own performance, which included a penalty that was saved by Panama goalkeeper Orlando Mosquera.

“My first impression I don’t think was a bad one,” he continued. “But I could have done way better for myself, been more available to the midfield even to the center-backs. In the box, I still had areas where I felt like I should have been five steps ahead of where you were, even two steps ahead. So you know it’s always something to review and to remember. But still, two goals is not easy for anyone.”

The day was just as memorable for Soto, who came off the bench to score two headed goals. In the process, he showed off his mobility and knack for being in good spots.

The play of both players hints that the depth at the forward position might be a bit deeper than originally thought, though context is needed. Mosquera looked very shaky on his international debut. It also seems unlikely that either forward will jump ahead of the likes of Gyasi Zardes or Jozy Altidore. That said, the impression made by both players was a positive one.

“For me it was a good performance by [Soto and Gioacchini],” Berhalter said. “But it’s important. When we talked last week about potentially the depth chart of the striker and forward position being limited, any chance you get you need to take it, and these guys did a good job.”

While the forwards delivered, the play of the team as a whole was a bit all over the place, filled with some sparkling play, and also some teachable moments. That was just fine with Berhalter, who was pleased to see his young side be exposed to how a game against a Concacaf opponent can play out.

“It was a very difficult game, a very physical game, more physical than the Wales game,” said Berhalter. “We needed that. The guys needed it. We had some guys calling for fouls. These aren’t going to be fouls. You’ve got to play on.”

The U.S. started the match almost asleep, lacking in defensive focus, only to be woken up by Jose Fajardo‘s eighth-minute header that gave Los Canaleros a shock 1-0 lead. The U.S. soon asserted control through its midfield, scoring three times in an eight minute span, with recent birthday boy Gio Reyna netting his first international goal courtesy of a free kick that was won by Yunus Musah.

In the second half, the U.S. then returned to sleep mode, as Panama ratcheted up its intensity and physical play. Weston McKennie, while excellent on the night, was lucky to stay on the field with a two-footed tackle on Panama’s Gaby Torres that only drew a yellow card. When Fajardo bagged his second of the night in the 79th minute with well-taken drive, there was a question of whether a team with plenty of debutantes on the field could see the game out. That they did, with Richie Ledezma assisting on both of Soto’s goal and Sebastian Lletget adding another.

Perhaps the biggest takeaway from this international window was the play of the U.S. central midfield. Once again, Tyler Adams, McKennie, and Musah shined. The task now is to convince Musah to stick with the U.S. for the long term. The two recent performances don’t cap-tie him to the U.S., and England have made it clear they don’t intend to let Musah go without a fight. The U.S. have been able to strike first, however, and that at least gets Musah pondering his options.

“All I’ve ever said about players in his category is that all we want to do is create an environment for them, that they want to be in, that they trust is a good environment for their development. And it seemed like that was the case for Yunus. It seems like he sees us as a pathway to continue to develop and play with a good young group. But in the end, it’s going to be him and his family that decide.”

Things are already looking up for the U.S. given how young players are beginning to establish themselves with their clubs. If Musah commits to the U.S., that feeling will only increase.