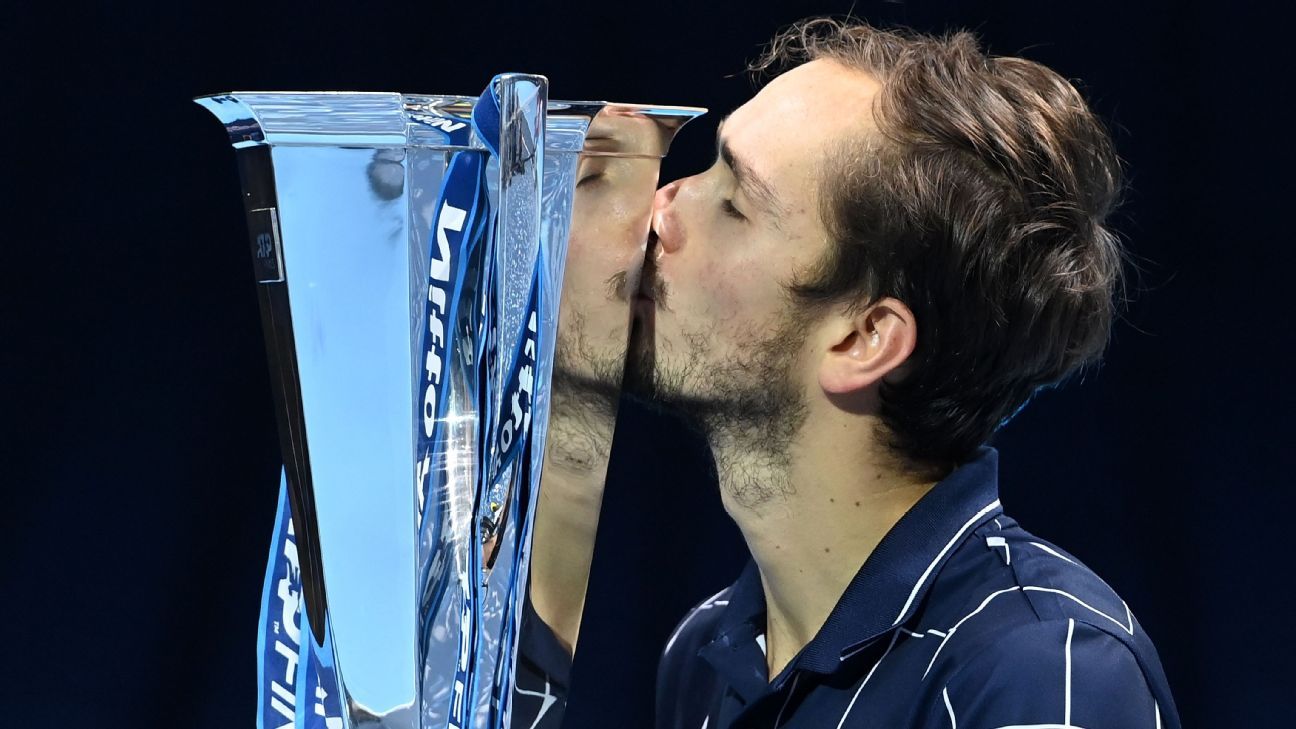 LONDON — Daniil Medvedev winning the season-ending ATP Finals over Dominic Thiem on Sunday was a fitting end to tennis’ year in which very little went to script and the unexpected seemed to occur on a tournament-by-tournament basis.

While Thiem, who had already won his first Grand Slam at the US Open in September and defeated top-seeded Novak Djokovic in the semis, was the favorite, Medvedev had different ideas.

In his thrilling 4-6, 7-6 (2), 6-4 victory against his old friend and sparring partner, Medvedev became the fifth successive player to win the ATP Finals for the first time, following in the footsteps of Andy Murray, Grigor Dimitrov, Alexander Zverev and Stefanos Tsitsipas.

“When you find that confidence, you have to keep it,” said Medvedev, who won the Paris Masters earlier this month. “It was the toughest victory in my life. … Hopefully I can handle more big titles in my career.”

After getting on the wrong side of the crowd at last year’s US Open, Medvedev decided his “new thing” will be not celebrating his victories; rather, he’ll greet wins like how he does losses.

“I think it’s unique in tennis,” he said. “In football I’ve seen some players who don’t celebrate their goals, so I don’t celebrate my victories — that’s my thing, and I like it.”

It was a match 10 years in the making for Medvedev. He and Thiem first met in Umag, Croatia, when Medvedev was just 14 years old. Thiem was already well established, having reached the final of the juniors at Roland Garros that year in 2011. Medvedev lost 2-0 that day on clay.

“I had crazy attitude on the court, like 10 times worse than right now,” Medvedev said. “He told me after the match, ‘You’re going to have a good future maybe, but you need to be a little bit more calm.’ Because I was going crazy.”

The O2 on Sunday was silent, England currently in lockdown amid the coronavirus pandemic. Restaurants and pubs are shut. Everyday life is restricted. For the tournament to occur, players were kept in a strict bubble all week, occupying the first two floors of a local hotel and seeing only those directly involved in this week’s tournament.

Some players said it was hard to stay focused on tennis throughout the year. Tsitsipas said earlier in the week that the whole experience had felt “very dark.” Thiem also said the process of motivating himself without the 18,000-strong crowd was “exhausting.”

On Sunday, Thiem won the first set 6-4, but Medvedev built himself into the game with his baseline play, picking the right moments to come to the net and using his serve to keep Thiem pinned back.

Medvedev saved break points to force a tiebreak in the nail-biting second set, winning seven unanswered points to force a third. He broke Thiem only once in the match — taking a 4-2 lead in the third — and managed to close it out from there, targeting Thiem’s backhand and dominating the net.

He took the time to reflect on his path after the match, remembering when he was ranked in the 300s in the world. He called Sunday’s 2-hour, 42-minute win “one of my best victories.”

There are no asterisks or caveats when it comes to Medvedev’s win. ‘Yes, but Roger Federer wasn’t there,’ or ‘So-and-so was off form,’ or ‘He hasn’t yet won a major.’

The shadow of the “big three” — Djokovic, Federer and Rafael Nadal — still looms over the men’s game, but, if anything, this tournament further sent a warning that other players are on their heels.

“We’ve proven we can beat the legends, the big three will still go for the big titles, but there will be a time when they retire and we will be the favorites for the big titles,” Thiem said. “For tennis, exciting times are coming. It’s our challenge to continue their story.”

What’s next? Scheduling-wise, it will be the Australian Open, but that is already shrouded in uncertainty with quarantine rules.

“I hope we’ll have many more matches like this,” Medvedev said.

So does the sport.