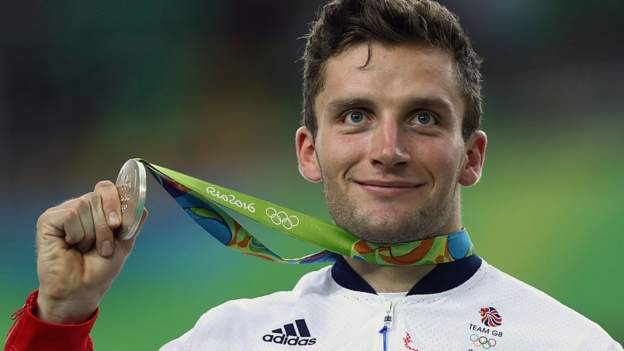 Scandals and controversies have followed British Cycling around like bikes on a track for quite a while now, the latest coming this month when a senior coach was sacked for gross misconduct.

In the wake of the announcement, Stephen Park, performance director for the governing body, tweeted about the values the team holds dear. For Callum Skinner, the Olympic gold medal winning Scot, it was a tweet too far. His response was interesting. “From this man (NOT THE ORGANISATION) this is rank hypocrisy.”

Skinner was in that system once. He has Rio gold to show for it. He also has a story of obsession and near self-destruction that led to it. He’s still only 28 but it’s almost like he’s led two lives. The things that have happened to him along the way? It’s difficult to get your head around it all.

He’s happier now. A campaigner for athletes’ rights, a businessman, an all-round more contented guy, but the back story is something else. As a kid he was hospitalised three times with asthma, the final attack coming on the back of a bout of pneumonia. He grew up dyslexic and like so many others he was at times dismissed as lazy or stupid at school. He got to the point he started to believe that narrative and the one place he could escape it was sport.

“I was like two different people. I remember when I was undiagnosed the teacher would ask the times table and we’d shout out the answers and I was completely useless. I was put out in the corridor with the smartest kid in the class and we weren’t allowed back in until he taught me how to do it. I had the stress of dealing with this teacher and this kid trying to teach me something I was fundamentally unable to get.”

With Skinner, the bike was the route to fame. In his late teens he was making strides when he got stung by a wasp and a lump developed on the side of his neck. He was in the cycling programme in Manchester and a touch lonely. When the medics said he had cancer the loneliness hardened into something altogether more serious.

“I felt my life was on hold and my team-mates treated me like the walking dead and I completely understand that. They didn’t know what to do or say. The diagnosis turned out to be false but the whole thing brought me to some dark places early on.”

Asthma, dyslexia, a cancer scare – it ain’t a good start, right? None of us knew the real story as it was developing, none of us could see inside Skinner’s head at the time. This is the tale of a driven sportsman and the dangers of that pursuit of greatness. Some can deal with it, some can’t.

He explains the single-minded focus by mentioning something he read about Arnold Schwarzenegger when he was in his pomp as a bodybuilder. Arnie was preparing for Mr Olympia, round about 1972. His father died while he was training for a competition. Instead of returning home for the funeral, he said he’d deal with the tragedy later. He had a medal to win.

Arnie told that story, then later denied it, but regardless, it still resonated with Skinner. The all-encompassing nature of sport? He knows all about it. “It’s a life or death mentality.”

‘My dad is gay and I excluded him’

In the build-up to Rio 2016, something happened that penetrated the bubble he had put himself in. Tipped for big things at the Olympics, Scott Skinner knew that his son would be the focus of much interest if the gold materialised. He also knew there was something he might not want to talk about when the national media came looking for heartwarming stories of his life.

“My dad is gay. I was always anxious about having a gay father and I excluded him, I know I did. Before Rio he said to me, ‘Look, if the media are asking, I don’t mind hiding the gay thing’. It still cuts me up now to think about it.

“I remember just feeling engulfed with guilt. Personally, I was delighted that dad was able to be himself and had found a husband and my brother was openly gay at that time as well. But when I first joined the cycling team I felt quite conscious about it.

“I had come from a bohemian school. We had no uniform, there was a photo of the head teacher dancing on stage with David Bowie without any shoes on, other kids had openly gay parents. When I went to Manchester I said to people on the team that my mum and dad weren’t married when they had me and I was shocked at their response.

“They said, ‘Oh, you’re like a real-life bastard’. I hadn’t thought of it that way before and it put me inside myself. How are they gong to react if I tell them I have two dads and a mum and a gay brother?

“When dad said that to me before Rio I realised this had gone on long enough. We did a big piece in the Gay Times about it. It was a fantastic piece.”

Two years ago, Skinner was invited to the White House to give a talk about anti-doping in sport. On Instagram he later published a photograph of himself wearing an LGBT rainbow laces pin badge while standing outside the office of vice-president Mike Pence – or as Skinner put it, “the second most famous homophobe in the building.”

Rio brought team gold and individual silver. All his dreams realised in days. But what do you do when you’ve achieved everything you want to achieve? “From 2016 to 2018 were the most dangerous years of my life. Suddenly, the distraction of the Olympics was no longer there and I was faced with a lot of issues from school, issues around the separation of my parents, dyslexia, other small things. My brother and I had a stupid near-death drowning experience on holiday in Holland and that started coming up for some reason. That was when we were 10.

“I had all these feelings about being inadequate, a bad brother, a bad son, a bad cyclist. Self-loathing. The time of realisation was at the Gold Coast Commonwealth Games in 2018. For the want of a better phrase, I had a mental breakdown after I got disqualified from the Keirin. I just felt a huge sense of embarrassment and my mood was starting to sink. It got to the point where the team doc was offering me emergency medication to get me through.

“There’s something about a mother’s intuition. She saw it. The life was completely vacant from my face. We just burst into tears. I later won a medal in the kilometre time trial. There are photos of me waving to the crowd but luckily we wear a visor and under that visor I was distraught, I found no pleasure or solitude in that achievement. After the Gold Coast, I went off grid.”

‘Most people were fantastic, one person made it horrible’

His mum, Judith, relocated her life to Manchester to help him. He found the courage to confide in a senior figure in British Cycling but it backfired. He won’t name the person, but that conversation effectively brought about his retirement from the sport and shone another light on some of the issues in the governing body.

“One person made it horrible. They had authorisation to give me time off and the response was that we can’t have all our athletes having a three-week holiday or else we wouldn’t have a team. That made me spiral. To have someone say that to me given how long it had taken to get me to the point to ask for a break was devastating. I had to try to explain what depression was and it was an inappropriate and surreal conversation to have.

“Most people were fantastic. I was always met with compassion, friendship and love, but that conversation finished me as a cyclist. That was 2019. Something you love turns into something you hate. What I’ve got now is my childhood love of riding my bike. I’ve got it back again. I’m so grateful for that.”

Whether it’s launching his own coffee business or being involved in a cycling sunglasses company or campaigning for athletes rights or speaking out on anti-doping, he’s a busy man. Skinner talks compellingly and fearlessly about professional sport, about the failings of WADA and corporate governance and the need for clean athletes to be treated with more respect. He’s a quite brilliant communicator.

“What has happened since retirement is that I’ve cast that net wide open again. I’m doing lots of different things and I’m happier. The gold medal, I’m proud of it now and that wasn’t always the case. I wish I’d looked after it better. It’s in a terrible state. Chipped and everything. More than anything I’m glad I faced my issues head on, I didn’t shy away, I didn’t continue to bury my head in the sand.”

At 28, a whole new life has opened up in front of his eyes.