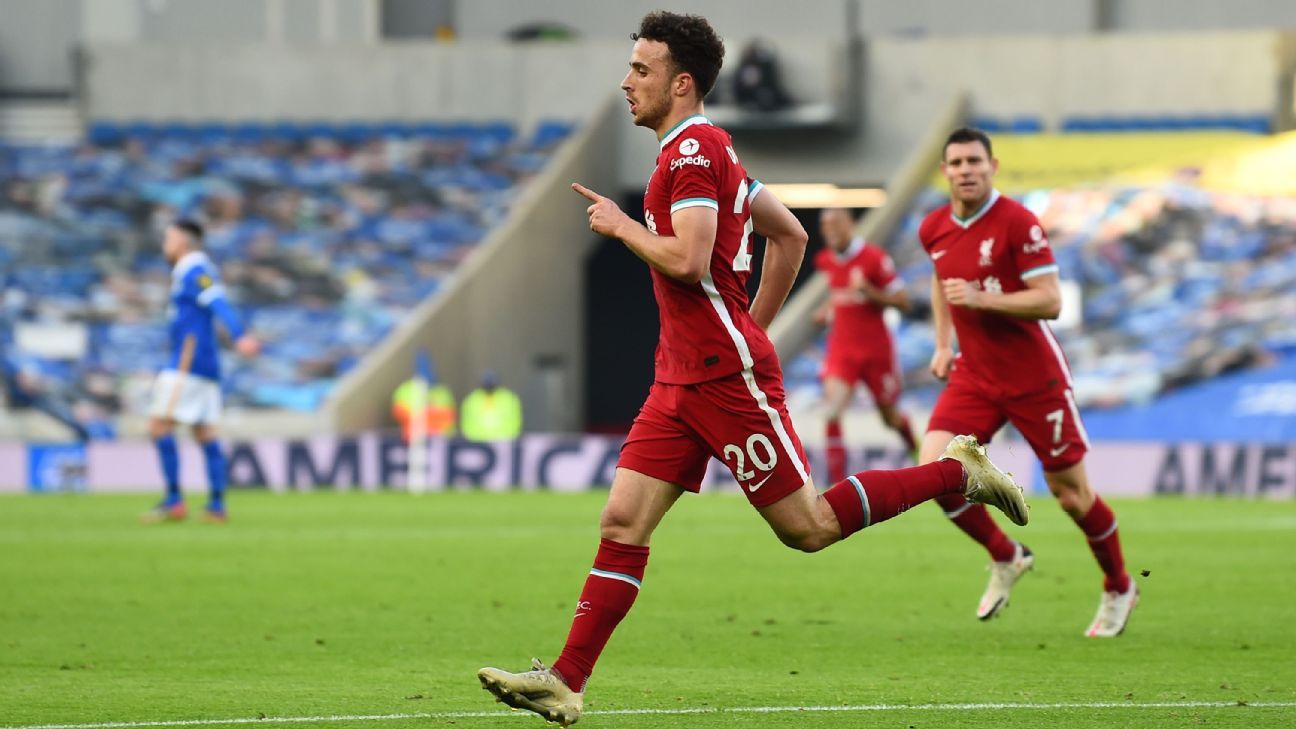 Liverpool missed the chance to go three points clear at the top of the Premier League as a late Pascal Gross penalty cancelled out Diogo Jota‘s strike to earn Brighton a 1-1 draw at the Amex.

The Reds were let off the hook twice as Aaron Connolly went close and Neal Maupay fired wide from the spot, while VAR ruled out efforts from Mohamed Salah‘s and Sadio Mane for offside.

Jota’s smart finish through a crowded penalty area — his eighth in as many games — looked to be enough as the game entered stoppage time, but Andy Robertson was deemed to have fouled Danny Welbeck in the 92nd minute and Gross struck a dramatic leveller.

The reigning champions were much better in the second half and Jota’s ninth goal in a Liverpool shirt was still enough to send his side top of the league ahead of the weekend’s remaining fixtures.

You can’t give away two penalties in a game and expect not to be punished, and Klopp will be frustrated by his side’s lack of defensive discipline. Connolly was near impossible to contain too, but Gross’ late penalty will have flattened the Reds.

Jurgen Klopp, 7 — Normally the life and soul of the party, the Liverpool boss looked a frustrated figure at the interval. His introduction of Jordan Henderson was exactly what was needed and completely lifted his side, but his annoyed demeanour after the match said it all.

GK Alisson, 6 — The Liverpool No. 1 once again had to come flying off his line to smash the ball away from the lurking Connolly before Danny Welbeck‘s strike was straight down the goalkeeper’s throat, but he was comfortably beaten from the spot by Gross.

DF Neco Williams, 5 — Another big opportunity for the young defender who will have been relieved to see Maupay fire wide from the spot after he clumsily clipped the heels of the troublesome Connolly.

DF Nathaniel Phillips, 6 — A second Premier League appearance for the 23-year-old who won an important aerial battle with Maupay to settle any nerves and later produced an important challenge, but found himself busier than he was probably expecting thereafter.

DF Fabinho, 6 — The versatile Brazilian partnered Phillips in a somewhat unfamiliar centre-back pairing. He picked out Salah’s early run with a classy 40-yard pass, but was caught unawares as Connolly burst through on goal and he struggled with the Irishman’s pace.

DF Andy Robertson, 5 — We’re so used to seeing the Scot sprinting down the left, but it was his ability to switch the play that caught the eye this time with a breath-taking pass to find Roberto Firmino. He would have had an assist too had Mane set off a split-second later, but he was harshly deemed to have fouled Welbeck in the box.

MF James Milner, 7 — It was a typically robust performance from the experienced midfielder who looked equally steady at right-back, although Klopp will be sweating on his fitness after the 34-year-old had to be withdrawn with an injury.

MF Georginio Wijnaldum, 6 — It was a disappointing first half for the Dutchman who was forced to sit against the tireless hosts, but Henderson’s arrival allowed him to play with more freedom as Liverpool regained control.

MF Takumi Minamino, 6 — A quiet first half from the Japan international who saw a couple of crosses repelled by the Seagulls defence before Matt Ryan comfortably held onto his effort from outside the box, but he improved noticeably after the break.

FW Mohamed Salah, 7 — After an unde-rpar performance against Atalanta he looked a menace from the off at the Amex one and, after VAR had ruled out his own strike, he neatly unleashed Jota who fired into the corner.

FW Roberto Firmino, 6 — So often the mastermind behind Liverpool’s impressive link-up play, he often looked to pick the ball up in space on the right and flicked a delightful ball over the top to assist, but the Egyptian was fractionally offside.

FW Diogo Jota, 7 — After a lightning start to his Liverpool career, it took him just 78 seconds to get the run on Ben White, but he couldn’t quite pick out Salah. First-half chances were limited thereafter, but he stole the headlines again after the break with an excellent finish.

MF Jordan Henderson, 6 — After a first half in which the visitors were crying out for their skipper and his introduction at the start of the second completely settled the visitors.

MF Curtis Jones, NR — The 19-year-old wasn’t deemed fit enough to train yesterday, but he was still called upon for the final stages as James Milner became the latest name on an ever-growing injury list.

FW Sadio Mane, 6 — Replaced Salah — who wasn’t best pleased about it — just past the hour mark, but he was good value for his introduction, although his bullet header was again chalked off by VAR.