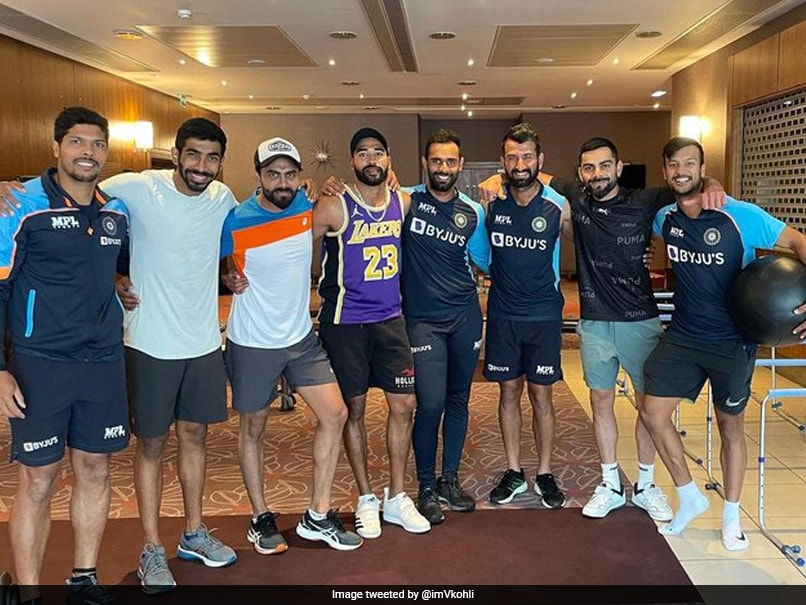 England vs India: Virat Kohli was all smiles as he posed with India teammates.© Virat Kohli/Twitter


India captain Virat Kohli posted a picture on social media on Sunday where he is seen with India Test teammates Umesh Yadav, Jasprit Bumrah, Ravindra Jadeja, Mohammed Siraj, Hanuma Vihari, Cheteshwar Pujara and Mayank Agarwal. The Indian Test team is in England to play a five-Test series, starting with the first game at Trent Bridge, Nottingham from August 4. “Work done”, wrote Kohli as caption, with an emoji indicating a workout session that the India players had. The Indians finished a three-day warm-up match against a Select County XI recently and Rahul, Jadeja and Umesh returned with noteworthy performances.

The Indian team has been in England since arriving there ahead of the World Test Championship final in June. India lost to New Zealand in the final played at the Hampshire Bowl, Southampton from June 18 to 22.

The players were on a break after the final concluded and assembled in London a few days before their departure to Durham for the warm-up match.

In the meantime, wicket-keeper batsman Rishabh Pant and training assistant Dayanand Garani tested positive for COVID-19 at different stages and had to be isolated from the rest of the team.

Beside the Covid scare, India were also hit by injuries with the likes of Shubman Gill, Avesh Khan and Washington Sundar all reported to have been ruled out of the tour with injuries.