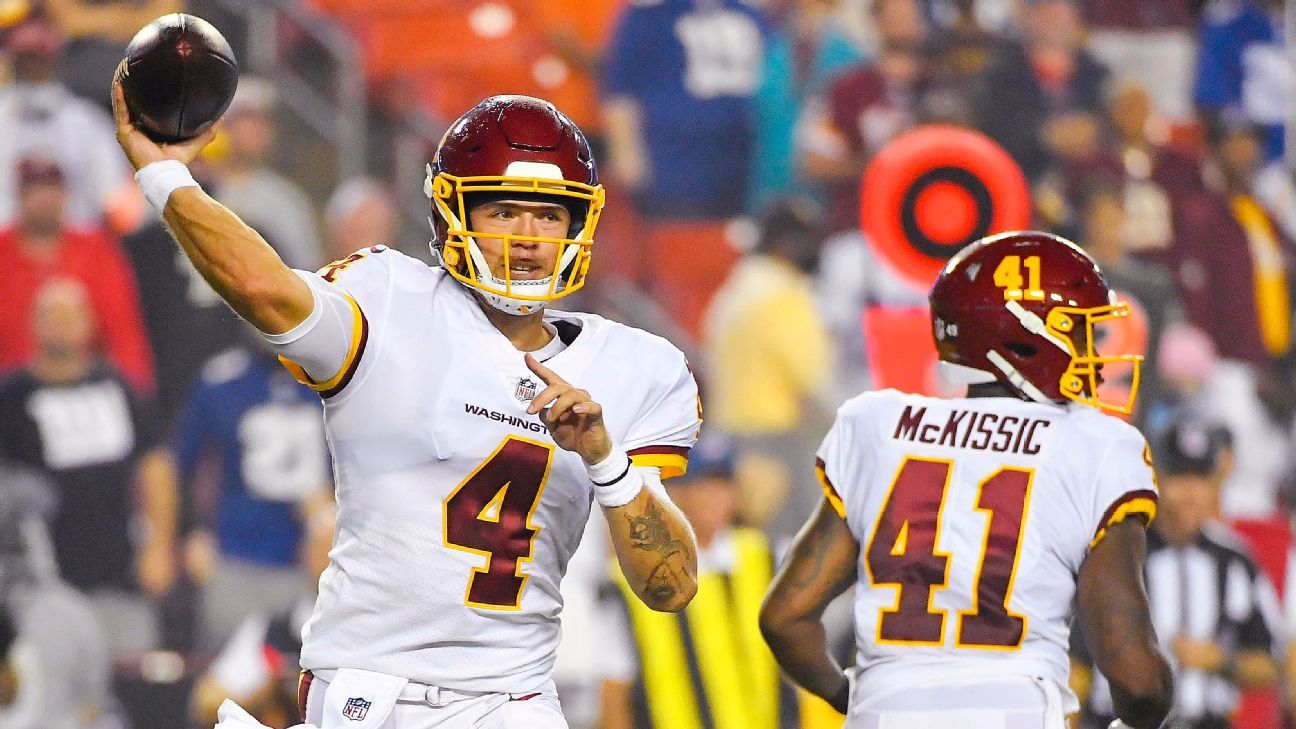 LANDOVER, Md. — The Taylor Heinicke love affair in Washington is about to bloom in full force. Just when it looked like the fan favorite had made a crucial mistake, he recovered to lead a stirring rally.

The Washington Football Team quarterback fueled a comeback win over the New York Giants in the third start of his roller-coaster career. He led a two-minute drive, capped by Dustin Hopkins’ 43-yard field goal at the buzzer for a 30-29 victory. Hopkins had missed from 48 yards, but New York was penalized for being offsides.

Washington evened its record at 1-1 with a road game at Buffalo next week in Heinicke’s first start subbing for the injured Ryan Fitzpatrick, who will miss six to eight weeks with a right hip subluxation. Heinicke had lost the previous two starts in his career, including a three-interception game vs. Atlanta for Carolina in 2018.

But this night belonged to Heinicke. He completed 34-of-46 passes for 336 yards and two touchdowns. His lone interception nearly wrecked the day, an ill-advised pass that James Bradberry picked off deep in Washington territory. It led to a field goal and Giants’ lead.

Only minutes earlier, Heinicke’s 18-yard touchdown pass to Ricky Seals-Jones with four minutes, 33 seconds left gave Washington a 27-26 lead. He lofted a perfect pass to the backup tight end, who made a leaping catch. It happened one play after Heinicke hit running back J.D. McKissic with a soft toss down the right sideline for 56 yards.

But he gave Washington’s fans what they had been wanting. They had fallen in love with Heinicke late last season when he threw for 306 yards and a touchdown in a 31-23 playoff loss to Tampa Bay. He also made a diving touchdown run. His grit energized the players, notably receiver Terry McLaurin and end Chase Young.

But his play has helped spark Washington whenever he’s been in the game.

On Tuesday, Young said one reason he liked Heinicke was because he never looked rattled. That was the case Thursday. He struggled on Washington’s first couple possessions before getting hot.

Perhaps the most impressive part: He didn’t buckle after his big mistake. Instead, he did what he’s done throughout his career: overcome adversity. And Washington benefitted.