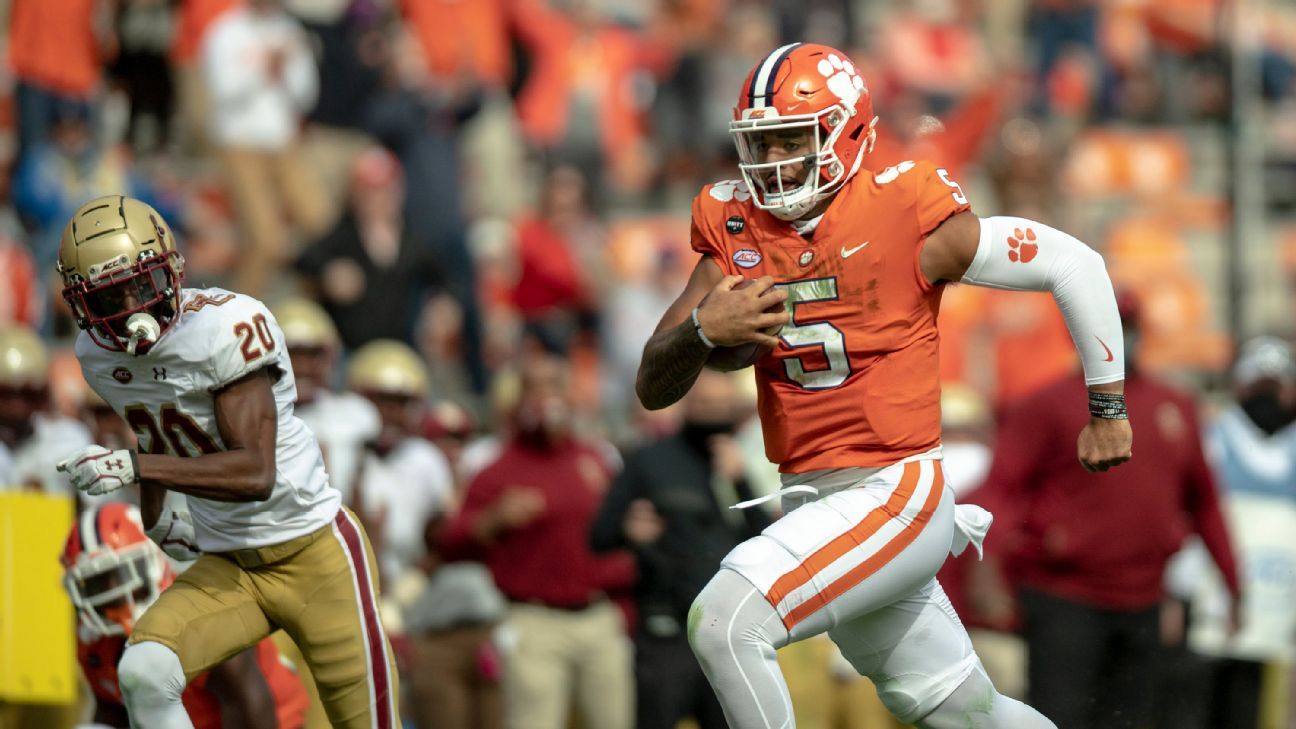 Clemson remained No. 1 in The Associated Press college football poll on Sunday, but not by much.

Trevor Lawrence‘s absence because of COVID-19 and the Tigers’ narrow win over Boston College created a divide among the 62 writers and broadcasters on the voting panel.

Clemson received 33 first-place votes — 19 fewer than last week — and has only a two-point lead over No. 2 Alabama heading into a huge ACC matchup at fourth-ranked Notre Dame this week.

Alabama, which handed Mike Leach his first shutout loss as a head coach with a 41-0 victory over Mississippi State, got the 29 other first-place votes.

The rest of the top five remained the same, with Ohio State at No. 3, followed by Notre Dame and Georgia.

Voters had differing opinions on how to handle Clemson. Six voters who had Alabama No. 1 on their ballots had Clemson third behind Ohio State.

Lawrence was ruled out of the game against Boston College after testing positive for COVID-19, and coach Dabo Swinney announced that his Heisman Trophy front-runner wouldn’t play against Notre Dame, either.

Clemson made up an 18-point deficit in the second half to beat BC 34-28. Five-star freshman D.J. Uiagalelei made his first start and got better as the game went on as Clemson pulled off its largest comeback for a home win in program history.

Alabama made easy work of Mississippi State and has now scored 35 or more points in 19 straight games, the longest streak in the FBS.

Liberty, which was idle Saturday, beat out Northwestern for the No. 25 spot. Hugh Freeze’s Flames are 6-0 against mostly light competition. Their biggest test so far comes this week at Virginia Tech.

The last time Penn State was unranked was Oct. 16, 2016. The next week, the Nittany Lions upset Ohio State in Happy Valley, then appeared in 63 straight polls in which they were eligible. (Big Ten teams were removed from consideration for two polls this year because of their coronavirus-delayed season.)

Cincinnati, at No. 6, has its highest ranking since it finished the 2009 regular season No. 4.

No. 22 Texas beat Oklahoma State in overtime for its first road win against a top-10 team since 2010 and is back after a three-week absence.

No. 24 Auburn returned after two weeks following its rout of LSU.

No. 25 Liberty’s schedule gets tougher now, with Virginia Tech, NC State and Sun Belt Conference phenom and No. 15 Coastal Carolina still to come.

North Carolina has lost two of three and dropped out for the first time this season.

Penn State’s absence might be temporary, with winnable games against Maryland and Nebraska up next.

The only conference without representation in the Top 25 is the Mid-American, which begins play Wednesday.

No. 9 BYU at No. 21 Boise State, Friday: Third-string QB Baylor Romney orchestrated BYU’s upset of the Broncos last year. Zach Wilson will be leading the Cougars’ effort to win in Boise for the first time.

No. 8 Florida vs. No. 5 Georgia in Jacksonville, Florida: The Bulldogs will go for a fourth straight win in the series but need to be sharper than they were against Kentucky.

No. 1 Clemson at No. 4 Notre Dame: Another “biggest game of the year” — until the next one. Uiagalelei takes his show on the road while Lawrence remains in the COVID-19 protocol. The Irish defense has been tough, but the Tigers are a different animal.