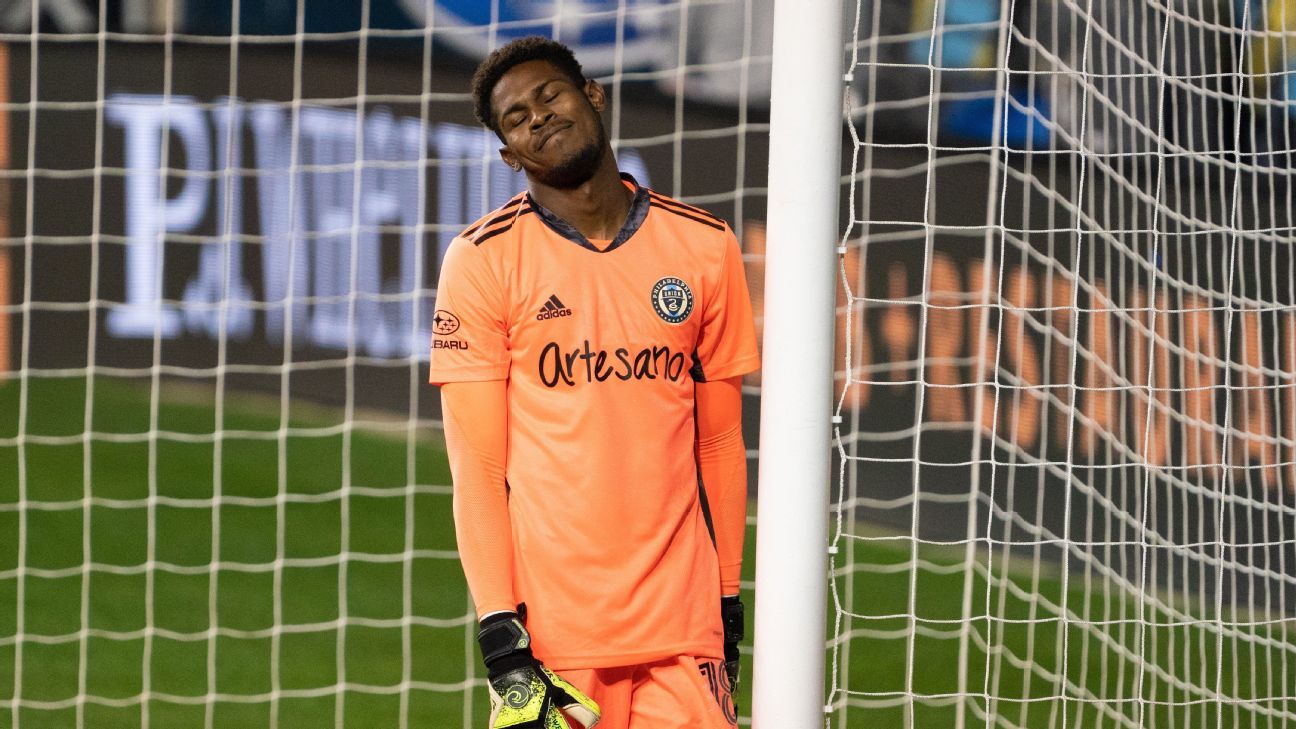 The Philadelphia Union could’ve lifted the Supporters’ Shield on Sunday. They needed to beat Columbus, or at least a draw, and some help from Inter Miami — and elsewhere. Alas, they fell to an 84th-minute defeat to the Crew, and to make matters worse, they didn’t get any help from Miami, who lost to Toronto FC. And now, with the league announcing last week that the Shield and playoff places would be determined by points per game, as positive COVID-19 tests cause cancellations and postponements of games across the league, the Union and the Reds sit atop the standings: 22 games played and 2.00 points per game. Only goal differential separates the pair, so as long as Philly can match or better Toronto’s Decision Day result, it will be crowned the league’s regular season champion after all.

With a smattering of midweek games and Decision Day on Sunday remaining, here’s how the remainder of the league stacks up in the final edition of MLS Power Rankings for the 2020 season.

Sunday’s loss to Columbus was just Philadelphia’s second in its past eight games, but it cost the club dearly. Now the Union will need better Toronto’s result on Sunday when they host New England if they want to lift the Supporters’ Shield that’s had their name written on it for the past month. Oh, and they’ll need to do it without star goalkeeper Andre Blake, who suffered a fractured hand in Wednesday’s win over Chicago.

A second Supporters’ Shield in four seasons could be Toronto’s with a win at Red Bull Arena and some help from New England. Few would’ve predicted that a week ago when the Reds were coming off the back of a 5-0 hammering at the hands of league-leading Philadelphia.

While SKC’s match with Minnesota was cancelled following two members of the Loons’ first team testing positive for COVID-19, a midweek win against FC Cincinnati clinched a spot in the postseason with Roger Espinoza the hero. Alan Pulido showed off his playmaking skills as well.

Heading into 2020, the Timbers needed better wing play beyond that provided by Sebastian Blanco, and they’ve gotten it from Yimmi Chara, who has delivered with four goals and seven assists since mid-September. A pair of wins has Portland top of the West by a whisker.

This season marked the first time Orlando has qualified for the MLS Cup playoffs. This season also marked Orlando’s first win over rivals Atlanta United following three years (nine contests) without a victory. The Lions got their second just two months later with Wednesday’s 4-1 demolition of the Five Stripes. Oscar Pareja has instilled a sense of ferociousness and pride in Central Florida not seen before in the club’s previous five years of MLS existence.

With a chance to claim the top spot in the West at stake, Seattle delivered a subpar performance against Colorado on Sunday with almost its entire first-choice lineup. There’s time to rescue the situation, but the Sounders will need some help.

A pair of wins over Supporters’ Shield-chasing Toronto and playoff-contending rivals Red Bulls have given NYCFC some breathing room, ensuring they’ll be spared the Eastern Conference’s play-in round pitting seeds seven through ten against one another for places in the playoffs proper.

The momentum LAFC generated by their win over Houston was slowed when their game against San Jose was postponed — for now — due to positive COVID-19 tests. Bob Bradley will be hoping that Carlos Vela can continue his return to form during the regular season’s final week.

Sunday’s win over league-leading Philadelphia was just Columbus’ second in its past eight games. Those three points keep the Crew in Columbus once the postseason gets underway — at least for the first round.

After being shut out in a midweek defeat to the Red Bulls, the Revs eked out a 4-3 comeback win over D.C. United on Sunday — a club whose points-per-game record is better than only Cincinnati’s. It’s decidedly midtable form for an outfit sitting 12th in the 26-team table.

The Loons received a bit of good fortune against Colorado, with an own goal turning into a late winner, but another bout with COVID-19 saw Minnesota’s game with Kansas City canceled. Osvaldo Alonso‘s latest injury is another big concern heading into the postseason.

Nashville became the fourth team in the expansion era to qualify for the MLS Cup playoffs in its inaugural season with last Tuesday’s win over Montreal. With some help from league-leading Philadelphia, they could leapfrog New England and bypass the East’s play-in round with positive results against Dallas and Orlando.

A pair of wins over Miami and Houston were enough to put FCD in the postseason. Ryan Hollingshead has quietly put together a solid season at left-back, and grabbed the game-winner against Miami last Wednesday.

Sunday’s match with LAFC was postponed, but the Quakes did the critical work in midweek when they beat Real Salt Lake 2-0, putting them in solid position to make the playoffs. Chris Wondolowski remains a wonder after netting his fifth and sixth goals of the season.

Wednesday’s 1-0 win over New England has the Red Bulls in the postseason for the 11th straight year. They followed it up by getting blown out 5-2 by rivals NYCFC, though, and with two wins from their past eight, it’s hard to imagine the New Jersey natives making much noise in the playoffs.

Since returning from their COVID-induced hiatus, the Rapids have found the going difficult, but a 3-1 win over Seattle got Colorado back to winning ways, with the team’s prowess from set pieces returning at the perfect time.

Taking one point from a week of games against Philadelphia and Nashville, Chicago occupies the East’s final play-in place. Much can change on Decision Day, with five clubs contesting ninth and tenth place in the conference separated by just 0.10 points per game. A midweek trip to Minnesota and hosting NYCFC on Sunday will prove a tall order for the Fire, but for the time being, they hold on to a postseason place.

The Caps put in a credible effort, but the Timbers just have more quality in key parts of the field. The playoff hopes are still alive, but only if San Jose makes up its game against LAFC.

Major League Soccer is on ESPN+. Seattle is the champion of the 26-team league, which added Nashville and Miami to the fold in 2020.
ESPN+: Live games and replays (U.S. only)
MLS home | Schedule | Standings

Montreal’s in the same position as Chicago: in a playoff place, but with four other teams in range of laying claim to it. But having lost nine of twelve and not playing a game at Stade Saputo since Sept. 9, it’s not difficult to envision the Impact falling short of the postseason in Thierry Henry‘s first season in charge of the club.

D.C. deserves its rise in the rankings following its narrow win over contending Columbus and heartbreaking late defeat to New England, but that United still have the second-worst points-per-game ratio in the league despite going 3-1-2 since Ben Olsen’s dismissal as manager demonstrates how large a hole the club had dug itself this year.

Atlanta was humbled by rival Orlando on Wednesday, but rebounded for a 2-0 win over Cincinnati. The victory over the league’s worst side was just the FIve Stripes’ second in their past nine games, with the only other three points coming against hapless D.C. United.

The Guillermo Barros Schelotto era ended with a whimper while the (latest) Dominic Kinnear era began with a win and — surprise! — a lot more defensive organization. The scant playoff hopes are still alive, but alas, Jonathan dos Santos is injured again.

Goals from Designated Players Rodolfo Pizarro and Blaise Matuidi in the past week gives Miami some return on their sizeable investment, but both goals came in losses to Dallas and Toronto. The third of Inter’s high-priced DPs, Gonzalo Higuain, hasn’t scored since Oct. 7, while fellow expansion outfit Nashville has quietly qualified for the playoffs without any of the glitz, glamor or corresponding expectation that’s proven debilitating for Miami.

RSL has been trending downward all month, and on Sunday their faint playoff hopes were finally extinguished with a 2-1 loss to the Galaxy. And with Sam Johnson and the club parting ways, at least now the search for a new striker can officially begin.

The Dynamo’s playoff hopes are officially done after a loss to Dallas, a match in which Houston lost far too many individual battles in the box. The Dynamo front office has a lot of work to do during the offseason to revamp the team’s defense.

Two games, two shutout defeats for Cincinnati. FCC will need to score four times in Miami to avoid the ignominious title of the lowest-scoring team in MLS history (held by 2013 D.C. United at 0.65 goals per game) with a goals-per-game average dipping to just 0.50 following their latest losses.