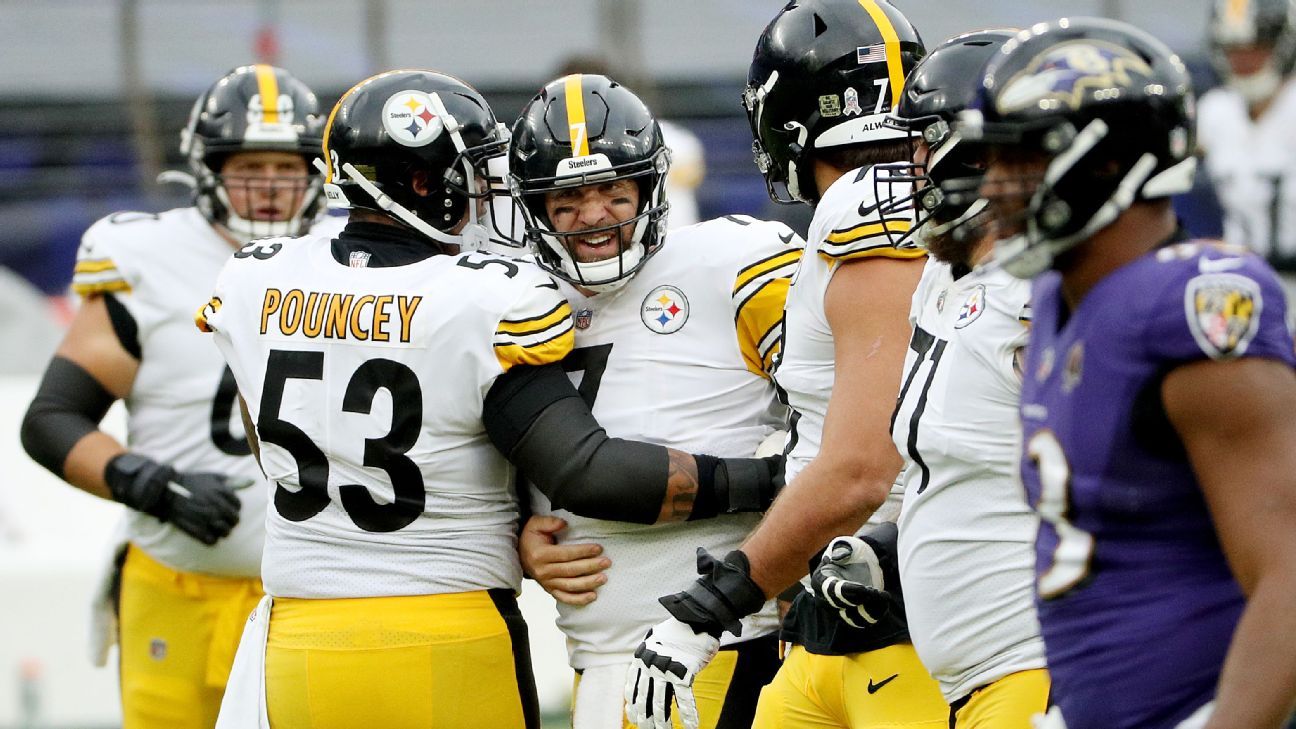 Week 8 in the NFL was action-packed. In an intense AFC North battle, the Steelers held off Lamar Jackson and the Ravens’ offense in the final minute to move to 7-0 on the season. The Vikings got by the Packers on a massive day from Dalvin Cook. And the Chiefs blew out the Jets with five passing touchdowns and more than 400 yards from Patrick Mahomes. Tua Tagovailoa got his first NFL win, Joe Burrow and the Bengals upset the Titans and the Patriots fumbled late in a comeback attempt against the Bills.

All that and more in Week 8‘s biggest takeaways from NFL Nation.

The Steelers pulled it together in the second half to remain the NFL’s only undefeated team and match the best start in franchise history at 7-0. It was an admittedly ugly win that came down to two stops in the final minutes of the fourth quarter and a second-half surge by QB Ben Roethlisberger, who completed just 4 of 10 passes in the first half. “You’re going to be up against it if you don’t play good,” coach Mike Tomlin said. “We can’t allow the emotions of the moment for us to miss that fact. I’m proud of these guys, proud of the fight, I’m proud of how they supported one another, but it’s important that we don’t lie to ourselves. We did not function well in a lot of ways today.” — Brooke Pryor

Lamar Jackson continues to struggle in the biggest of games this season. The Baltimore quarterback turned the ball over four times, including his first career pick-six on the opening drive, in losing to the Steelers. “The turnovers, I feel, are the reason why we lost the game,” Jackson said. “I put that on me.” This comes after Jackson threw for a career-worst 97 yards in a loss to the Chiefs in Week 3. It’s not going to get any easier for Jackson, who lost All-Pro left tackle Ronnie Stanley to a season-ending ankle injury on Sunday. — Jamison Hensley

The Vikings won’t be looking to sell at the trade deadline. Minnesota is 2-5 after beating Green Bay and will aim to ride the momentum of this upset win into its upcoming games against Detroit and Chicago, both of whom look beatable. Selling off veteran assets helps Minnesota long term but would impact the team making a run now, so expect the Vikings to stay stagnant if they truly feel they’re able to get back in the playoff picture. Week 8’s victory won’t mean anything down the road if the Vikings can’t string together more wins. A model for Minnesota: The Colts started the season 1-5 two years ago and finished 10-6. It’s not a truly impossible feat, especially with Minnesota’s upcoming slate of games. — Courtney Cronin

Packers coach Matt LaFleur had a pretty good idea the Vikings were going to ride Dalvin Cook as much as possible, given the windy conditions at Lambeau Field on Sunday. It didn’t matter because his defense under coordinator Mike Pettine had no answers for the Minnesota running back, who had 226 yards from scrimmage and all four Minnesota touchdowns. What’s worse, it’s the same formula the 49ers used to beat the Packers in last year’s NFC title game. And guess who the Packers play next? “We better get it fixed, and we better get it fixed fast because I have a pretty good idea of what’s going to happen on a short week on Thursday in San Francisco as well,” LaFleur said. — Rob Demovsky

The Dolphins have a top-10 defense and are finding their way on offense and special teams. Miami (4-3) has now won three consecutive games (against the 49ers, Jets and Rams) by double-digits and has given up an average of 11.3 points per game over those contests. With Tua Tagovailoa at quarterback now, the Dolphins are going to get a lot more eyeballs. But the most impressive part of this team is how coach Brian Flores turned it around from an NFL laughingstock to a team in the playoff hunt within one year. Can the Dolphins keep it going with a favorable schedule over the next five weeks? We’ll see. — Cameron Wolfe

The Rams’ offense couldn’t handle the pressure brought by the Dolphins’ defense in a loss that drops them to 5-3 as they enter a Week 9 bye. The Rams must now spend the week figuring out who they are — after the offense committed four turnovers Sunday — and how they will forge a path forward with a schedule that only gets more difficult. They swept the NFC East in the first half of the season, but they produced only one win against a team with a winning record (a 24-10 victory over the Bears in Week 7). After the bye, the Rams play host to division rival Seattle before they travel to Tampa Bay to take on Tom Brady. — Lindsey Thiry

The Bills have finally gotten past New England after losing seven consecutive games to the Patriots dating back to 2016. The win was tougher than it should have been, but a victory nonetheless, as Buffalo moves to 4-0 in the AFC East. Devin Singletary and Zack Moss (167 combined rushing yards) looked like the backfield tandem the Bills hoped for, and the team’s struggling run game appears to be on track heading into next week’s game against Seattle. — Marcel Louis-Jacques

Devastating. Quarterback Cam Newton‘s lost fumble in the final minute was a heartbreaker because, at worst, the Patriots were in position to push the game to overtime. Coach Bill Belichick made the point that the Patriots have been in that position three times this season — a chance for a fourth-quarter comeback — and haven’t capitalized on any of them. Knowing that was the strength of their former quarterback, Tom Brady, makes it sting a bit more. — Mike Reiss

The deep ball is back in the Chiefs’ offense. Quarterback Patrick Mahomes completed a season-high five passes of 25 or more yards, with four going for touchdowns. Mahomes had just 11 such passes in the first seven games, including two in the last two games. With previous opponents determined to take away the big play, the Chiefs had to rely on their running game and shorter passes until Sunday. Mahomes also became the fastest player to 900 career fantasy points in history (39 games). — Adam Teicher

The Jets fell to 0-8 with a predictable loss to the Chiefs. That’s one loss shy of the worst start in franchise history. Their offense is a dumpster fire, as it produced 191 and 221 total yards in the past two games, the lowest totals of the season. Only seven times in 24 games under Adam Gase have they topped the 300-yard mark. His tenure has been an unmitigated failure. — Rich Cimini

Derek Carr, cold weather warrior? Three weeks after exorcising his Arrowhead Stadium demons, the Raiders quarterback tackled another bugaboo in blustery Cleveland on Sunday. Before beating the Browns, Carr had been just 1-10, averaging 204 yards passing with nine TDs and 11 interceptions in games in which the temperature was 45 degrees or colder at kickoff. Sunday in the Dawg Pound, it was 43 degrees with a wind chill of 31 degrees and wind gusts of 35 miles per hour. Dragon slayed, with Carr directing a conservative if dominant ground game that chewed up clock while passing for 112 yards, running for another 41 and protecting the football. — Paul Gutierrez

The bye couldn’t be coming at a better time. Plagued by weather — and the inability to get off the field — Cleveland lost to the Raiders, who handled the elements better while controlling the clock and the line of scrimmage. Despite Sunday’s setback, the Browns (5-3) remain in solid shape to finally snap the longest playoff drought in the league. And with wide receiver Jarvis Landry (ribs), QB Baker Mayfield (ribs), tight end Austin Hooper (appendix, out since last week), running back Nick Chubb (knee, out since Week 4) and most recently star pass-rusher Myles Garrett (ankle, knee) ailing, the upcoming bye week will help them heal up for the stretch run. — Jake Trotter

The Colts took care of the weaker part of their schedule by beating Detroit to move to 5-2 for the second straight season, but now they’re about to find out what type of team they really are because their next four games — Baltimore, at Tennessee, Green Bay and Tennessee again — are against teams that are all 5-2, too. The two games against the Titans could go a long way in determining who wins the AFC South. — Mike Wells

The Lions in many ways showed exactly what they are Sunday: a team that can beat the teams at the bottom of the league but are going to largely struggle against anyone who is a contender. Detroit lost its seventh consecutive home game Sunday against Indianapolis, and it felt in many ways like the team’s loss to Green Bay in Week 2: The Lions take an early lead and then the combination of offensive ineptitude, defensive miscues and a special teams gaffe lead to a loss. And in Detroit, it’s been a look the Lions have shown far too often under Matt Patricia in games they need to win to keep things going in a positive direction. Patricia again lamented his team’s lack of consistency, but that’s a trademark of Patricia’s teams in Detroit. — Michael Rothstein

The Bengals’ win snapped a three-game losing streak, provided some calm after weeks of unrest and potentially set the foundation for the rebuild under rookie quarterback Joe Burrow. It came days after Cincinnati traded veteran defensive end Carlos Dunlap after a prolonged public rift with the coaching staff and John Ross III‘s confirmation of a trade request out of Cincinnati. That prompted a few long-term questions about the franchise. However, Burrow and the Bengals calmed all of that by beating the AFC South leaders. For the first time under second-year coach Zac Taylor, the Bengals beat a team with a winning record. It was a win the Bengals desperately needed in many ways and one that can set the tone for a strong finish to Burrow’s rookie season. — Ben Baby

The Titans’ woes in last week’s loss to the Steelers carried over to this week’s loss to the Bengals. The defense was unable to get to the quarterback, even though Cincinnati was playing with four backup offensive linemen and had allowed 28 sacks in seven games. The struggles on defense allowed Burrow to connect with his receivers multiple times for big plays. A leaky third-down defense also factored into the loss. Tennessee has now lost two consecutive games and needs to find its swagger once again as it prepares to host the Bears next week. — Turron Davenport

Matt Ryan hopes Thursday’s victory in Carolina can be the spark for yet another second-half surge. The Falcons (2-6) had just that in 2019, following up a 1-7 start with a 6-2 finish that included victories in the final four games. It won’t be easy to repeat. They have a winnable game against Denver next week, but after their bye, they play New Orleans twice in a three-week span. Then there’s two games against Tampa Bay and one against Kansas City, as well, in addition to games against the Raiders and Chargers. The Broncos and Chargers are the only opponents remaining with losing records. — Mike DiRocco

Can Christian McCaffrey save the day? Atlanta forced Teddy Bridgewater to try to beat them by loading up the box and keeping him under constant duress. Bridgewater couldn’t get it done alone in the loss to a team that hasn’t been able to stop anybody. If McCaffrey returns from IR next week against the Chiefs, it will be tougher for defenses to put it all on Bridgewater. McCaffrey will make them pay. That being said, all the injuries and inexperience, particularly on the defensive side, will make it tough for the Panthers (3-5) moving forward. — David Newton