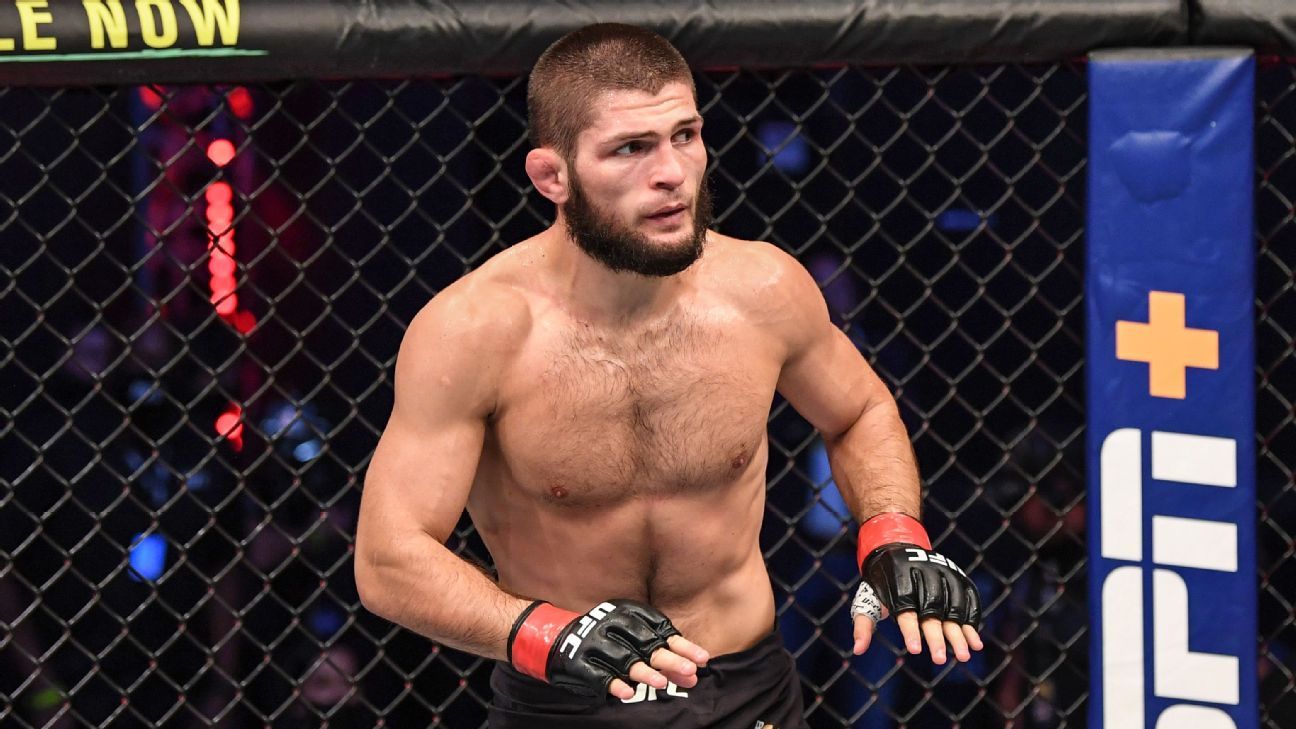 If Adesanya does become champion of a division long ruled by his archnemesis, Jon Jones, would that entice Jones to put his heavyweight pursuit on hold and drop back down to try to reclaim the title he held for nearly a decade? Jones, who hasn’t fought since February, wants to fight for the heavyweight title, but champion Stipe Miocic might not be ready to defend against Francis Ngannou until March. So is Jones willing to wait until possibly next fall to fight again, or would an Adesanya bout be too tempting?

And by the way, White said Adesanya won’t have to vacate the middleweight title to move up. White said he got the feeling No. 1 middleweight contender Robert Whittaker didn’t want a rematch with Adesanya, so the promoter moved on to Blachowicz. Whittaker told ESPN he does want the rematch, but not until March or April because of the arrival of a newborn in January.

White also said on Saturday night that Khabib Nurmagomedov will remain the lightweight champ despite having announced his retirement after beating Justin Gaethje at UFC 254. White has talked to Nurmagomedov, and while White said he doesn’t know for sure, he has a feeling Nurmagomedov will fight one more time and try to retire 30-0. Is it wishful thinking, or is White onto something?

Keeping Nurmagomedov as the champ means the proposed Jan. 23 bout between Conor McGregor and Dustin Poirier won’t be for the title, but if McGregor beats Poirier, it seems certain his next fight would be for the belt. Will 2021 be the year McGregor regains a title?

Real or not: Adesanya’s skill set will be too versatile for Blachowicz, and his power will carry over to light heavyweight

Wagenheim: Adesanya’s skill set is a handful at middleweight and will be no less so at light heavy, because his skill set begins and ends with speed. Speed fuels his elusiveness as well as his attacks. He is too fast for 185-pounders to catch up to, and at 205 he’ll have speed to kill. Of course, if Blachowicz touches Adesanya, it will feel like nothing he has felt before. But that’s asking a lot of Blachowicz, who is a fundamentally strong standup fighter but will have a hard time finding his range against an opponent who at one moment will be right in front of him and in the next instant will be six inches out of his punching range. Until Adesanya reappears and fires back.

Will Adesanya’s power translate? I think it will, because he’s never been one to rely on a one-punch difference-maker. He’s not a classic volume puncher, launching offense at every second. His genius is in being one of the best at hitting while not being hit. And that’s the type of middleweight who is most likely to have success moving up. Especially this middleweight.

When Adesanya and Blachowicz are fighting at distance, it is an Adesanya fight. But what about when they get their hands on each other? It will be interesting to monitor how Adesanya contends with Blachowicz in clinches and grappling. Will the Pole be in control in clinches or if the fight goes to the canvas? I suspect that Adesanya will have an answer. He has been in many a clinch with many a strong man, and his skill set has fared just fine. He has shown an ability to stay on his feet, where he does his best work.

Real or not: If Adesanya beats Blachowicz, expect a title defense against Jones trying to reclaim the light heavyweight belt

Ariel Helwani and Daniel Cormier discuss why now is the time for the UFC to book a megafight between Jon Jones and Israel Adesanya.

Helwani: The answer should be real, but I don’t know what to think when it comes to Jones at the moment. I thought the UFC should have booked Jones vs. Francis Ngannou this summer, and I thought it should have booked Jones vs. Adesanya next, too. Now, I get that if Adesanya wins, him holding Jones’ title going into a Jones fight would make for a juicy storyline, but isn’t Jones getting ready to fight at heavyweight? So when would this Adesanya-Jones fight actually happen? Also, the timing of this “announcement” is a little funny considering it felt like next weekend’s Thiago Santos vs. Glover Teixeira fight was a No. 1 contender fight, right? Well, not anymore.

There’s obviously no denying the fact that Adesanya vs. Blachowicz is the biggest fight they could make for the 205-pound belt right now, if it can’t be Adesanya vs. Jones. I just wish Adesanya-Jones were happening next, because lord knows that’s bigger than any title fight, but we’ll have to wait a little longer for that one, after all.

Real or not: White’s hunch on Khabib returning will prove prophetic

Raimondi: I do, indeed, think Nurmagomedov will fight again. There are too many factors pointing in the affirmative. I’m not saying what Nurmagomedov said after UFC 254 was a lie. I truly think the UFC lightweight champion believed that he would be stepping away, and that he couldn’t go on as a fighter without his father. But on the other hand, Abdulmanap Nurmagomedov’s dream was for his son to go 30-0. Khabib is 29-0 now. The idea of coming back for just one more bout has to be enticing, right? Nurmagomedov is only 32 years old. He hasn’t taken much damage in his career at all. He’s fresh. It makes too much sense.

Like White said Saturday night, Nurmagomedov was emotional after beating Gaethje. He was injured and sick during camp. The weight cut was clearly very difficult. Nurmagomedov surely didn’t even want to think about jumping into training camp again and doing it all over. Finishing Gaethje was the release of a burden, and now he absolutely deserves some time to rest and ponder his future. No one should hold Nurmagomedov to what he said in the moment, adrenaline racing, mind going a mile a minute.

With all that being said, it has to be right for Nurmagomedov to return. The right opponent, the right setting, the right environment, the right timing. I’m not sure I see Nurmagomedov coming back without crowds. I don’t think he comes back for any old foe. I believe there is only one opponent who would truly get Nurmagomedov motivated again: Georges St-Pierre. St-Pierre was an idol, the man Abdulmanap dreamed his son would fight one day. The story of Nurmagomedov going for 30-0 against GSP, one of the greatest ever, would be incredibly rich.

Real or not: McGregor will be the lightweight champ in 2021

Ariel Helwani reports on Conor McGregor accepting a fight vs. Dustin Poirier on Jan. 23, but McGregor has a stipulation that he wants the fight to take place at AT&T Stadium.

Okamoto: This is a tough one to answer at the moment, seeing as how we have an undefeated UFC lightweight champion in Khabib, who just definitively stated he won’t fight again. The UFC’s decision to not vacate the title and move on in this situation surprises me. But let’s remember one thing: The UFC badly, badly wants to book a rematch between Nurmagomedov and McGregor. That’s the fight the UFC wants, and has wanted for a long time. Perhaps the play here is to keep Nurmagomedov in the game, the topic of conversation, as much as possible, and hope McGregor beats Poirier on Jan. 23 and then talks Nurmagomedov into coming back for one more.

I don’t think Nurmagomedov feels there’s any unfinished business with McGregor, at least when it comes to competing in the Octagon, but if McGregor were to look great against a legitimate opponent in Poirier, and then cut a fantastic promo for a title fight against Nurmagomedov … is it possible Nurmagomedov would come back? I’ll be honest, I hope so. And the UFC hopes so, too. It’s worth it to the UFC right now to keep Nurmagomedov the champion and at least keep the door open for him to fight again. To answer the question, I’ll say not real, too many variables at play. But it’s certainly possible, and regardless, lightweight is going to be very, very fun in 2021.