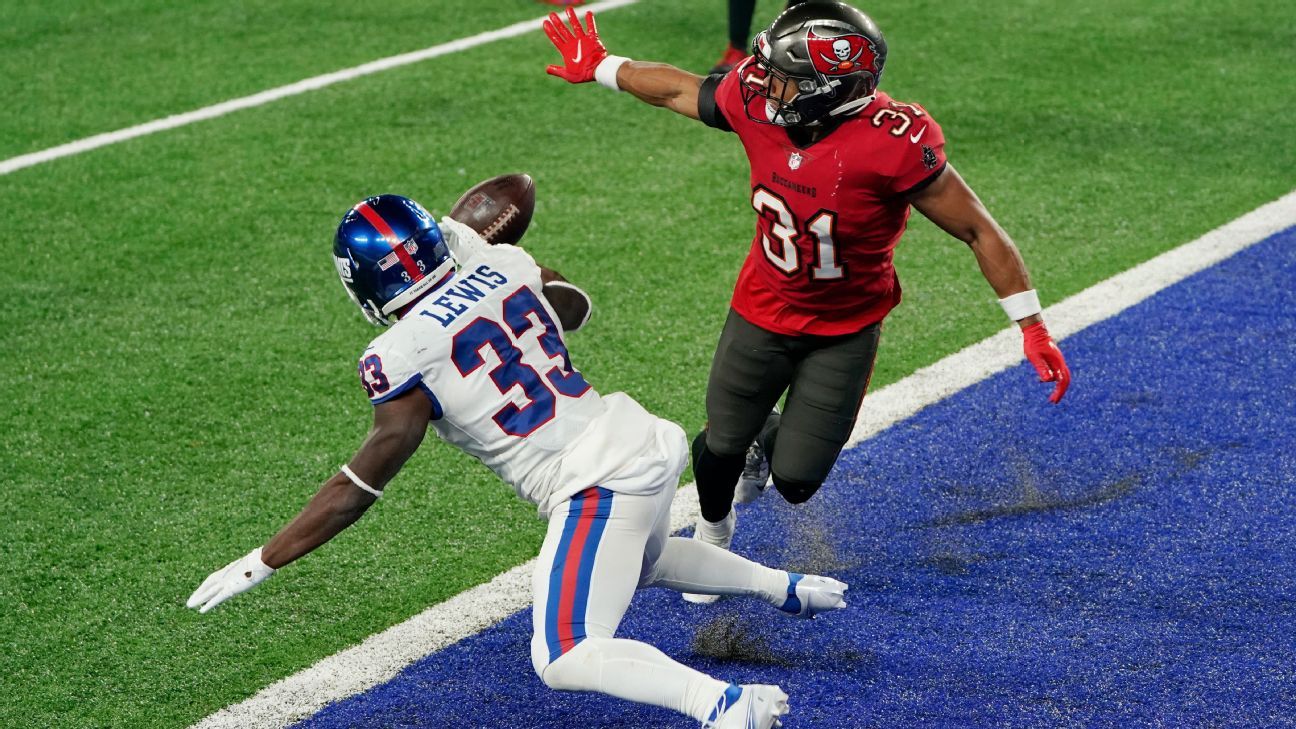 EAST RUTHERFORD, N.J. — A picked-up penalty flag in the final minute allowed the Tampa Bay Buccaneers to edge out the New York Giants 25-23 on Monday night at MetLife Stadium.

Tampa Bay safety Antoine Winfield Jr. was originally flagged on a 2-point conversion attempt with 28 seconds remaining that would have tied the game. Winfield collided with Giants running back Dion Lewis just inside the end zone near the right sideline either simultaneously with the ball or perhaps a millisecond early, depending on one’s viewpoint. The ball fell incomplete.

The Buccaneers (6-2) celebrated after the officials gathered and decided to pick up the flag. They thought it was a clean play.

They weren’t about to complain about the officials’ change of heart.

It still was a controversial ending to a wild game. It’s not every day that one official overrules another on such a crucial play. But that’s what happened in this instance.

“The side judge [Eugene Hall] had the flag thrown on the play and came to the down judge [Jerod Phillips] who was on that side of the goal line,” referee Brad Rogers said. “The communication between the side judge and the down judge was that the defender contacted the receiver simultaneously as the ball came in. And in order to have defensive pass interference, it has to be clearly early and hinder the receiver’s ability to make the catch.”

The officials thought it was clear enough to pick up the flag.

“You want to make sure that it meets the qualifications for pass interference,” Rogers said. “And in our communication on the field, the down judge and the side judge communicated about the action and believed that it was appropriate to pick that flag up.”

It certainly surprised the Giants. Judge could be seen yelling at the officials after the game.

Quarterback Daniel Jones said he thought he was going to have another opportunity to force a tie that likely would have sent the game into overtime. Instead, the Giants (1-7) lost another heartbreaker in which Jones’ turnovers proved costly.

“I thought it was pass interference,” Jones said. “I was surprised when they picked it up. We’ll watch it and learn from it, I guess. See what they saw, but tough break.

“I was certainly surprised. You don’t see that often. I was surprised.”

But it all seems to be a matter of perspective, or in this instance, team affiliation.

“The refs,” Bucs linebacker Lavonte David said, “did the right thing in my opinion and picked up the flag.”