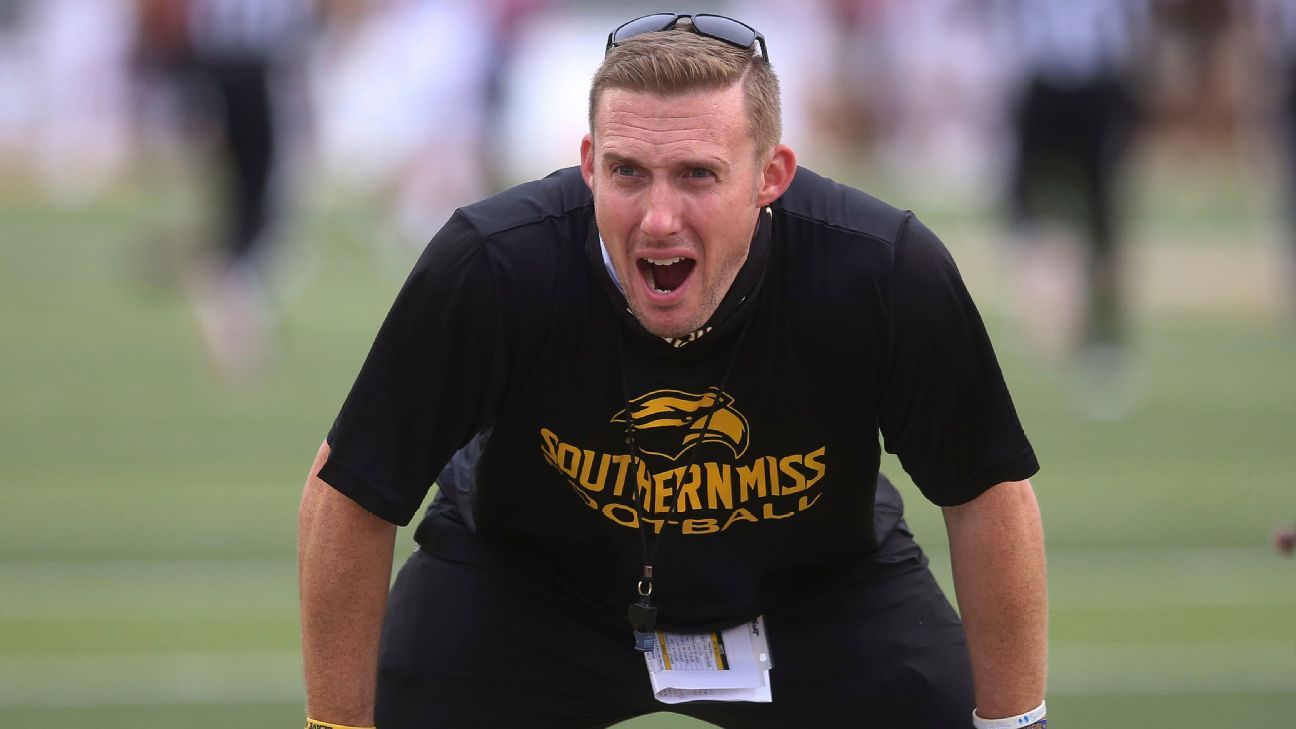 Scotty Walden knew he had to make the call, but he was dreading it.

The night before couldn’t have gone much better. Walden, the 30-year-old interim head football coach at Southern Miss, had traveled from Hattiesburg, Miss., to New Orleans to interview for the Austin Peay head-coaching job, a permanent gig. Walden and Austin Peay athletic director Gerald Harrison had talked previously over Zoom, but didn’t meet in person until Oct. 19 at the Marriott hotel adjacent to the New Orleans convention center.

“Gerald and I hit it off,” Walden said. “It felt like it flowed. It felt right.”

But something wasn’t right, at least not the next morning. Around 10 o’clock, Walden received a call in his office from Southern Miss head athletic trainer Todd McCall.

“I thought you sounded a little sniffly,” said McCall, who proceeded to break the news.

Walden had tested positive for COVID-19. Admittedly stunned, Walden called his agent, Thayer Evans, and then prepared, as best he could, to call Harrison.

“I was thinking, ‘Does that disqualify me for the job if I give the AD coronavirus?’ ” Walden said. “I was a little nervous about that conversation. I felt horrible, but you know how this deal is. You can’t really control it.”

The remorse and sincerity in Walden’s voice told Harrison everything he already knew about the guy he wanted to hire. Austin Peay on Monday is set to introduce Walden as its head football coach, an announcement delayed because both the new coach and his boss had to quarantine.

Welcome to the college football coaching carousel in 2020.

“At some point, we’ll all look back on this and laugh and say, ‘It’s unbelievable what we were able to do under such strange circumstances,'” Austin Peay interim president Dannelle Whiteside said.

After interviewing Walden in New Orleans, Harrison caught the first flight out to Nashville, Tennessee, and then drove an hour to Austin Peay’s campus in Clarksville. He was talking with Whiteside when Walden called, and then called him back.

“I did say a few four-letter words, not to him, but in my head, when he told me that he had tested positive,” Harrison said.

After hanging up with Walden, Harrison then made the call he was dreading. Taking some time to calm down, Harrison phoned his wife, Lisa, to let her know that he had been exposed.

During the next few days, both Harrison and Walden stayed at their respective homes, away from their families. Walden’s 7-month-old son, Luca, would roll his walker to the door and stare at his dad, who couldn’t pick him up. Walden’s wife, Callie, and Luca never contracted the virus.

Harrison’s test also came back negative, as he isolated himself away from his wife and two daughters, 14-year-old Torri and 13-year-old Lorri.

But even if his test had come back positive, Harrison knew he had found his head coach. On Oct. 22, Harrison offered Walden the job, this time via FaceTime — and Walden accepted. Austin Peay had hired another team’s interim head coach recently diagnosed with COVID-19 during a global pandemic.

“I told Scotty we would always be linked, the first interview and the first hire in COVID-19 and the first coach testing positive getting a job,” said Harrison, who has since had a second negative test. “But we got the right guy.”

There have been a few firsts for Austin Peay during a college football season unlike any other. The Governors, who will play the bulk of their games in the spring as members of the Ohio Valley Conference, appeared in the first college game of the pandemic back on Aug. 30, when they lost to Central Arkansas 24-17 in Montgomery, Alabama. (Members of the OVC were allowed to play nonconference games this fall.)

Now they’re the first to hire a coach during that same pandemic.

“The sheer way it went down and the timing of it all is just incredible,” Walden said.

The resignation of Austin Peay coach Mark Hudspeth on July 3 — Hudspeth was serving a suspension for conduct issues at the time — put Harrison in a bind. The OVC’s Aug. 14 postponement of the fall football season added another layer of uncertainty. Harrison named Marquase Lovings as Austin Peay’s interim head coach for the three-game fall slate.

But he soon realized a full-scale search would be needed.

“We knew it was going to be a pretty quick timeline,” said Drew Turner, vice president at Collegiate Sports Associates, which assisted Harrison with the coaching search. “Doing it remotely in a pandemic when most of the candidates were in the middle of their seasons was certainly unique.”

Harrison conducted some of his initial meetings with candidates via Zoom. But he felt he needed to see the finalists in person, while understanding the risks associated with flying, hotels and traveling amid a pandemic.

There was no time to wait, either. The Governors’ spring season is scheduled to start Feb. 21 against Tennessee Tech. Their three games this fall were all losses, to Central Arkansas, Pittsburgh and Cincinnati. Practice for the 2021 spring season begins in January.

“I thought about doing everything on Zoom, but it was too important not to be able to sit down and talk to the people I really wanted to see,” said Harrison, whose meeting with Walden was the last one with the five finalists.

Evans had first mentioned Walden to Turner in July, drawing parallels with another young coach, Will Healy, who at age 30 in 2015 took over an Austin Peay program that had one victory in the previous three seasons. Austin Peay ended a 29-game losing streak in 2017 and went on to finish 8-4 under Healy that fall.

Walden, who in 2016 became the youngest head coach in the NCAA when he took over at Division III East Texas Baptist at age 26, soon moved to the top of Harrison’s list. A Southern Miss assistant since 2017, he was named the team’s interim head coach Sept. 7, following Jay Hopson’s departure. Although Southern Miss could have considered Walden for its permanent job — Walden thinks he would have gotten a “legit interview” — Austin Peay offered security and more.

“There’s two sides to it,” Walden said. “This is not just a job I look at, like, ‘I need a job during the pandemic.’ This is a phenomenal job and a phenomenal opportunity. I’m blessed that I get to start my Division I head-coaching career at a place like Austin Peay, as opposed to a place that has been a losing program for a long time. … When you look at the other side of the coin, Southern Miss, phenomenal place, a place we love. But it wasn’t a guarantee.”

Turner got great reports from both Walden and Harrison after the face-to-face in New Orleans. Then Evans called.

“We’re thinking we’re about ready to land the plane,” Turner said. “I tell my wife when we do these searches, ‘There is always turbulence.’ When something’s going too smooth, you’re just waiting for a curveball. … Gerald was happy with the process, we were moving along with the timeline and then we get the call that there’s COVID. I walked out of my office and looked at my wife and said, ‘Well, there’s our turbulence.'”

Walden met with Whiteside over Zoom the night he received his COVID-19 diagnosis (Walden made sure none of his communication with Austin Peay conflicted with his Southern Miss duties). Whiteside, who has a 2-year-old child, bonded with Walden and his wife about the challenges of getting toddlers to sleep. As young leaders in their 30s, Whiteside and Walden “found that we have a lot in common,” Whiteside said. She signed off on Harrison’s choice.

While Harrison obviously couldn’t offer the job to Walden in person, the second-year Austin Peay athletic director did get creative in extending the offer virtually.

Walden, renowned for his offensive creativity, was impressed, too.

“I was hoping it was good news, and then he calls his 14-year-old daughter, Torri, into the room where he was and says, ‘Torri, you got something to ask Coach Walden?’ ” Walden said. “And she says, ‘Are you ready to be the next head football coach of Austin Peay University?’

“I was fired up and was like, ‘You know I can’t say no to your daughter.’ That was awesome. I love the way she did it. We had a great laugh about it, and it was a really cool time.”

Harrison’s first day out of quarantine was Friday, when he flew by private jet to pick up Walden and his family and bring them to Clarksville.

“I’ve been stuck in the house [quarantining] since I met with him, and my first day out of the house was going to pick him up,” Harrison said.

The two laugh about it now — “One time, he called and said, ‘Is this that dude that put me in quarantine?'” Walden recalled — but it’s been a stark reminder of the unpredictability of 2020.

“It’s been a lesson … for all of us,” Harrison said. “You learn to plan for everything when you get into this business, but there’s no planning for this.”