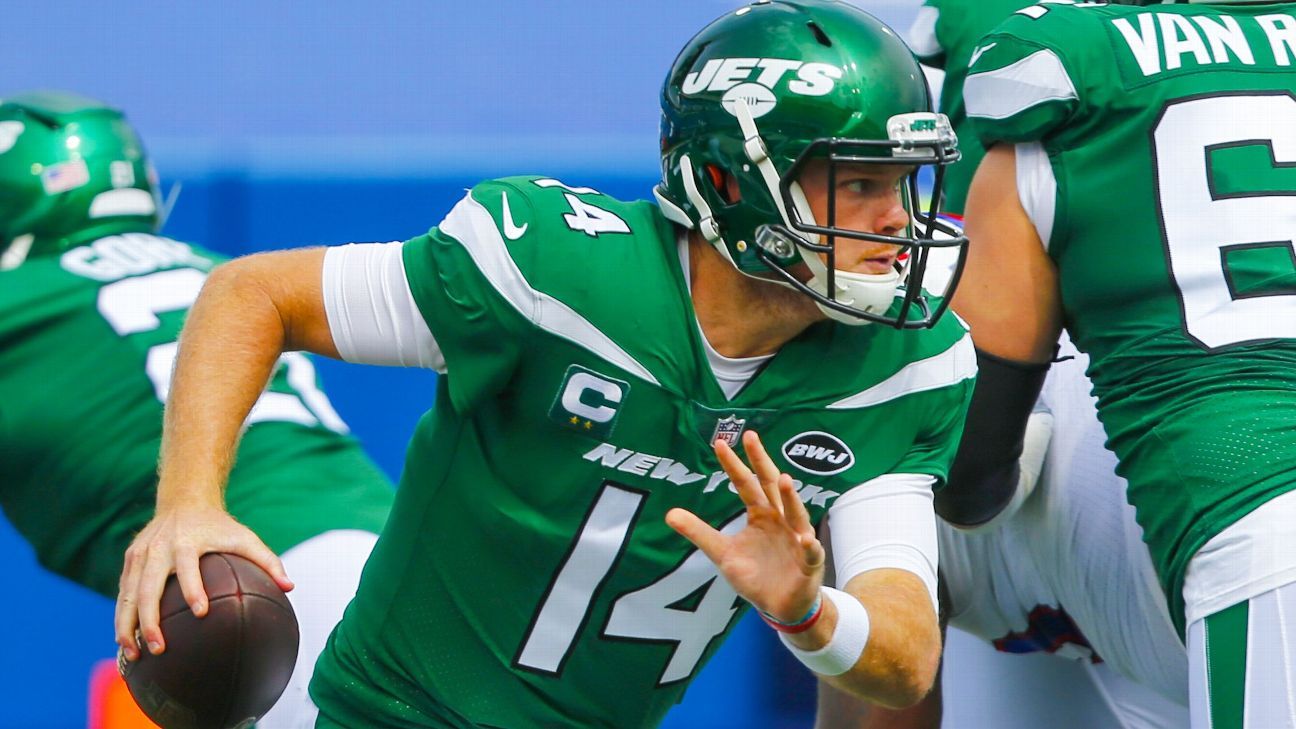 The NFL trade deadline — 4 p.m. ET on Tuesday, Nov. 3 — is approaching, and teams have been making moves for the last few months.

A few 2021 NFL draft picks were dealt, and the Jacksonville Jaguars were busy, including trading pass-rusher Yannick Ngakoue to the Minnesota Vikings. Elsewhere, the Las Vegas Raiders moved on from a rookie third-round pick before he had even played a game.

What’s in store leading up to deadline day? We’re tracking every deal since training camp here, with analysis, rumors and highlights from our team of NFL reporters (latest info on top):

The New York Jets dealt seldom-used outside linebacker Jordan Willis to the San Francisco 49ers. The Jets will receive the 49ers’ 6th-round 2022 pick in exchange for Willis and a 7th-round 2021 pick. Willis was inactive for the last three games. He played only 42 snaps and had no tackles.

Shortly after falling to 0-6, the New York Jets finalized a trade that sends starting nose tackle Steve McLendon — a captain — to the Tampa Bay Buccaneers, The Jets will receive a 2022 sixth-round draft pick in exchange for McLendon and a 2023 seventh-round pick. The Bucs had a need for a veteran replacement for 347-pound nose tackle Vita Vea, who suffered a broken ankle last week and is done of the season.

Let’s run through the players who might become available in the three weeks between now and the Nov. 3 NFL trade deadline and propose a few deals. Some might pop up only if their team craters or if another team gets desperate. Others are guys who might be more available than you think because they don’t have much of a future with the franchise.

The Tennessee Titans traded outside linebacker Kamalei Correa and a 2021 seventh-round draft pick to the Jacksonville Jaguars for a 2021 sixth-round pick. Correa was frustrated with his diminished role after he played only 38 snaps on defense (14%) and 23 special-teams snaps in three games.

A handful of NFL executives surveyed this week told ESPN they believe the New York Jets would receive similar compensation in a trade for Sam Darnold if they finish with the No. 1 overall pick and decide that’s the route they want to pursue. “I don’t think they’d get a [first-round pick] for Sam, but it also depends what he puts on tape the rest of the year,” one general manager told ESPN. “The problem is, [Darnold] is struggling with his accuracy, his durability — so they’re in a tough spot. And if everyone knows the Jets are taking a quarterback, then they won’t get as much back.”

Adam Schefter breaks down what we could expect to see from the Jets if they land the No. 1 overall draft pick and what that would mean for Sam Darnold.

Even before Odell Beckham Jr. shined during a Thursday night win over the Cincinnati Bengals, one source close to the situation insisted to ESPN that the Cleveland Browns had no plans or discussions this season about trading the wide receiver. “It’s totally not true,” one source told ESPN, regarding speculation that Beckham could be traded. “No idea where anyone would have gotten that.”

Allen Robinson‘s contract situation is a tricky one, and not just for the usual reasons. The Chicago Bears‘ No. 1 wide receiver was in the news because he’s frustrated with the state of contract negotiations with the team. Robinson is in the final year of the three-year, $42 million free-agent deal he signed with Chicago in 2018. As is often the case, he wants to stay, the team wants to keep him, but the sides just haven’t been able to agree on the appropriate numbers.

The Miami Dolphins acquired rookie offensive weapon Lynn Bowden Jr. from the Las Vegas Raiders for a Day 3 pick swap. The Raiders received a fourth-round pick from Miami while sending back a sixth-round selection. Bowden, a third-round pick out of Kentucky who primarily played running back in training camp for the Raiders, might get a shot to play receiver in Miami. He was thought of as a versatile playmaker, potential slot receiver and returner coming out of the draft. Bowden played quarterback, slot receiver and running back in college.

The Denver Broncos traded cornerback Isaac Yiadom to the New York Giants for a seventh-round pick in 2021. Yiadom, a third-round pick in 2018, gives the Giants another option at corner. “I’ll be his biggest cheerleader,” Denver coach Vic Fangio said after the deal was completed.” I hope he makes us look bad and he’s a great player there.”

The Jacksonville Jaguars continued their roster purge by agreeing to trade safety Ronnie Harrison to the Cleveland Browns for a 2021 fifth-round draft pick. The Browns were in need of a safety following the season-ending injury to second-round draft pick Grant Delpit, who ruptured an Achilles tendon in training camp on Aug. 24. Harrison has started 22 of the 28 games in which he played for the Jaguars since they drafted him in the third round out of Alabama in 2018.

The Jacksonville Jaguars traded pass-rusher Yannick Ngakoue to the Minnesota Vikings for a 2021 second-round draft pick and a conditional 2022 fifth-round draft pick. Ngakoue agreed to a one-year, $12 million deal with the Vikings — instead of his franchise tender of $17.8 million — to complete the trade. Ngakoue, 25, gives the Vikings a young, proven pass-rusher opposite Danielle Hunter, one whose work ethic and intensity have always been among the most respected in Jacksonville’s locker room.

The Carolina Panthers traded linebacker Andre Smith to the Buffalo Bills in exchange for a conditional draft pick in 2023. The Panthers had planned to release Smith.

The Miami Dolphins traded linebacker Raekwon McMillan and a 2021 fifth-round draft pick to the Las Vegas Raiders for a 2021 fourth-round draft pick. The net gain for the Dolphins was a Day 3 pick swap while the Raiders got a run-stuffing linebacker who can compete for playing time in a position group in which they need some depth.

The Detroit Lions traded cornerback Michael Jackson to the New England Patriots, hours after announcing plans to release the veteran. In return, the Lions receive a conditional 2022 seventh-round pick in the NFL draft, a source told ESPN’s Mike Reiss. Jackson played in one game for Detroit last season, a 19-16 loss at Washington, where he played two special-teams snaps.