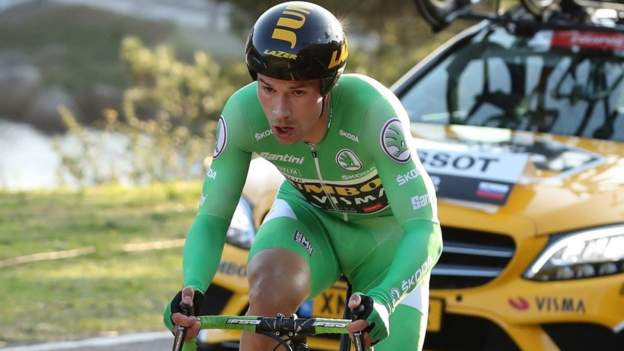 Primoz Roglic placed himself in pole position to retain his Vuelta a Espana title with a sensational time trial display as Briton Hugh Carthy impressed to stay in contention.

Carthy ate away at the 32-second gap to Carapaz during the 33.7km stage.

He stays third overall but is now only eight seconds behind the Ecuadorian.

Five stages remain, with the riders now set for a hilly stage 14 covering 204.7km between the Galician city of Lugo and Ourense, which the Vuelta last visited in 1960.

Slovenian Roglic will be a strong favourite for the title although he was philosophical about his chances.

“Today went quite fine. We know it’s not a fun thing to do the time trial, but I had the legs. I’d rather be 39 seconds ahead than behind, but we need to keep our focus.”

Roglic was fancied to do well in Tuesday’s time trial and slowly began chipping away at Carapaz’s advantage after he set off from Muros.

It was a smooth change from his time trial bike to a more traditional road bike before the final ascent up Mirador de Ezaro, which he coped with better than Carapaz.

The Slovenian clinched the stage from American Will Barta of the CCC team.

Carthy, who won stage 12, had cut the deficit to the leading pair during the first half of the race, but could not match Roglic in the closing kilometres.