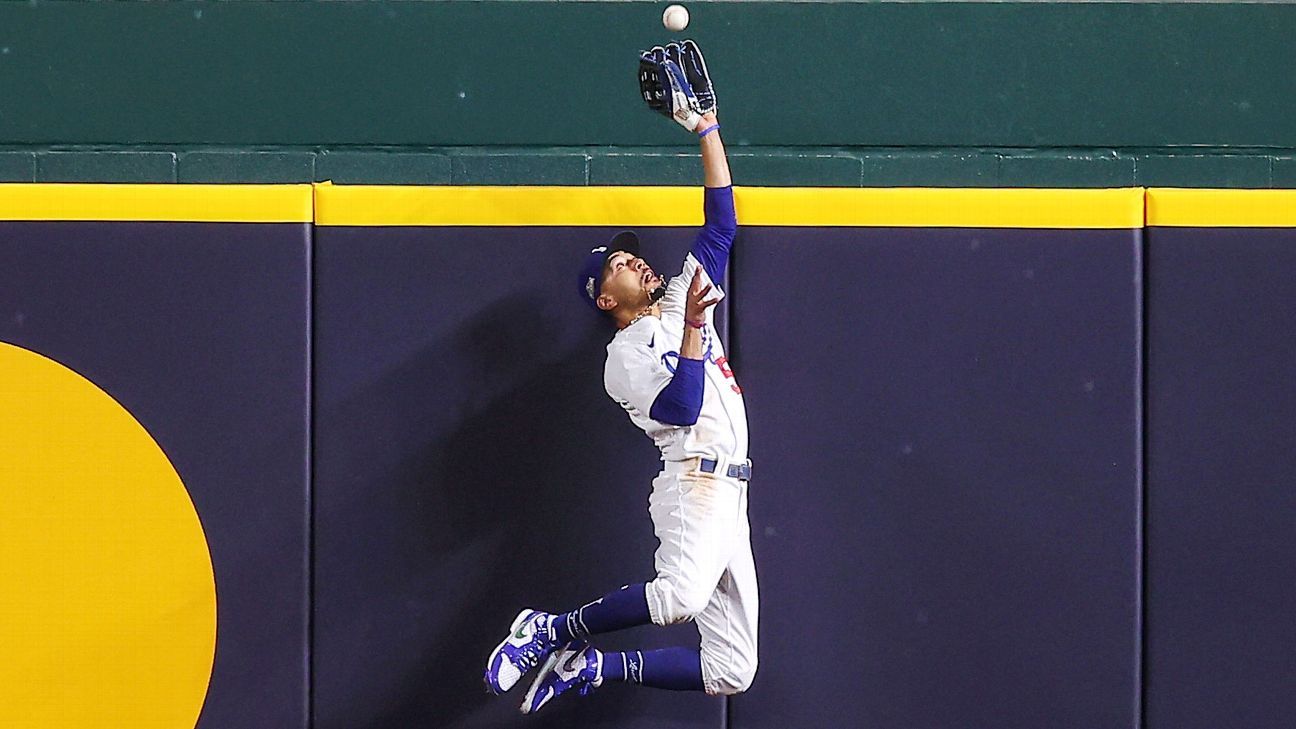 After watching Mookie Betts make spectacular play after spectacular play in the postseason — including two home run robberies and a key catch of a sinking liner in Game 5 of the NLCS — it should come as no surprise that Betts is the National League Gold Glove winner for right field. In his first season with the Los Angeles Dodgers, Betts claimed his fifth consecutive Gold Glove after winning four with the Boston Red Sox

While postseason play doesn’t factor into the awards, Betts’ catch of Dansby Swanson’s line drive in the third inning may have saved the game — and the Dodgers’ season. The Braves, already up 3-1 in the series, led 2-0 with runners at second and third and one out when Betts made his grab, with Marcell Ozuna then ruled out for leaving third base early. The catch kept the game close, which the Dodgers rallied to win 7-3.

“Unbelievable play by an unbelievable player in a big moment,” teammate Corey Seager after that game. “That is what you need to win baseball games this time in the year.”

Betts ranked tied for third among all players with 11 defensive runs saved, trailing only Nolan Arenado’s 15 and Joey Gallo’s 12 and tied with Byron Buxton. Arenado won his eighth consecutive Gold Glove at third base — matching all eight seasons he’s played in the majors. Gallo is known for his prodigious home runs, but he earned his first Gold Glove after moving to right field on a full-time basis for the first time in his career.

This year’s Gold Gloves were based solely on a collection of defensive metrics known as the SABR Defensive Index, which combines several methods of estimating defensive performance statistically. Due to MLB’s regional schedule this season, managers and coaches, usually one part of the final component, did not vote.

In the National league, Cubs first baseman Anthony Rizzo (fourth overall) and second baseman Kolten Wong of the Cardinals (second overall). The Cardinals surprisingly did not pick up Wong’s $12.5 million team option for 2021, so he takes his Gold Glove award into free agency. Reds catcher Tucker Barnhart also won his second Gold Glove after winning in 2017.

In the American League, Indians catcher Roberto Perez won his second straight while Royals left fielder Alex Gordon won his fourth in a row and eighth of his career. Gordon, who announced his retirement, becomes the sixth player to win a Gold Glove in his final season (joining pitchers Greg Maddux, Mike Mussina and Bobby Shantz; outfielder Roberto Clemente; and first baseman Wes Parker). Gordon finishes his career as one of the greatest defensive left fielders of all time. Based on Total Zone Fielding Runs, an estimated defensive measurement that goes back to 1953, Gordon trails only Barry Bonds and Carl Yastrzemski in career runs saved.

White Sox center fielder Luis Robert beat out Buxton and Mariners first baseman Evan White edged out two-time winner Matt Olson, with the pair becoming the first rookie winners since Arenado in 2013. Cubs shortstop Javier Baez, known for his fielding wizardry, struggled at the plate in 2020 but finally won his first Gold Glove, beating out Swanson, who led all shortstop in DRS.