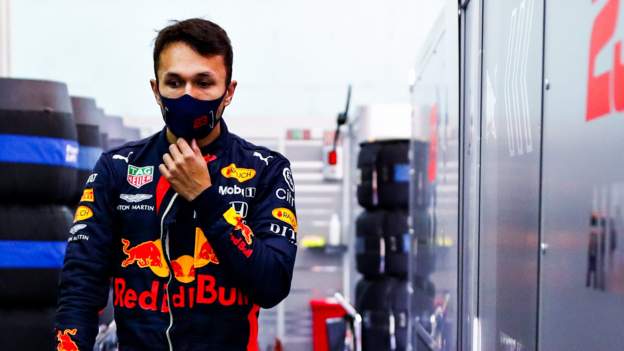 Former F1 driver Jolyon Palmer, who left Renault during the 2017 season, is part of the BBC team and offers insight and analysis from the point of view of the competitors.

Life looks to be getting tougher for Red Bull’s Alex Albon with every passing race.

There have been questions about his seat at the team since the early part of the season, when he failed to narrow the typical half-a-second pace deficit of 2019 between him and team-mate Max Verstappen. For much of this year, he has been stuck in a packed midfield rather than offering Verstappen support in his personal battle with the two Mercedes cars.

Albon managed to pick up a first podium in Mugello a couple of months ago, after a gutsy overtake on Daniel Ricciardo’s Renault in the closing stages, and there was hope within the Red Bull camp that he could find some more form and confidence from that moving forward.

Sadly that hasn’t transpired, and the British-Thai driver has picked up only one point from the subsequent four races, and no points in the past three, culminating in a costly spin in the closing stages in Imola last weekend.

It’s very tough for Albon, who is pitched against one of Formula 1’s outright fastest drivers – possibly the fastest over one lap.

Just look at how Verstappen has compared when partnered with Pierre Gasly, who is rejuvenated following his demotion to Alpha Tauri, and Ricciardo, who has also come alive once more at Renault.

What has happened to Albon?

Albon was promoted to Red Bull in a hurried move in the middle of last season, his debut year in F1, which he started for Red Bull’s second team.

He was swapped with Gasly, who at the time was in exactly the situation Albon is now.

When Albon was moved up, he looked a promising rookie alongside Daniil Kvyat in the second team – then known as Toro Rosso – but didn’t really have the results to justify a move to one of F1’s most competitive teams.

It felt a bit of a rash move from Red Bull to switch him with the struggling Gasly last summer. They have always been pretty punchy with their young drivers, and not afraid of mid-season switches, but putting a rookie alongside Verstappen was always going to be a tricky ask.

Albon’s initial races looked promising, and his race-craft, particularly, was lauded following a debut drive from the back to fifth in Belgium last year.

The problem is that since then, with one exception in Japan last year, he hasn’t been able to close the gap to Verstappen at all in qualifying.

And now the chasing pack have closed in on the leaders from their 2019 positions, Albon doesn’t have the luxury of being adrift of Verstappen but still slotting in ahead of the close midfield fight. He is well and truly in it, as his ninth place in the drivers’ standings shows.

The pressure was increased a couple of weeks ago by the Red Bull bosses, and since then Albon seems to have struggled even more, with a lacklustre drive outside of the top 10 in Portugal before his Imola spin.

Red Bull say they want Albon to find some more performance and earn a place in the team for next year, and justify their decision to plunge him in at the deep end. But Albon is not giving them that opportunity at the moment, and his future in the team hangs by a thread.

Why won’t they go for Gasly?

In normal circumstances, the obvious replacement for Albon would have been Gasly.

In the past, Red Bull’s second team has existed to blood drivers for the main set-up. And Gasly has been putting in stunning performances of late.

But Gasly’s poor spell with the senior Red Bull team has left a bad taste with the bosses, and they clearly don’t trust he would mirror his strong 2020 form if he was re-promoted.

Therefore, it was announced before Imola that Gasly would be staying put for 2020.

Should they pick Perez or Hulkenberg?

The other obvious options on the open market for Red Bull are Sergio Perez and Nico Hulkenberg – two established, solid performers who are both looking for a seat next season and would jump at the chance to drive race-winning machinery.

Taking either would be a big move, though – the first time Red Bull have taken a driver from outside of their young driver program since their inception in 2005, when they began life with David Coulthard and Mark Webber.

Perez seems to be more heavily linked to the drive than Hulkenberg, should Red Bull opt to drop Albon, and I think he would be a solid signing.

Every weekend right now, Perez is fighting for best of the rest with Racing Point, and has put in some really strong drives, recovering from tricky positions.

In Portugal, he qualified fourth but was hit by Verstappen on the opening lap, spinning to the back of the field, before a fine recovery drive to seventh, which was only two laps away from being fifth.

In Imola, he didn’t make the top 10 in qualifying, but recovered with exceptional race pace in a long first stint, and should have had a podium had Racing Point not sacrificed the position by pitting him for fresh tyres under the late safety car.

Perez can be anonymous some weekends, but then he can produce these fine drives that come out of nowhere, to be best of the rest or even snatch a podium, which he has done so many times in midfield machinery.

He’s a master of looking after tyres, a crucial skill that can give a team the chance to do something different on strategy, and Racing Point are currently able to take advantage of that.

Hulkenberg has also reminded the F1 world of his talents this season with three performances for Racing Point as a super sub.

Having been team-mates with him at Renault in 2017, I know how fast he can be, and he demonstrated this when he stood in for Perez at Silverstone when the Mexican contracted coronavirus, qualifying a spectacular third in only his second weekend in the car.

Then, when Perez’s team-mate Lance Stroll also had to miss a race with Covid-19, Hulkenberg managed to fight from the back of the grid up to eighth and earn the team four points.

In deciding whether to switch Albon for either of these two drivers, Red Bull bosses must weigh up whether that will produce an improvement, something that comes down to the skill of Verstappen.

Verstappen is phenomenally quick. In the entire field, I’d say potentially only Lewis Hamilton and possibly Ferrari’s Charles Leclerc could be a match for him over one lap.

The question, then, is whether Perez or Hulkenberg would be any closer than Albon, or indeed Gasly was at the start of 2019, or would still be adrift of this qualifying superstar.

If Red Bull believe that Albon is at a similar level to the other midfielders in terms of driving, and that he has the same machinery as Verstappen, you have to wonder if the Dutchman could still be nibbling at the heels of the Mercedes were he driving a Racing Point, a Renault, McLaren or even an Alpha Tauri. It seems implausible, but there is no concrete answer.

What of Albon if he is dropped?

Were Red Bull to take a replacement for Albon, it would be a shame for him not to be afforded the same second chance as Gasly and Kvyat – back at Alpha Tauri, the team with which he shone in the first place to earn promotion.

Gasly has transformed as a driver since returning to the B team, and there’s every reason to believe that Albon could do the same.

There is growing momentum for their junior driver, Yuki Tsunoda, who is third in Formula 2 with two races to go, to partner Gasly at Alpha Tauri in 2021, and the Japanese youngster will gets his first chance with F1 machinery at Imola this week.

Tsunoda looks a solid future talent with a couple of F2 wins under his belt in his rookie year, but as yet he hasn’t shown world-beating talent in the way Leclerc, Verstappen or Hamilton did as they emerged.

A sensible move could be to keep Tsunoda in Formula 2 for a title challenge in 2021, and were he to progress as expected, partner him alongside the winner of a 2020 Gasly-Albon duel at Alpha Tauri, rather than rush him through the system in a similar way to Albon.

That would require an element of patience from Red Bull management, though, which so far we are yet to see.