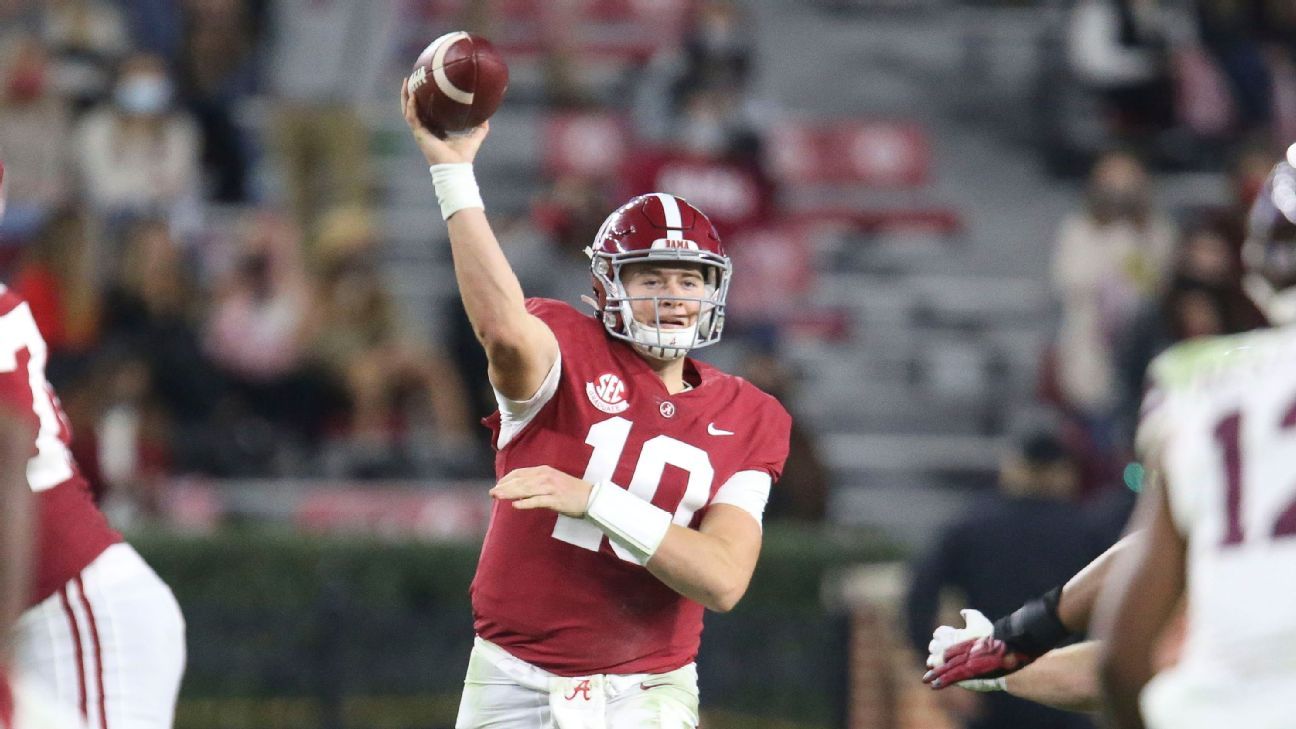 Welcome back to our weekly Heisman Watch for the 2020 college football season. Throughout the season, ESPN.com writers will vote on their top Heisman Trophy candidates.

Notable: Jones continued to pace Bama’s offense in another blowout victory, this time tossing for 291 yards and four touchdowns. Alabama’s offense has scored at least 38 points in every game this season, and Jones has accounted for 17 TDs (16 passing) through six games.

Quotable: “What has impressed me most is his ability and willingness to throw down the field — he’s not dinking and dunking. The 6-foot-3, 214-pound signal-caller is taking shots with accuracy.” — Mel Kiper Jr.

Notable: Lawrence, the clear front-runner before this week, missed last weekend’s game and will miss this Saturday’s game because of his positive test for COVID-19. In six games, Lawrence has 17 passing TDs and just two interceptions, with four rushing scores.

Quotable: “He’ll be in every meeting, we can Zoom him into practice, so he can stay engaged and make his comments and things like that to support those guys, and participate in traveling with us as well,” Clemson coach Dabo Swinney said.

Notable: Fields has played in only two games, but he continues to show why he was near the top of the Heisman list before Ohio State even played this season. Against Penn State on Saturday, he threw for four touchdowns and 318 yards.

Quotable: “Another 300-yard game and four more touchdown passes. Better news for Ohio State, though: The ground game looked terrific without having to rely on Fields as a runner.” — David M. Hale

Notable: Etienne continues to set records for the Tigers. In the first quarter of Saturday’s comeback win over Boston College, Etienne’s TD meant he has scored a touchdown in 42 games, setting an FBS record. Then in the third quarter, he set the ACC career rushing record.

Quotable: “There’s been some great, great running backs come through Clemson, and also through this league,” Swinney said. “That is an incredible record. I’m just proud of Travis and just his total development. He’s such a complete player now and he was a one-dimensional player when he first got here, and now he’s a Swiss Army knife. He can do it all.”

Zach Wilson throws for three touchdowns and runs for a fourth in BYU’s 41-10 win vs. Western Kentucky.

Notable: Wilson continues to rack up huge numbers for the undefeated Cougars. In a blowout victory over Western Kentucky on Saturday, the BYU QB threw for three touchdowns and rushed for another, completing 18 of 32 passes for 224 yards.

Quotable: “Quarterback Zach Wilson was solid, if unspectacular, against Western Kentucky, and a standout performance against the Broncos on the blue turf could boost his case at getting named a Heisman Trophy finalist.” — Chris Low

Notable: While Harris didn’t find the end zone Saturday, he still had 21 carries for 119 yards in Bama’s 41-0 win over Mississippi State. Oh, and he added six catches for 36 yards.

Quotable: “He can be a first-round back. Harris can run well between the tackles or bounce it outside; he has great patience to find his hole. He has improved as a receiver. And he can make tough yards on his own.” — Mel Kiper Jr.