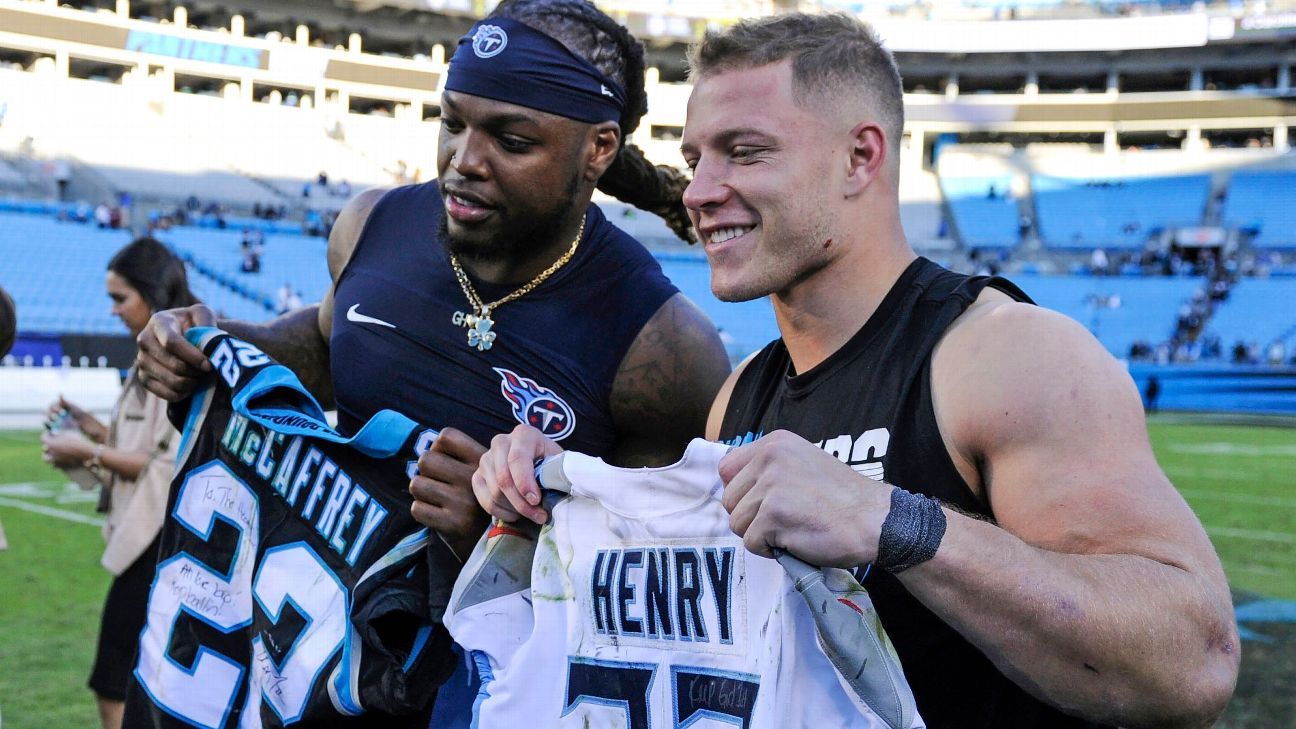 As the final seconds of the Kansas City Chiefs vs. New England Patriots Week 4 matchup ticked away, Chiefs quarterback Patrick Mahomes took a knee to solidify a 26-10 victory.

When he stood up, a handful of Patriots headed his way, eager to acknowledge the reigning Super Bowl MVP as well as show their respect.

After quickly clasping hands with defensive lineman Byron Cowart, then linebacker Anfernee Jennings, Mahomes turned and faced cornerback Stephon Gilmore, who was waiting his turn. As Mahomes leaned his right shoulder toward Gilmore’s chest, the two players did the unthinkable.

Once a normal postgame ritual, hugging during the coronavirus pandemic has been eschewed. Gilmore later tested positive for COVID-19 and Mahomes, despite the contact, did not contract the virus.

The postgame personal contact isn’t the only casualty in the war against COVID-19. The NFL has stopped another beloved player tradition: the swapping of jerseys in person after the game.

The NFL announced in July the trading of jerseys among players would be forbidden in 2020, and players were quick to respond.

San Francisco 49ers cornerback Richard Sherman quipped on Twitter (with multiple LOL emojis): “This is a perfect example of the NFL thinking in a nutshell. Players can go engage in a full contact game and do it safely. However, it is deemed unsafe for them to exchange jerseys after said game.”

“It’s silly,” Houston Texans quarterback Deshaun Watson said when he learned the league was prohibiting jersey swapping. “You’re saying we can play 60 minutes or more tackling each other, then after the game, we can’t go switch jerseys? It doesn’t make sense.”

After more pushback from players, the league came up with a compromise. Days before the 2020 NFL season kicked off in September, the rule was amended so that players could swap jerseys, but it must be done through the teams’ equipment managers. The jerseys belonging to the players who are wanting to swap will be washed and then shipped in the mail.

“It’s a dope opportunity to still be able to [jersey swap],” said Las Vegas Raiders running back Josh Jacobs, who told his equipment manager, Bob Romanski, that he wanted to swap jerseys with Buffalo Bills wide receiver Stefon Diggs prior to their Week 4 matchup.

The Bills’ defense held Jacobs to 48 rushing yards on 15 carries, his lowest total of the season through eight weeks, but receiving a delivered jersey in the mail a few days later might have helped Jacobs temporarily forget about the 30-23 loss to Buffalo.

“It’s honestly like a trophy when you get their jersey,” Jacobs said. “When it arrives, it’s presented to you in a box. It’s like Christmas almost.”

Like the brief high-fives or fist bumps Patriots players snagged from Mahomes after the game, a freshly signed jersey from your opponent is the ultimate token of sportsmanship and respect among competitors.

Or, in some cases, the trade signifies an acknowledgement of excellence from your peers.

Since their rookie seasons in 2017, Carolina Panthers running back Christian McCaffrey and Los Angeles Chargers running back Austin Ekeler are two of four NFL players who have at least 1,500 rushing yards and 1,500 receiving yards. The others are New Orleans Saints running back Alvin Kamara and Atlanta Falcons running back Todd Gurley II.

“It’s got to be something sentimental behind it,” said Ekeler on his selection process for swapping jerseys.

“McCaffrey and I trained together [in Colorado]. He was a high prospect coming in, and I was this guy on the side … Austin Ekeler, from a Division II school. I was always comparing myself and my measurables to him and trying to see like, ‘OK, how do I compare to these guys?’ It just helped me push myself mentally and physically.”

Regardless of the reason or the relationship, players have their own protocols in place when it comes to making the transaction.

“If you haven’t had conversations before, like in DMs, then you let them know before the game, ‘Hey, man, if you wanna jersey swap, I’m down with it,'” said Colts linebacker Darius Leonard, who lists jerseys from Tennessee’s Derrick Henry, Watson and McCaffrey among the highlights of his collection.

“Or there’s times where you don’t realize you’re going to swap with someone who is under the radar. You could walk up to him and say, ‘Hey, man, you had one helluva game. I want to jersey swap.’ You’re just showing respect.”

The swap is ‘usually organic’

“You make it sound so inorganic!” Saints defensive end Cameron Jordan said with a laugh when asked to describe how the process of swapping jerseys happens. Then, he elaborated.

“It’s usually organic: ‘Hey, bro. Been meaning to get that jersey. Run it.’

Jordan is the proud owner of dozens of jerseys once donned by those whom he considers legends in the game: tight end Jason Witten, running back Adrian Peterson and defensive end Von Miller, for starters. His prized possession, though, is the last game-worn jersey of former Panthers defensive end and future Pro Football Hall of Famer Julius Peppers.

But as simplistic as trading jerseys with opponents might seem, there remains an unspoken code.

One-sided adulation is usually not part of the transaction: otherwise things can get … awkward.

Players from across the league are used to trading jerseys on the field after games, but because of the NFL’s coronavirus protocols, the jersey swap tradition has been completely transformed.

“Every now and then,” Jordan said, “you get offensive linemen who ask for your jersey. As a defensive end, you aren’t really inclined to run that jersey, but as a man, you sort of have to.

Jordan shrugged his shoulders slowly, dramatically, and paused. “Now … you’re putting me in a bad position. I don’t want your jersey, I don’t know you. So I guess this is a one-way deal.

“You don’t just walk up to a legend like, ‘Hey, run me your jersey.’ There’s an order there.”

“Oh, I made sure my credentials were right,” Jordan said. “I was three or four Pro Bowls in.

“I wanted to make sure I wasn’t a scrub.”