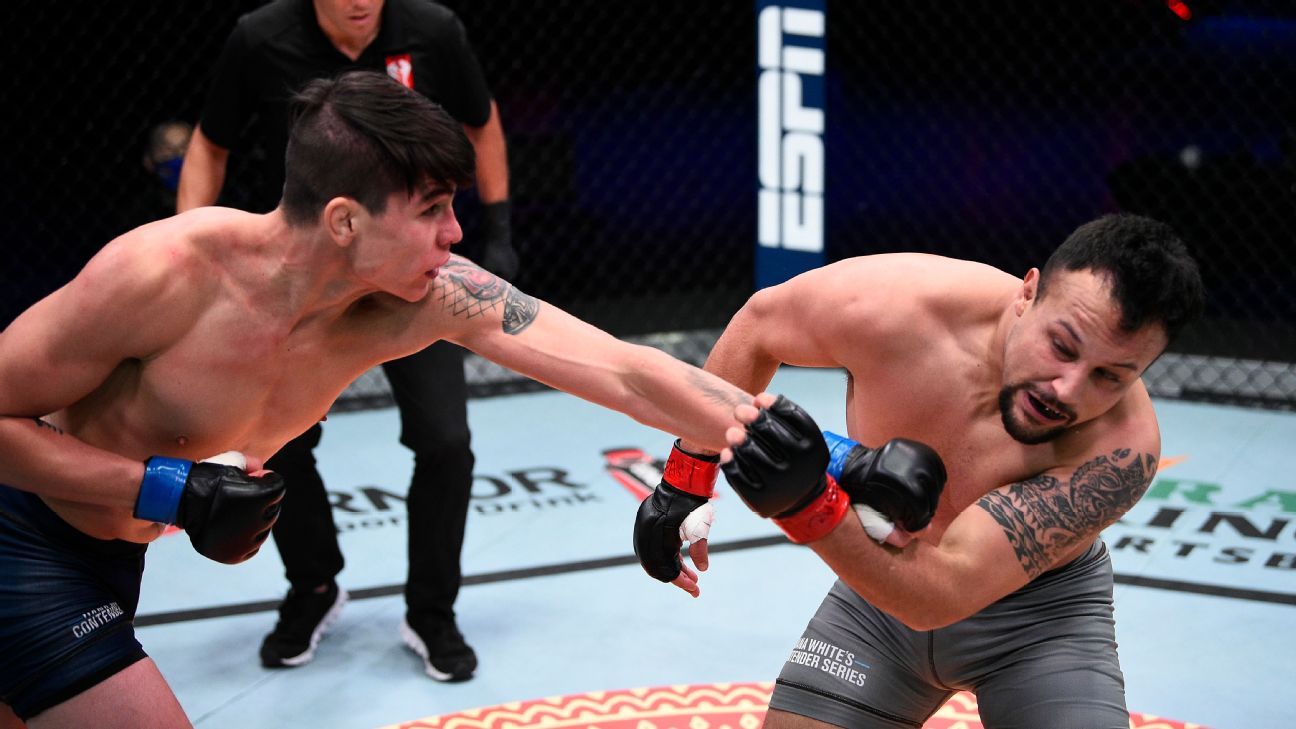 Turns out, the champ wasn’t lying about his buddy’s potential.

Ulberg (3-0) joined Adesanya amongst the UFC ranks on Wednesday, as he earned a UFC contract by knocking out Bruno Oliveira (8-2) at the UFC’s Apex facility in Las Vegas. Ulberg was one of four athletes to sign with the promotion, as UFC president Dana White awarded a contract to every winner on the four-fight card.

“Tonight is what you call a no-brainer,” said White, on handing out the four contracts.

Even on a high-quality Contender Series card, Ulberg, of Auckland, New Zealand, stood out. A former rugby prospect, turned kickboxer, turned MMA fighter, Ulberg knocked Oliveira out cold with a left hook at the 2:02 mark of the opening round. He caught Oliveira with a counter left hook as he came in, and then doubled up on the punch for the knockout. His second left hook sent Oliveira crashing to the floor.

“This kid is 2-0, and fought a guy who was 8-1 tonight,” said White, of the 29-year-old light heavyweight. “He has a ton of kickboxing experience and beat a guy easily, who has six knockouts and one submission. And you think he’s marketable? He’s a good looking kid.”

In addition to Ulberg, who was cornered on Wednesday by Adesanya, the UFC signed Chilean welterweight Ignacio Bahamondes, featherweight Luis Saldana, and heavyweight Jared Vanderaa.

Bahamondes (11-3) knocked out Edson Gomez with a viral-esque front kick to the face at 2:31 of the second round. Gomez, who missed weight for the welterweight bout, showed heart in taking a ton of damage throughout, but he was clearly out of his league against the talented 23-year-old striker. White raved over the finish, saying, “There is no way in hell that isn’t the [No. 1 play] on SportsCenter tomorrow.”

Saldana (14-6) also scored a front kick finish at the 44-second mark of the third round against Team Alpha Male’s Vince Murdock. Saldana looked great in the first and second rounds but came out on a mission in the third, stunning Murdock with the jab and then hurting him with a front kick to the face. Referee Herb Dean gave Murdock time to recover, but Saldana finished it moments later with strikes on the ground.

And in the heavyweight division, Vanderaa (11-4) picked up a convincing first-round TKO over late-replacement opponent Harry Hunsucker. Hunsucker went for the knockout early and had some success with the left hook, but Vanderaa weathered the brief, early storm, took Hunsucker down and quickly finished him with strikes along the fence.

Wednesday was the first episode of Dana White’s Contender Series since Season 2, Week 8 with a 100 percent finish rate. This episode was Season 4, Week 8.