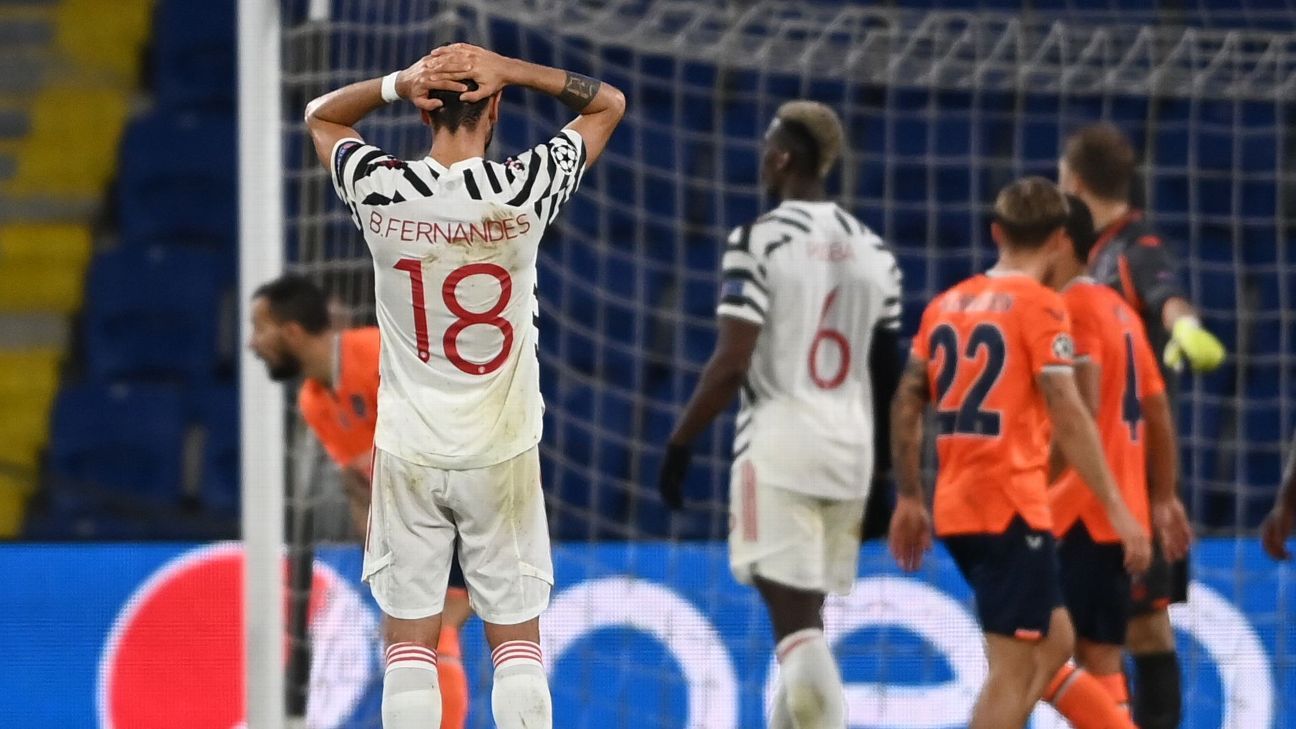 Manchester United lost in the group stage of this season’s UEFA Champions League for the first time as they were humbled in a 2-1 loss to Istanbul Basaksehir on Wednesday night. A bizarre lapse of judgement on the halfway line allowed Demba Ba a breakaway to open the scoring before Edin Visca made it two, following a deft dummy by Ba in the 40th minute. Anthony Martial rose to head the visitors back into it before the break, but United never quote able to find an equalizer in the second 45.

When United were getting into the final third in the first half, they were doing so with an exciting high line combined with some nice one-two passes to help them along. Then, as they went chasing after the game in the second half, they were far more patient and had a much more structured build-up to every attack they made against the Turkish champions.

The overconfidence on display from the Red Devils was somewhat astonishing at times, and it’s one of the primary reasons why they fell 2-0 behind. They left gap after gap at the back and every single time Istanbul came forward on the counter there was a real worry they’d concede.

4 — There was an experimental nature to Ole Gunnar Solskjaer’s starting XI and that probably has something to do with their first two group stage wins over PSG and RB Leipzig. Unfortunately, the dynamic of the team just didn’t seem to flow, and when Plan A didn’t work the Norwegian went in the direction of throwing five random substitutes on and hoping for the best.

GK Dean Henderson, 6 — The back-up keeper had a commanding presence between the posts, although he arguably could’ve done better for the hosts’ second goal.

DF Luke Shaw, 6 — From being out of position for Visca’s goal to producing the assist for Martial’s header it was a mixed day at the office for Shaw. One of United’s leading forces in searching for an equaliser.

DF Harry Maguire, 5 — Maguire’s lack of spatial awareness was exposed after he failed to get back for the opener and he was drawn out of position again for the second.

DF Axel Tuanzebe, 4 — The youngster really struggled in every area whether it was marking Ba, having any kind of aerial presence or being lucky not to get sent off after a poor first-half challenge.

DF Aaron Wan-Bissaka, 5 — Needs to work on developing more consistency with his crosses, and defensively, he should’ve known to get back prior to the counter for the first goal.

MF Nemanja Matic, 4 — The Serbian was caught napping for Ba’s strike, regressed into a centre-back role and nearly gave away a first-half penalty.

MF Bruno Fernandes, 4 — His footwork was impressive but Fernandes’ one-dimensional style hindered United and ensured that he was unable to provide them with any creative edge. Played Mata into trouble in the lead up to the second goal.

MF Juan Mata, 4 — The little wizard looked completely off his game with his touch and timing being questionable, as he showcased when giving the ball away for the decisive second goal.

MF Donny van de Beek, 7 — The Dutchman held possession well, got stuck in when he needed to do so and opened up the game several times.

FW Marcus Rashford, 5 — Received very little service and focused most of his attention on opening the door for Martial to receive more attacking opportunities.

FW Anthony Martial, 7 — After being marked out of the game early on, Martial was able to drag United back into it with a nice header just before half-time.

DF Timothy Fosu-Mensah, N/R — Recovered well after a mistake in the 85th minute that would’ve put the result beyond any doubt.

MF Scott McTominay, 6 — Sat deep, won the ball back on a handful of occasions and steadied the tempo in midfield.

MF Paul Pogba, 5 — Switched the ball out wide well enough but didn’t drive United into dangerous positions as fans hoped he would.

FW Edinson Cavani, 6 — Simply couldn’t do enough to force the issue with his main highlight being a half-hearted attempt at earning a penalty.

FW Mason Greenwood, N/R — Tried to get on the ball and make things happen but constantly ran into a solid Basaksehir wall.