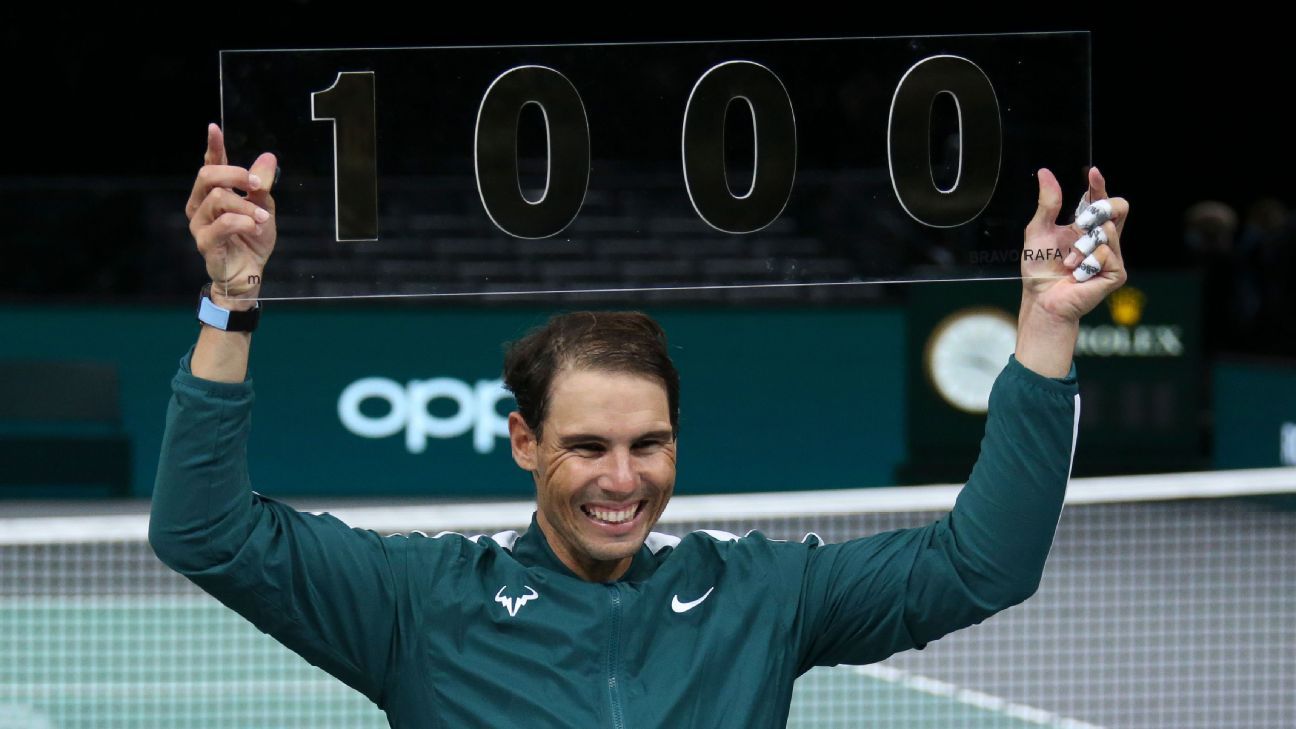 Less than a month after joining Roger Federer as the second man with 20 Grand Slam singles titles, Rafael Nadal now accompanies the Swiss in another exclusive club. Nadal’s Paris Masters opening-match win over compatriot Feliciano Lopez makes him the fourth man in the Open Era (since 1968) with at least 1,000 ATP tour-level victories, after Jimmy Connors (1,274), Federer (1,242) and Ivan Lendl (1,068).

Nadal’s first tour-level victory came in May 2002 when the 15-year-old, ranked in the lower 580s that month, beat Paraguay’s Ramon Delgado, then ranked 81, in the first round of his hometown tournament of the Mallorca Open.

Nadal’s win-loss record at the Grand Slams, translating to a winning percentage of almost 88%. What this also means is that over a third — about 35.5%, to be exact — of Nadal’s wins at majors have come at Roland Garros.

Nadal’s win-loss record so far on clay. With a win rate of almost 92% and 60 titles, clay is obviously his best surface by far.

The Spaniard’s win-loss record so far on hard courts, counting Wednesday’s win on the indoor hardcourts in Paris. With a winning percentage just over 78 and 22 titles, hard courts are Nadal’s second-best surface.

Nadal’s record on grass. With a win rate of 78% and four titles, grass is generally considered Nadal’s weakest surface.

Nadal’s record on carpet, a very fast removable type of court whose use has been discontinued by the ATP since 2009.

The biggest bite yet ��

American Hugo Armando in the second round, en route to winning the 2005 Stuttgart Open.

Croatia’s Ivo Karlovic in the quarterfinals of the 2008 Queen’s Club, where he won his first grasscourt title

Croatia’s Ivan Dodig in the semifinal of the 2011 Barcelona Open, Nadal’s sixth title in Barcelona

Del Potro in the final of the 2013 Indian Wells Masters. The title was Nadal’s third of the year already following his return to the tour after a seven-month layoff due to a knee injury

Slovakia’s Martin Klizan in the first round of Wimbledon 2014

Brazil’s Thomaz Bellucci in the quarterfinals of the 2016 Rio Olympics. Nadal went on to lose the singles bronze-medal match to Japan’s Kei Nishikori

France’s Richard Gasquet in the third round of Roland Garros 2018, which was his 11th French Open

Nadal’s win-loss record against Top 10 players, a win rate of over 65%