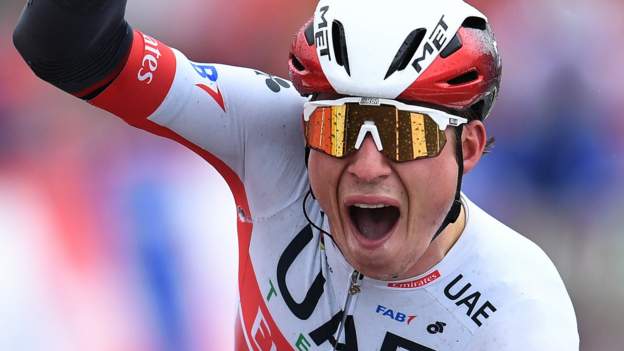 Belgian Jasper Philipsen held off Pascal Ackermann in an uphill sprint finish to win stage 15 of the Vuelta a Espana in tough conditions, as Primoz Roglic held on to his overall lead.

The UAE Team Emirates rider, 22, took his first Grand Tour stage win on the longest leg of this year’s race.

Carthy is eight seconds behind Ineos Grenadiers’ Carapaz, with Ireland’s Dan Martin a further 55 seconds back in fourth.

The hilly 230.8km stage from Mos to Puebla de Sanabria included five categorised climbs – with over 4000 metres of climbing in all – and was ridden in testing conditions.

A lead group of 13 – reduced to 12 as stage 14 winner Tim Wellens dropped back – had to contend with a strong headwind for the final 50km, though that did not deter Deceuninck-Quick Step’s Mattia Cattaneo from launching a solo attack with 30km remaining.

However, the Italian was caught 3.5km from the finish, leaving Philipsen to take the victory ahead of Bora-Hansgrohe’s Ackermann and Deceuninck’s Jannik Steimle.

On his victory, Philipsen said: “That’s amazing. I can’t describe how happy I am with this victory. That means a lot for me. I’ve been waiting for the right moment since the start of La Vuelta and today it came.

“They can’t take this victory away from me, so I’ll enjoy this moment, try to finish my first Grand Tour now and I’m super proud of this.”

Just three stages remain of the Vuelta, which was shortened from 21 to 18 stages because of the coronavirus pandemic affecting cycling’s calendar.

Stage 16 on Friday is another hilly 162km route from Salamanca to Ciudad Rodrigo, which features a first category ascent of El Robledo, before Saturday’s arduous penultimate stage takes the riders up to La Covatilla ski resort in Salamanca.