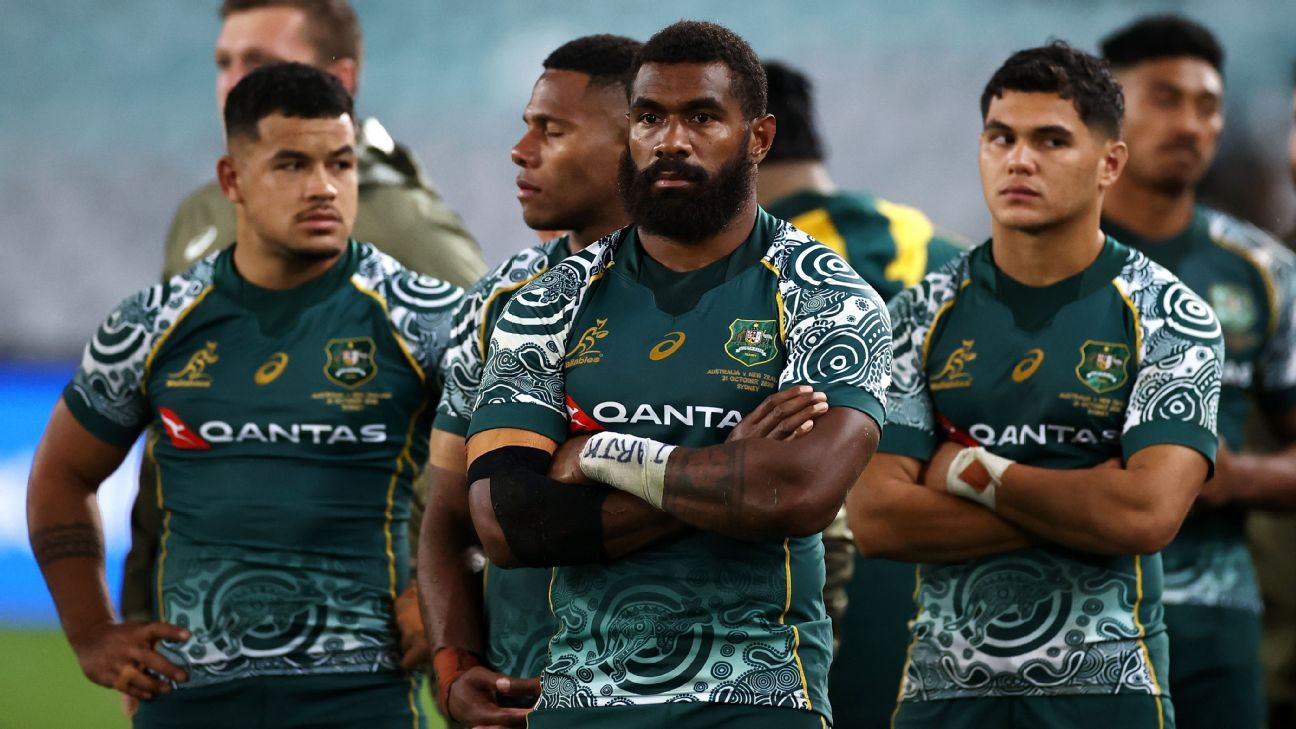 There is no hiding from the obvious: The Wallabies have played truly terrible rugby for the past 120 minutes.

As a result, they have turned a promising first-up showing in Wellington and solid opening half in Auckland into an ugly 2-0-1 record that means the Bledisloe Cup has been filled with Steinlager, instead of Tooheys New or XXXX, for an 18th straight year.

And they now must set about salvaging something from the dross of their Sydney hiding and give Australia at least some reason to believe that the Dave Rennie era might be worth tuning in to beyond this season, which still has two more Tests against the Pumas, to come.

Saturday night’s fourth Bledisloe Cup encounter, at Suncorp Stadium in Brisbane, is first and foremost an opportunity to repair some of the reputational damage done by the 43-5 horror show from Sydney last weekend.

And having learned little from their erroneous misadventures in Auckland, the hope is that Rennie has been able to drill down on some of the simple, downright non-negotiable, skills where Test rugby is won and lost.

There can be no more of the poor ball security; the pushed passes; the wayward kicking; the missed tackles; the poor discipline; that have gifted the All Blacks the kind of turnover opportunities they have thrived off across their almost two-decade-long domination of the biggest trans-Tasman prize there is.

“The first thing is [that] we reminded the boys; its Test footy, and so we we’re just way too loose with ball in hand,” Rennie said in announcing his team on Thursday. “And as we’ve learned the last two Tests, you just can’t hand the ball back to the All Blacks.

“We defended really well after halftime [in Sydney] for about 25/30 minutes; we’d defend well for five or six phases, win a penalty, get down there and turn it over immediately. And that cycle happened three or four times and eventually the All Blacks kicked a penalty and they punished us on a turnover from a lineout on the 70 minute.

“They’re tough lessons but this is Test footy and we’ve got to treasure the ball.”

With the promotion of utility Reece Hodge to No. 10, alongside the fledgling centre pairing of Hunter Paisami and Jordie Petaia, there are likely to be no surprises about how the Wallabies will go about their game in Brisbane.

None of the trio is regarded as a distributor, so Tom Wright shouldn’t expect too much ball on his Test debut.

And then there is the promotion of back-rower Lachie Swinton, who replaces Waratahs teammate Ned Hanigan at No. 6, in a pack that has been forced to recall veteran lock Rob Simmons – a player who irks Australian supporters more than anyone – into its starting eight.

“Lachie, what we like about him at training is, he creates a bit of edge because he’s physical and even if it’s supposed to be 60 percent, he’s running around at 100,” Rennie said. “So we expect him to bring that sort of intensity to the game.

“He’s a big defender, excellent around clean-out; he’s developing his distribution game and so on, and developing as a lineout forward, but we think the edge that he can bring will bring opportunities elsewhere.

“So we’re excited, he’s worked really hard and certainly impressed us over the last few weeks.”

What Swinton must not do is commit a similarly inexcusable error to the one that Filipo Daugunu made in Sydney last week. Having said he planned to hit All Blacks opposite number Caleb Clarke early and hard, Daugunu charged into the legs of the New Zealand left winger while he was in the air, earning the Australian a yellow card.

While Jordie Barrett’s leading forearm soon squared the ledger at 14 aside, Daugunu’s brainfade gave New Zealand the early momentum shift they were never going to squander. Swinton, a player who, as Rennie described, creates physical edge, simply cannot cross the line between fair and illegal.

Making a strong start, as they did the last time the Bledisloe Cup was contested in Brisbane, in 2017, is imperative.

With the pressure of mooted expectation off and no trophy on the line, the Wallabies have in recent times produced some of their better displays.

Having already conceded an unassailable 2-0 series lead in 2017, Australia came to Brisbane for their first ever outing in the Indigenous jersey. After a physical, committed and smart 80 minutes, they walked away with a morale-boosting 22-17 win.

A similar result this weekend would be an almost satisfactory outcome from a series that many thought could potentially end 4-0 to the All Blacks.

The Wallabies’ excellent first outing under Rennie perhaps offered some fools ‘gold, so too the first 40 in Auckland, and that Australia were immediately a different prospect under the New Zealander.

And the disappointment of their Sydney shocker was probably only further inflamed by Rennie’s post-match statement that the Wallabies were “six weeks into a four-year journey”, particularly when, upon first taking the job almost a year to the day, he admitted the Australian public would demand success from the outset.

Those who were inspired by the terrific Wellington display, but then felt an all too familiar feeling in both Auckland and Sydney, will rightfully feel that the past fortnight has done little to suggest Rennie’s tenure can be anything different to his predecessor Michael Cheika.

But a performance that shows the Wallabies are capable of nailing the game’s basics, and demonstrates they understand the need to respect possession and has the defensive commitment that reflects the pride they take in the jersey, isn’t asking for much at all.

And it can salvage something from a season that everyone is thankful at least got started, offered a flickering moment of genuine hope Australian rugby might be set for better days, but then descended into something all too frustratingly familiar.

The Wallabies simply must produce a competent performance that sets them on a path to two must-win games against the Pumas, and create the smallest bit of optimism about what might lie ahead come 2021.