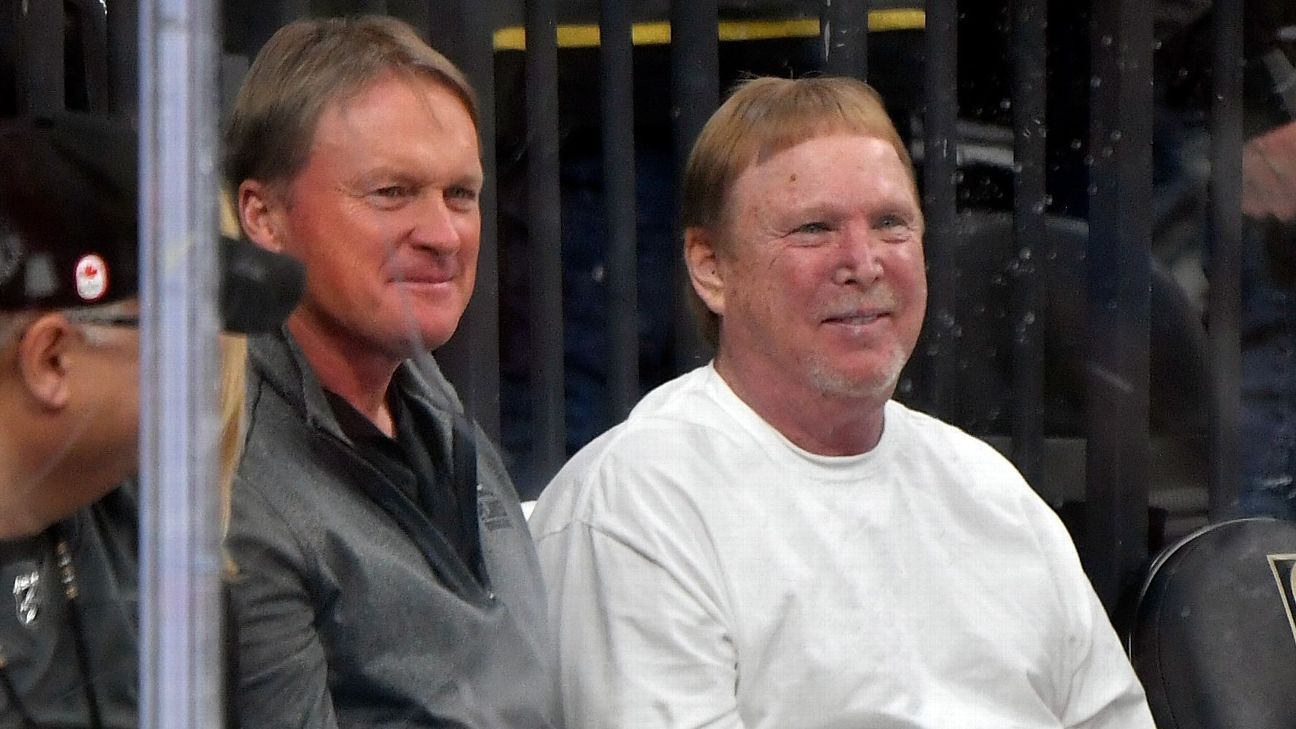 HENDERSON, Nev. — Las Vegas Raiders owner Mark Davis took issue with his team being fined $500,000 and being stripped of a sixth-round pick in the 2021 draft and coach Jon Gruden being docked an additional $150,000 for what one source described as “brazen and repeated violations of [COVID-19] protocols.”

“The fines are draconian,” Davis told ESPN on Friday. “But we will appeal them. Outside the organization, people have the wrong impression about the Raiders. We take it seriously. It’s unfortunate that certain things outside the protocol are the things being focused on, rather than the positive steps we’ve taken as an organization. You’ve been in the building. You’ve seen it.”

Davis was referring to daily COVID-19 tests, temperature checks, trackers and masks being mandatory to enter the team’s facility.

“Jon and those guys are working their asses off every day. But at the same time, (the NFL) feels we’ve failed some of those mandates.”

Las Vegas had already been docked $250,000 and Gruden $100,000 for his not wearing a mask properly during the team’s Week 2 home opener. The team also was fined $50,000 for allowing a non-credentialed employee access to the Allegiant Stadium locker room following that game.

Plus, tight end Darren Waller was fined $30,000 and nine teammates, including quarterback Derek Carr, were fined $15,000 each for appearing at a Waller Foundation indoor charity event mask-less and mixing with the crowd on Oct. 5.

In total, Las Vegas has racked up $1.185 million in fines for breaking COVID-19 protocols thus far, and the Raiders are the first team to lose a draft pick over the violations.

Gruden, who previously said he had the virus this summer, did not want to discuss the penalties in detail during his availability with the media Friday.

“I’m just going to say (I’m) very proud of our organization, how we’ve handled this entire protocol and this entire process and I’m not going to comment any further than that,” he said. “We, as I said last week, I believe we’re on the cutting edge of being the best in servicing players and I’ll leave it at that.”

Asked if he felt the Raiders were being singled out, Gruden did not bite.

Two weeks ago, Pro Bowl right tackle Trent Brown tested positive for COVID-19, but because he was not wearing his tracer at the team facility, and several players were not wearing masks after rookie cornerback Damon Arnette had gone on the reserve/COVID-19 list, the four other members of Las Vegas’ starting offensive line — left tackle Kolton Miller, left guard Denzelle Good, center Rodney Hudson and right guard Gabe Jackson — were deemed high-risk close contacts and all had to self-quarantine during the week.

As a result, and in an abundance of caution, the Raiders’ scheduled game against the Tampa Bay Buccaneers that week was moved from prime time into an afternoon kickoff and the four were not cleared to play until the morning of the game.

Brown, who came off the reserve/COVID-19 list last week and was slated to start at Cleveland, endured a pregame IV mishap that resulted in his staying the night in a local hospital. He returned to the Raiders on Wednesday and on Thursday but since he is still dealing with complications from the virus, went back on the COVID list on Thursday.

Sources said the Raiders had been warned more than once about specific violations but those violations have continued. More severe penalties could follow with further violations.

Information from ESPN’s Dan Graziano was used in this report.