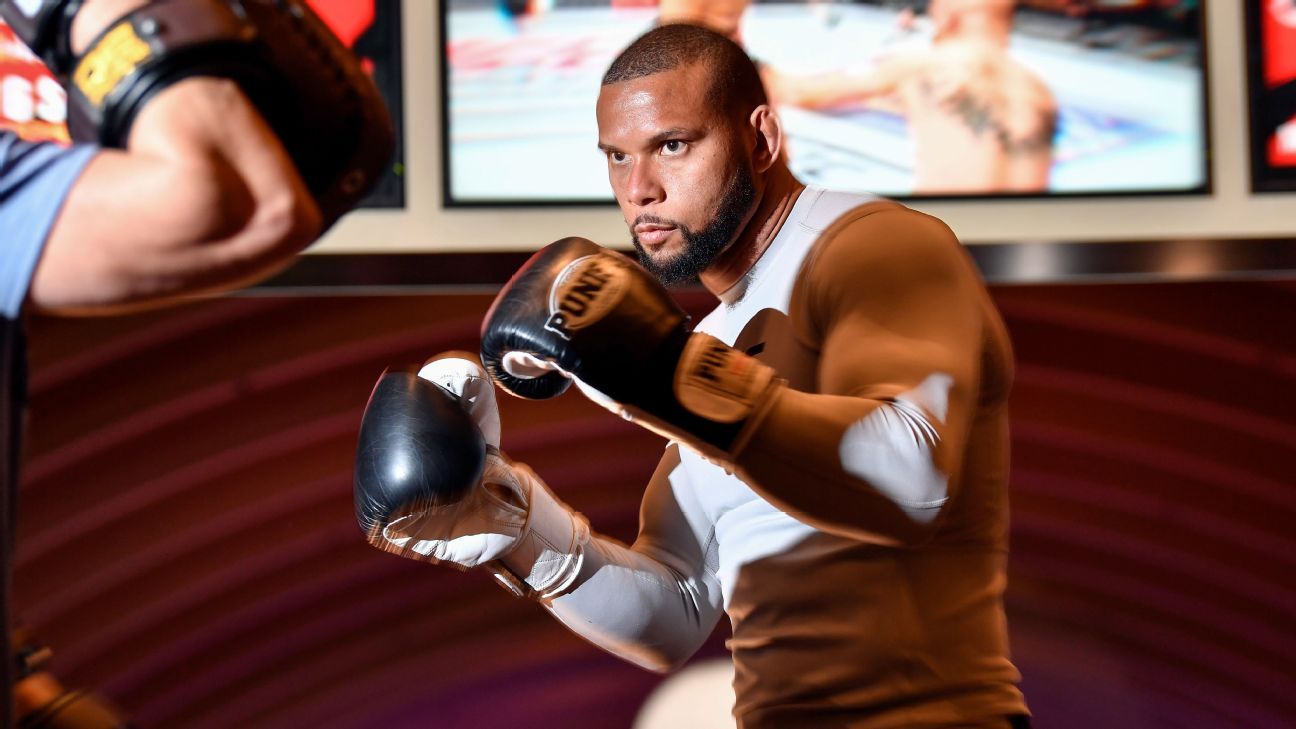 On July 6, 2019, Thiago Santos came closer than anyone else in the history of the UFC to legitimately defeating Jon Jones.

Yes, Vitor Belfort had Jones in trouble with a submission attempt in 2012. Alexander Gustafsson beat him up pretty good in a unanimous-decision loss in 2013. And there are a lot of fans and media members who thought Dominick Reyes did enough to beat Jones in February, only to lose by unanimous decision.

But Santos (21-7) is the only one who can say he went five rounds with Jones and one judge scored the fight for him. However, the other two judges did not, and Santos suffered a split-decision loss at UFC 239.

He didn’t just lose the fight. Santos also tore the ACL, MCL, PCL and meniscus in his left knee. The 36-year-old Brazilian went from nearly beating one of the greatest fighters of all time to thinking he may never fight again. Those injuries — and other factors in 2020 — led to a 16-month layoff, the longest of his career.

Santos will have to wait if he’s ever going to get a rematch with Jones, who vacated his belt to pursue the heavyweight championship. Instead, Santos will face Glover Teixeira (31-7) at UFC Fight Night on Saturday in Las Vegas. It was originally supposed to produce the No. 1 contender for Jan Blachowicz’s title, but it appears middleweight champ Israel Adesanya will get the first shot at the new light heavyweight champ.

For Santos, Saturday marks the culmination of an agonizingly long road back to the Octagon. During those 16 months, Santos documented various milestones of his journey on social media, including how his girlfriend, UFC bantamweight Yana Kunitskaya, impacted his recovery.

Here is a look at the return of Santos, in his words. Santos’ accounts were translated by his manager, Alex Davis. Some content was edited for clarity and brevity.

I was sad that night, because I lost. I gave it my best and was pretty confident I was going to take the belt from Jones.

I didn’t go to the hospital that night. I went back to my hotel, and then the hospital the next day. But I knew my knee was completely torn, because every time I tried to get up and urinate the night after the fight, I couldn’t get up. I needed help to get to the bathroom.

I was supposed to fly home to Brazil from Las Vegas three days after the fight, but they told me I needed surgery right away. My son flew home without me, but I stayed in Vegas for the operation.

Four-hour surgery. All I remember about the time immediately after it was pain. A lot of pain.

I couldn’t do anything alone. I needed help for everything. I did wonder if I would ever be the same. Even when the doctor first told me he needed to operate, that was a thought that passed through my mind.

And once I started to feel all the pain, and the difficulty of not being able to do anything alone, it popped into my mind now and then that I would never fight again.

Each thing creates more joy, encouragement, motivation and, over time, everything goes back to normal.

Yana was monumental, not only in the physical part of my recovery, but the mental. She kept saying I would be OK, that I would come back and fight again. She was one of the most important people in my recovery.

I couldn’t be with her for her whole camp when she fought [Julija Stoliarenko in December 2019], because I had flown home to Brazil, but I was able to come back for the last week of it. I had gone about a month-and-a-half without seeing her during that time. It was very good to be with her, because she’s a fighter, too, and understood the difficulties I was going through. It was very beneficial going through this with her.

After her fight [a unanimous-decision win], we went to Russia. In the beginning, I didn’t like it much, because of the cold. But once I found fun stuff, like snowmobiles, I didn’t mind the cold and it was really fun.

I was healthy enough to resume fighting at the beginning of 2020, and in March, I could have started a fight camp. But then COVID-19 hit.

I was frustrated, but at the same time, I believe in God, and I think that was just a time I needed to be even better than I was before. I was in Brazil during that time and the gyms weren’t open to everybody, but Yana and I were able to go to my school in the projects and work out together.

When I started doing the first kicks, she was holding the gauntlet for me. I was still full of fear, my eyes watered with emotion to be doing it again, to be kicking. Pain, I didn’t feel. It was more fear, psychological. I was very moved because I thought I would not be able to do that anymore.

In the beginning, I just wanted my rematch against Jones. But as time went on, all I really wanted to do was fight.

I have nothing against Jon leaving the division, and I think some day I will still beat him, but my focus is to be the champion, and right now, that’s what I am focused on. It was an incredible moment signing a contract to fight Glover and announcing the fight, because I realized I could do something that, at one point, I didn’t think I’d ever be able to do again.

This fight was canceled twice. First Glover got COVID, then I got COVID. I was having symptoms and I got tested. It was frustrating, but I also believed it was part of life and I believed in God.

“We were not confident at all the fight would be re-booked,” Davis said. “We’re living in a landscape where everything changes.”

Physically, I’m already feeling 100 percent. I have done everything in training: sparring, kicking hard, knee … everything normal. But I haven’t been fighting for a long time, I don’t know how my head, my adrenaline will be.

But I have a feeling it’s going to be all right. I will be very happy, doing what I love and everything will be fine.