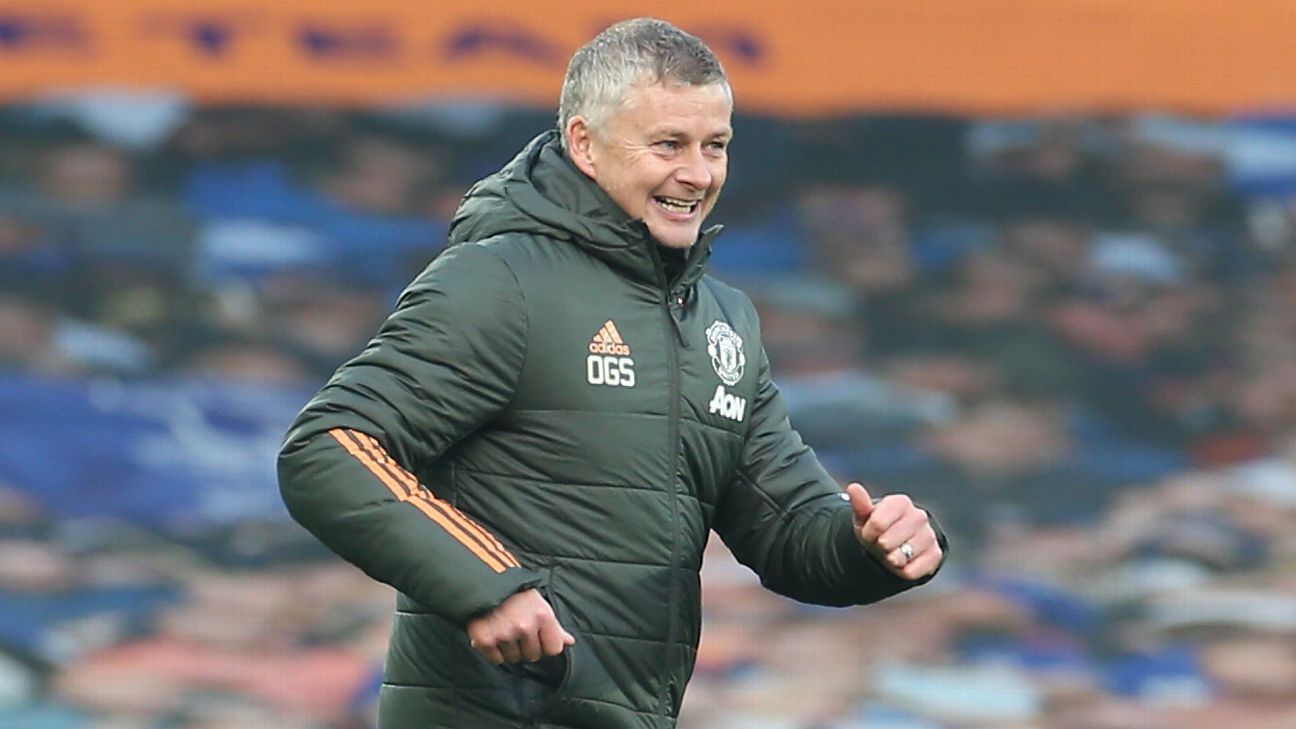 LIVERPOOL, England — It will take more than victory at Everton to prove Ole Gunnar Solskjaer’s prematch assertion that he remains the right man to resurrect Manchester United, but for now it will stop the bleeding.

After coming out fighting at his usual Friday news conference Solskjaer, under pressure following defeats to Arsenal and Istanbul Basaksehir this week, came up with a well-deserved 3-1 win at Goodison Park that at least buys him more time to back up words with results.

For the more pessimistic United fans it will be further evidence of a now familiar cycle. Good games followed by bad games and back again. If nothing else, Solskjaer has developed an incredible knack of producing a result when he needs one most. He owes this one to Bruno Fernandes, who scored twice in the first half after Bernard had put Everton in front on his first Premier League start.

It was Fernandes who took it upon himself to dish out instructions after the soft opener and then took responsibility for fixing it; first with a powerful header from Luke Shaw‘s ball into the box and then drifting a cross beyond Marcus Rashford and into the far corner. In the final minutes, he was wrestling Abdoulaye Doucoure at the back post in his own penalty area to ensure Everton wouldn’t equalise and then charging up the pitch to lay on a first goal for Edinson Cavani to put the game beyond doubt.

Solskjaer — who said afterwards his team had been “set up to fail” after being handed a Saturday lunchtime kick-off after a long trip back from Turkey — needs more players like him if he is going permanently end the swirl of speculation about his position and turn this team into a genuine title challenger.

“Bruno is a leader,” Solskjaer said after the final whistle. “Loads of desire and reaction was great from everyone. I’m very happy with the reaction to the week, the goal and the impossible kick-off time.”

As much as this was a result to lighten the mood around Old Trafford, Solskjaer was left counting the cost of a much-needed three points after injuries to Shaw, Rashford and Victor Lindelof.

“It doesn’t look great,” Solskjaer said. “Any injury, when it’s serious, isn’t worth the points but the boys were not going to give anyone a chance to take three points off us. They were so determined.”

Whether United fans want Solskjaer in or out, there can be little debate about whether the players are still behind him.

It is a quirk of their form that victory over Everton means they match a club record seven successive Premier League away wins set in 1993, while failure to win would have left them with their lowest points tally after seven matches of a top-flight season since 1989-90. Everton didn’t help themselves by defending in a manner that made it easy to see why they conceded more than one goal in five successive top-flight home matches for the first time since a club-record run of seven in 1958, but Solskjaer has also become a master at stopping the rot.

After a miserable defeat at Newcastle a year ago, United came within minutes of beating Liverpool and won the next three. Back-to-back draws with Sheffield United and Aston Villa were followed by unexpected wins over Tottenham Hotspur and Manchester City. Two defeats in four days to Liverpool and Burnley in January again had the sense of the beginning of the end for Solskjaer before a 19-game unbeaten run in all competitions. His lives haven’t run out just yet and this time it was Everton after Arsenal and Istanbul Basaksehir. It is Schrodinger’s United, capable of producing results that are both surprising and not at the same time.

After the international break, Solskjaer’s team are next in action against West Brom at Old Trafford but you will find very few fans willing to predict the result with any real conviction. They don’t know what to expect from one week to the next and the only thing consistent about Solskjaer’s 23 months in charge has been his regular demand for consistency.

“We want more consistency,” Solskjaer said. “We want to kick on and go on a run and climb the table. My job is to make sure that guard is up every time and that we don’t go into any game thinking it is going to be easy. It was an exceptional performance after a difficult week.”

Whether this triggers the type of winning run Solskjaer has put together before or he’s left answering more questions about his job this time next month is anyone’s guess. At least United executive vice-chairman Ed Woodward, watching from just above the benches, can breathe a little easier for the next two weeks knowing his next big decision can wait a while and Mauricio Pochettino can stop sitting by the phone. Maybe in time this result will turn out to be the game that marked the beginning of the end for the calls of “Ole out.” Or maybe not.