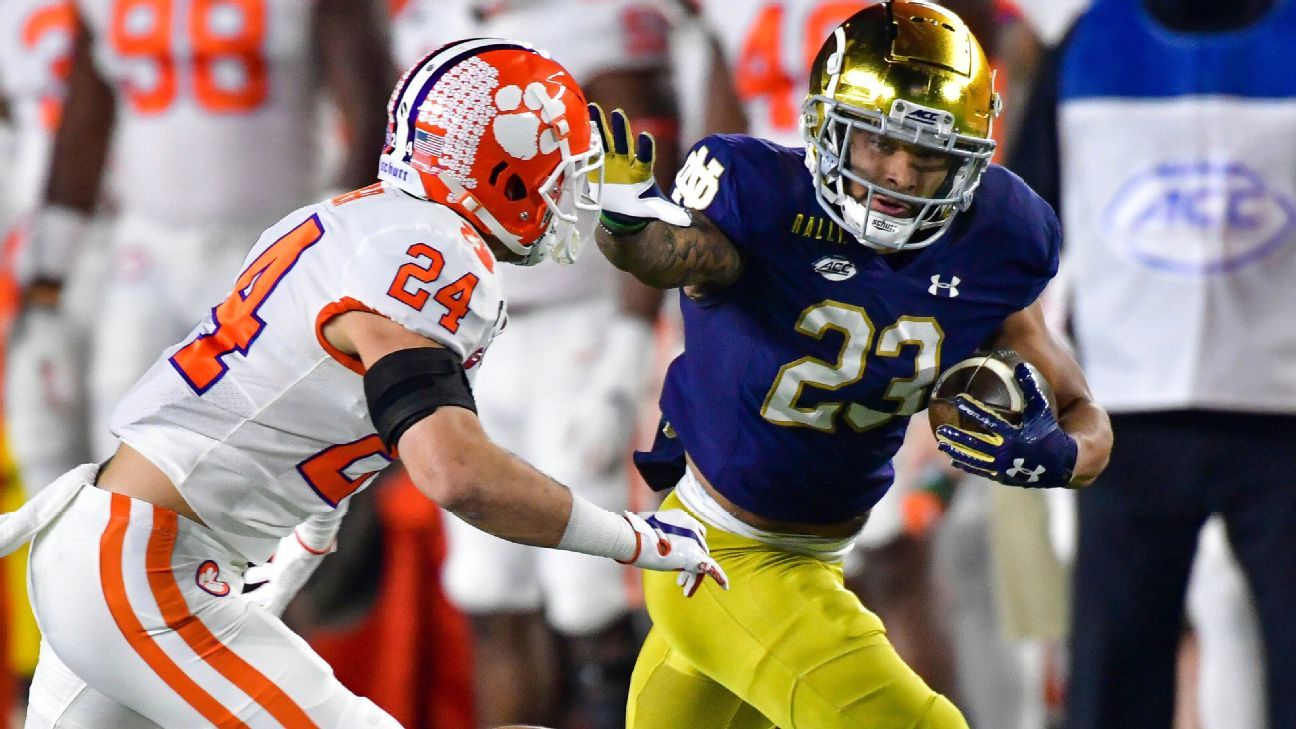 As if the College Football Playoff selection committee didn’t have enough to debate this season.

Unbalanced schedules, delayed starts, disruptions and cancellations because of the coronavirus pandemic. And then, on Saturday, the ACC and SEC further complicated the playoff picture when they both bolstered an early case for having two top-four contenders.

No. 1 Clemson and No. 4 Notre Dame, with a chance to meet again in the ACC championship game, were separated by a mere touchdown in the Irish’s 47-40 double overtime win, while Florida and Alabama also appear to be on a collision course for their conference championship game.

While it might seem a little early to present that potential debate, the most difficult stretches of their schedules are already behind them, and they should all be favored in each of their remaining games. ESPN’s Football Power Index gives Clemson, Notre Dame, Alabama and Florida a greater than 71% chance to win each of their final regular-season games.

With Alabama and Ohio State both on the fast track for top-four finishes, it’s possible the committee chooses them along with Clemson and Notre Dame (if Clemson beats the Irish to win the ACC title and both finish with one loss — to each other). The committee could also consider a top four that comprises Ohio State, the ACC champion, Alabama and Florida, should the Gators upset the Tide in the SEC championship game.

Considering how closely contested the Notre Dame-Clemson game was, though, the ACC’s playoff position feels like the more realistic scenario for a Power 5 conference to place two teams within the top four. The selection committee will take into account the fact Clemson quarterback Trevor Lawrence was sidelined in that game because of the coronavirus, but the Tigers’ quarterback situation won’t be the defining piece of Clemson’s playoff potential, nor will it detract from what Notre Dame accomplished.

Clemson’s most difficult remaining game is Dec. 5 at Virginia Tech (78%) — and the Hokies just lost to Liberty. They’re also the only ACC team left on Clemson’s schedule that’s over .500. Notre Dame arguably has the most challenging finish, with three of its final four games on the road, including a Friday night game at North Carolina.

Irish coach Brian Kelly is leery of a letdown and put an immediate halt to playoff talk Saturday.

“We’ve got so much more work to do, and look, BC [Boston College] is going to be a challenge for us,” Kelly told reporters after the Irish’s win against Clemson. “I’ve got to get this football team back up, emotionally ready to play. We’ve got a target on our backs now. There are so many more things on my plate, relative to what I have to do, than really concern myself with playoffs and who’s in and who’s not in? There are other people who will do that.”

And it might be their most difficult decision ever.

While Alabama was off for a bye week, the SEC East took center stage on Saturday, and Florida emerged as its leader with a 44-28 win against No. 5 Georgia. According to ESPN’s FPI, Florida now has an 89% chance to win the East. As of now, the Gators’ final five opponents have a combined record of 9-18, and none of them are over .500. The Gators’ toughest remaining game, according to FPI, is their regular-season finale Dec. 12 against LSU (75.9%). There’s no reason for an upset, but if Florida does stumble along the way, it’s clearly not ready for a semifinal.

Florida coach Dan Mullen said he would like to see just how good his team can be when it’s on the field in its entirety. The Gators have been shorthanded for almost every game for various reasons, and on Saturday, tight end Kyle Pitts left the game with an injury.

“We’re to the point right now we’re in first place in the East at the midway point,” Mullen said. “How far can we go? I don’t know. Hopefully we can get back to work [Sunday] and find a way to beat Arkansas next week, and if we’re worried about anything but that, then we’re not going to continue to enjoy great things we’ve been enjoying so far this year.”

Florida’s 41-38 loss at Texas A&M also isn’t looking as bad as it did on Oct. 10. The No. 7 Aggies manhandled South Carolina 48-3. What happens if Texas A&M wins out — and has a win over the SEC East champs — but Alabama wins the West?

Now throw Clemson and Notre Dame into the debate, and the committee has real mess to sort out. Will the committee regard the second-best teams in the ACC and SEC as better than the Pac-12 champion? An undefeated BYU? Cincinnati?

The Pac-12’s top two playoff contenders — No. 12 Oregon and No. 20 USC — won their respective openers, earning the conference the start it needed, albeit a significantly later one. The longer the league’s ranked teams can stay ranked, the longer it will remain a part of the playoff conversation.

While it’s still far too early to tell if either team is top-four material, if one emerges as an elite conference champion, it will be considered by the committee for a semifinal spot — in spite of a shorter, seven-game schedule.

The question is if the Ducks or Trojans can rise from good to great quickly.

As expected, both teams made mistakes in their first games in almost a year, but USC defied the laws of football by beating Arizona State 28-27 in spite of committing four turnovers. It was also a 9 a.m. PT start for a team that hadn’t played a game in almost a year.

USC coach Clay Helton said he told the team “we all made mistakes,” but there were also “some really good things here.”

“This team can be really good, and yes, there was a lot of rust, and we shook it off,” Helton said. “But the thing that makes this team, I think, special is their mindset and how they deal with adversity, and the playmakers.

“And then defensively, if we can eliminate the big plays — and a lot of them came from the quarterback getting out of the pocket — if we can eliminate those, this has got a chance to be a really good team. That was a major hurdle for us today. We knew how big it was, we knew what it meant for the conference and to get this one today is huge.”

With only seven games, that’s how it will be each week in the Pac-12.

Is the Big Ten deeper than Ohio State?

Maybe, but not because of Penn State or Michigan.

The Buckeyes’ next two games are against Maryland and Indiana — two teams that have shaken the Big Ten’s balance of power in recent weeks with wins over Penn State and Michigan. While the Terps and Hoosiers have taken critical steps forward in recent weeks, they’re not yet at the elite level of Ohio State as the programs continue to develop.

Do they have enough confidence and momentum, though, to pull off an upset?

The Buckeyes are still favored to win each of their remaining games, but who will win the Wild West? Assuming Ohio State continues to roll right into the Big Ten championship game, there’s no telling who it might face right now, as Northwestern, Purdue and Wisconsin remain undefeated. Wisconsin has played only one game and the Badgers’ situation is precarious after cancelling two games because of a COVID-19 outbreak within the program.

The Badgers have to play each of their five remaining games, starting Saturday at Michigan, to meet the Big Ten benchmark of six games to qualify for the conference championship game. Purdue has also missed a game because it was supposed to play Wisconsin.

The Big Ten’s unprecedented season continues, with Ohio State seemingly the only team following the script so far.

Who can crash the party?

According to the Allstate Playoff Predictor, it starts with Cincinnati, which won its 18th straight game with Saturday’s 38-10 win against Houston. If Cincinnati wins out (including the AAC championship game), the Bearcats would have a 38% chance to reach the playoff, according to the Allstate Playoff Predictor. Heading into the weekend, that was the fourth-highest chance to reach the CFP — behind Alabama, Ohio State and Clemson.

The selection committee compares common opponents, and both Cincinnati and undefeated BYU have now defeated Houston. The Bearcats held Houston to 10 points and 282 yards; BYU trailed Houston 26-14 in the third quarter and led 29-26 with four minutes left before scoring two touchdowns. Houston had 438 total yards.

The common opponent is only one factor. Strength of schedule is another, and Cincinnati could have the edge there. The Bearcats have three wins against teams with winning records, while BYU has two in eight games.

BYU picked up a much-needed win against a ranked opponent on Friday with its 51-17 drubbing of No. 21 Boise State on the blue turf. The question is if the Broncos will be deemed a top-25 opponent in the eyes of the committee. Cincinnati also has a win against a ranked opponent, Oct. 24 at No. 16 SMU. BYU has only two games remaining — Nov. 21 against North Alabama and Dec. 12 against San Diego State — and should win both convincingly. Cincinnati has a more difficult road, with three of the final four games on the road, and ESPN’s FPI gives the Bearcats only a 33.3% chance to win at UCF on Nov. 21.

If Cincinnati wins out and finishes as AAC champion, it’s likely to win a résumé debate against independent BYU. While both of them have a chance to earn a spot in a New Year’s Six bowl, Cincinnati appears to have the more favorable position to make a push for more.

The ACC and SEC might have made it more difficult, though, on Saturday.