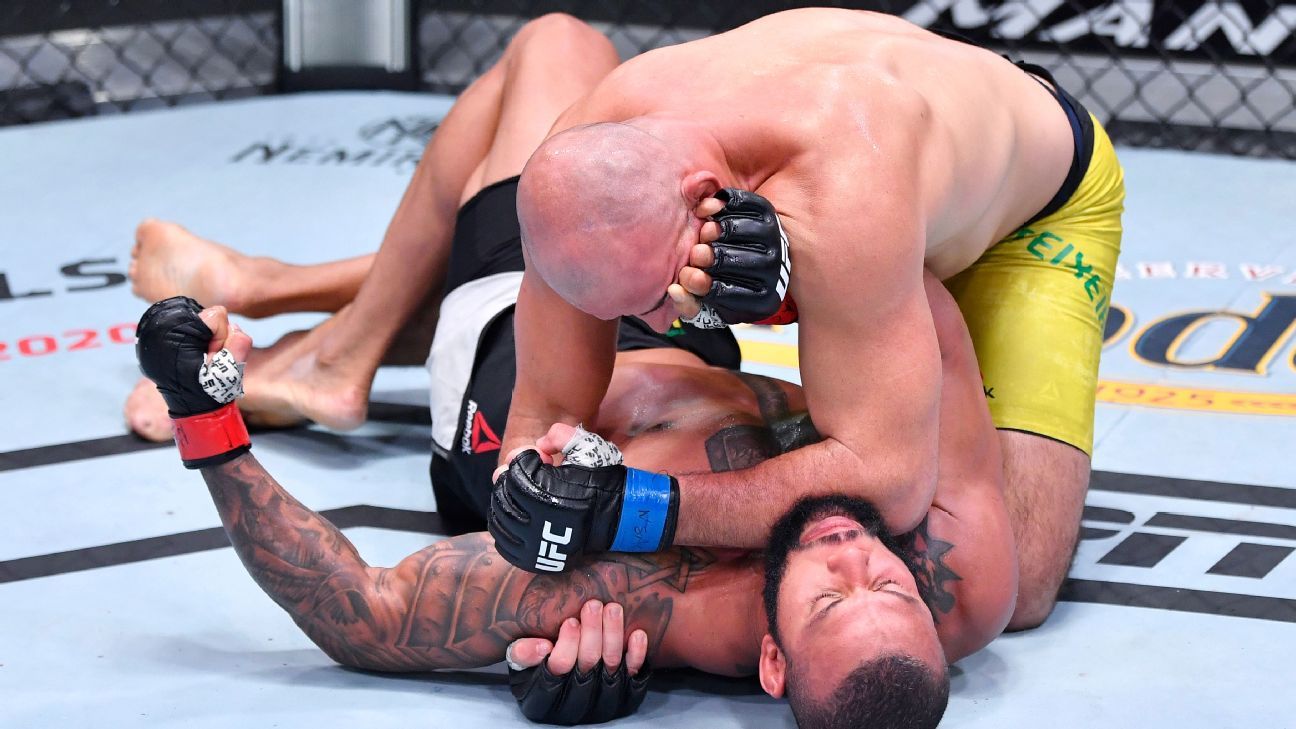 Glover Teixeira is on the wrong side of 40 years old. He hasn’t fought for a title in more than five years. Yet, one of the most durable veterans in UFC history continues to put up victories against elite light heavyweights.

Teixeira submitted Thiago Santos via rear-naked choke at 1:49 of the third round Saturday in the main event of UFC Fight Night in Las Vegas.

Santos rocked Teixeira in the first round and put Teixeira in big trouble to start the third. But Teixeira, as he has done time and again, persevered and found the finish.

The victory puts Teixeira, six years following his last title shot, close to another chance at the 205-pound belt. ESPN had Santos ranked No. 4 and Teixeira No. 6 in the world at light heavyweight coming in.

“Dana White, man,” Teixeira said, referring to the UFC president, in his post-fight interview. “Come on, man. I’m an old man. I’m here. You’ve gotta give me a shot. … It’s not easy. Give me that title shot, man. Either way, I’m so happy to be here.”

Santos rocked Teixeira near the start of the first round with hard punching combinations. It looked like the bout could be over quickly. But Teixeira, always known for his comebacks, was able to get Santos into a clinch and take him down. Teixeira remained on top for most of the rest of the round, landing ground-and-pound strikes, including from mount.

Teixeira didn’t mess around in the second round. He took Santos down immediately and started working his grappling and strikes from top position. It was a dominant round for the elder Teixeira, schooling the younger man with his ground techniques. Teixeira, at the end of the second, was able to take Santos down and lock in a choke, but Santos was saved by the bell.

In an attempted repeat of the second, Teixeira shot in right away for a takedown to start the third round. Santos saw it coming and walloped Teixeira with a combination, dropping him. Santos got into top position and started raining down hard punches and elbows.

“His nickname is ‘Sledgehammer,'” Teixeira said. “Thiago ‘Sledgehammer’ — ‘Marreta’ [in Portuguese]. Let me tell you, every punch this guy throws is like a sledgehammer. I don’t know, man. I might have a broken bone in my face right now.”

Somehow, Teixeira survived, worked his way back to his feet and took Santos down again. After all the effort looking to finish Teixeira, Santos was clearly tired, and Teixeira took advantage, slipping to Santos’ back and finishing with a rear-naked choke.

The card took place in front of no fans at the UFC Apex, which is across the street from the UFC’s corporate campus.

Teixeira (32-7) has won five straight. The Brazil native, who lives and trains in Connecticut, fought longtime former champion Jon Jones for the title way back at UFC 172 in April 2014. Teixeira, 41, is 10-4 since then and has been considered one of the best light heavyweights in the world now for the better part of a decade. Teixeira cashed as a +200 underdog.

In UFC light heavyweight history, Teixeira is now tied for second in most victories (15) and is first in most finishes (12).

Santos (21-8) had not fought since a split-decision loss to Jones in a title fight at UFC 239 in July 2019. The Brazilian slugger needed surgery on both knees after that close defeat. Santos, 36, already owns a TKO victory over current champion Jan Blachowicz. “Marreta” had won eight of his last 10 fights coming in.