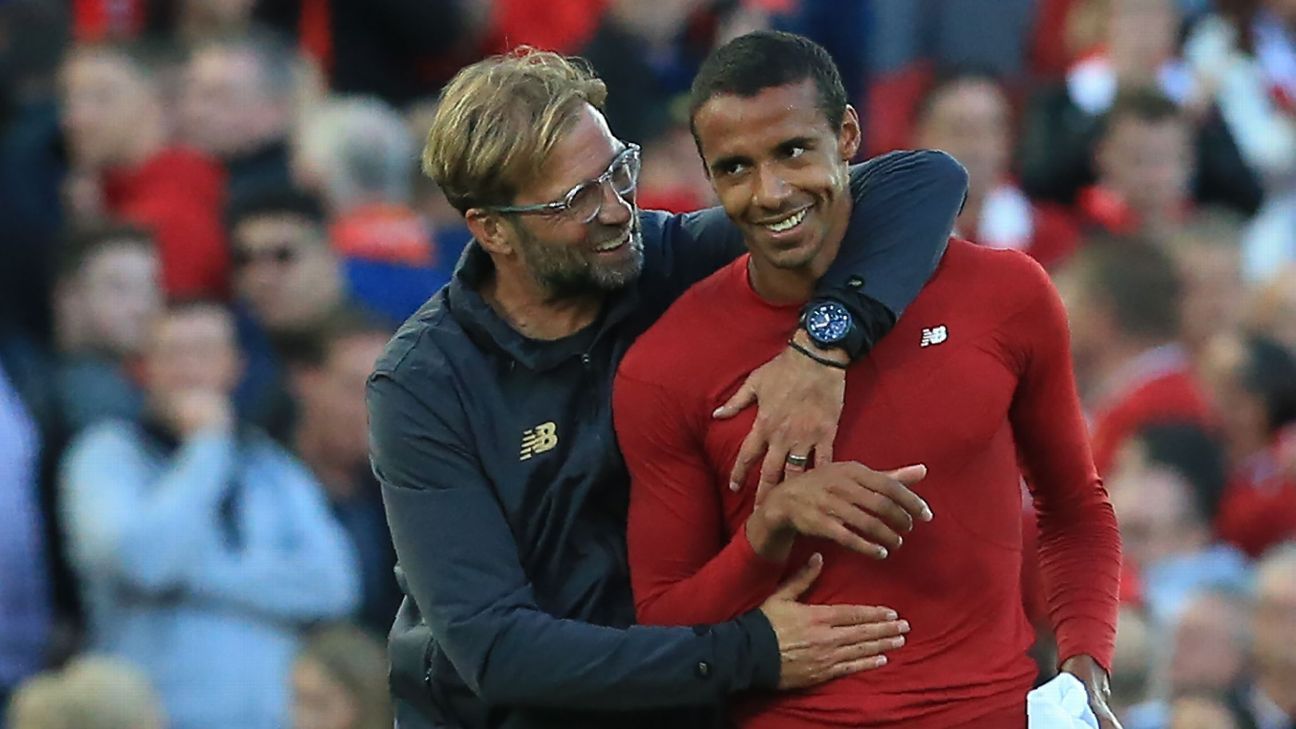 This weekend’s marquee game in the Premier League sees the best two teams in England and the winners of the past three titles, Liverpool and Manchester City, square off at the Etihad. It’s their first meeting since City’s 4-0 win over the Reds on July 2, a result that came a week after Liverpool had clinched their first league title in 30 years.

This Sunday’s clash has a slightly different tone. Neither side has looked imperious in the early part of the new season — Aston Villa 7-2 Liverpool and Man City 2-5 Leicester City, anyone? — and given the lack of a proper preseason break combined with the rush of games in many different competitions, the injuries and squad issues are piling up.

Jurgen Klopp has been forced to rotate several players through his central defense in light of Virgil van Dijk‘s season-ending injury, while Liverpool’s midfield has been taxed due to Thiago Alcantara, Fabinho, Alex Oxlade-Chamberlain and Naby Keita dealing with various ailments (and positive COVID-19 tests) since the start of October.

As for City, manager Pep Guardiola has been able to call on Sergio Aguero and Gabriel Jesus just three times combined in the Premier League due to persistent muscle injuries. The shortage at center-forward has had a knock-on effect to a usually devastating attack: With just one goal from the duo in league play, their top scorers in the PL right now are … Phil Foden and Raheem Sterling, with two apiece.

We’re barely one-sixth of the way through the 38-game campaign, so every option is still on the table, but the vulnerabilities shown by the presumptive front-runners will give their rivals plenty of motivation to keep winning and keep applying pressure.

So how are Man City and Liverpool going to cope in the long term? City’s issues are a little less severe as Aguero should return soon and Jesus is fit, but it’s clear they need a Plan B in the event of further issues. As for Liverpool, they have a long time (and a lot of games) before they can dive into the transfer market on Jan. 1.

Here’s what they could do on Sunday and how they could manage heading through a busy winter.

Liverpool‘s defense: plenty of options with plenty of pros/cons

Much was rightfully made of Van Dijk’s significant injury, sustained very early in the recent Merseyside Derby in a clash with Everton‘s Jordan Pickford. This is the end of their title hopes was the prevailing analysis, and it’s hard to disagree with the scale of the Reds’ loss.

Van Dijk was literally, figuratively and emotionally the core of their Champions League win in 2018-19 and their first league title in 30 years. He also anchored one of the tightest defenses in the modern era. Without him, they’ve already seen an uptick in xG per shot conceded (0.138 since Van Dijk went down, compared to 0.119 xG/shot from 2018 until his injury), and while that difference might only translate to some 5-8 goals per season, those goals can flip some of their 1-0 wins to draws and some of the score draws into defeats. Given the narrow margin for error at the top, those points matter.

That said, all is not lost. Joel Matip‘s return to fitness couldn’t come at a better time. He should slot in alongside Joe Gomez to form a reasonable pair, especially with Alisson Becker in goal and the usual Andy Robertson/Trent Alexander-Arnold double act in the full-back positions. Matip does not have the cleanest fitness record, granted — he played just nine Premier League games last term due to a long-term knee injury of his own — but he has a pretty good record whenever he’s in the Liverpool XI: his last league defeat as a starter was a 1-0 loss at Swansea City on Jan. 22, 2018, with a remarkable 2.25 points per game over 87 career starts since he joined the club in 2016 on a free transfer. Not bad business.

The other option at CB from the existing first-team squad is Fabinho, though he will not be match-fit again until after the international break. His forays as a makeshift defender, instead of his usual role as the holding midfielder/deep-lying playmaker, have been memorable: All three of his center-back shifts in the league were Liverpool wins, including an impressive effort earlier this season against Timo Werner and Chelsea, in which the Reds won 2-0 and limited the Blues to seven shots.

While his leadership skills are perhaps closest in the squad to what Van Dijk offers, he lacks the aerial dominance of the Dutch international and also has a little less passing range from that deep; Van Dijk’s raking diagonal passes are another unique element to his game. Keeping him in defense only serves to weaken Liverpool’s midfield and thus opens up a different set of problems, though he has shown a neat rapport with Gomez as well as a fairly complementary set of skills in reading the play and also anticipating attacks coming their way.

Beyond the senior squad, there are youth options capable of the occasional shift. Rhys Williams, 19, and Nathaniel Phillips, 23, have both been handed starts in different competitions since Van Dijk’s injury given the flurry of games and the need to manage minutes carefully.

Williams was a natural pick for the 7-2 win over Lincoln City in the EFL Cup back in September, but he also played the full 90 of Tuesday’s 5-0 rout of Atalanta in the Champions League, looking assured in another emphatic win. He has been quietly impressive in a difficult situation, but he is still developing his voice and his confidence at the heart of a demanding defense. His reading of the game and positioning are just what the Reds need, but it could be a case of too much, too soon if relied upon consistently.

Phillips, meanwhile, was earmarked for another loan move this summer but stuck around and worked his way into the match-day squad for the Oct. 24 league win over Sheffield United, then starting in the 2-1 home win over West Ham last weekend. After a fortuitous early goal, West Ham were limited to just four shots over the last 75 minutes of Saturday’s clash. That said, the 23-year-old is still not considered a reliable option, with Williams favored in a spot-start role as both Matip and Fabinho inch towards fitness.

Matip will be the long-term partner for Joe Gomez, with Fabinho or Williams deputizing from Matip as needed. That said, when the January window opens, it could see Liverpool be decisive in making signings to try and maximize on a squad that’s very much built to win now.

Guardiola’s prematch news conference had a solid update on Aguero, noting that while the Argentine striker is nearing full fitness, he wouldn’t be available to face the Reds on Sunday. Gabriel Jesus is fit again and, honestly, the data’s pretty generous to the young Brazilian whenever he lines up as City’s No. 9:

The numbers are close, and obviously there’s some overlap in the above breakdowns, but the story is that Aguero’s absence hasn’t hurt too much, overall, and that Jesus is capable of carrying the load if Aguero isn’t fit.

Therefore, Guardiola doesn’t need to change much. He can simply continue to rotate players through the “false nine” or central striker role until either or both are available for selection. Ferran Torres and Sterling have spelled at center-forward this season, with mixed results — Torres’ Champions League form, with three goals in three games, has been an asset — though academy products given an early chance, such as Liam Delap, have underwhelmed.

Lineups so far suggest Guardiola is more inclined to keep rotating his wingers/attacking midfielders in the Aguero/Jesus spot if the pair are unavailable. It’s true to say that City’s attack has regressed from its astronomical levels in the past two to three seasons, but there are a lot of games left in which to course correct.