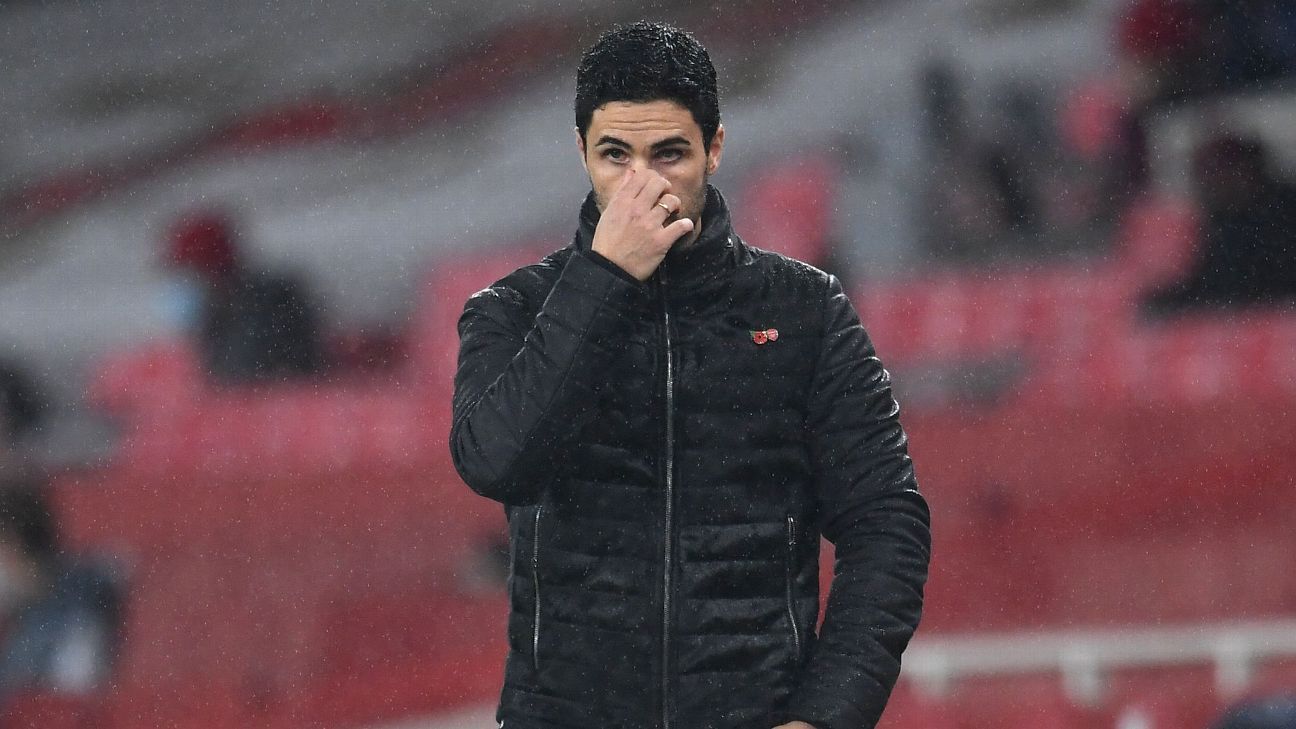 Arsenal were crying out for the structure and stability Mikel Arteta has brought to the team, but nights like Sunday with a crushing 3-0 defeat to Aston Villaunderline why they will need more to succeed in the long run.

It is just a week since the Spaniard was widely praised for facilitating a performance of tactical discipline and measured execution in beating Manchester United 1-0 at Old Trafford. That victory felt like a landmark moment for the Gunners — literally so, given they had not won a League game at United for 14 years — building on last season’s FA Cup success when they beat Manchester City and Chelsea en route to a maiden trophy under their first-year manager.

While there was so much to like about Arsenal’s resilience and conviction in those matches, each win required the Gunners to supplement their level of control with a clinical touch in the final third. Against United, Arsenal registered two shots on target and scored from a penalty. Against City in the semifinal, they had four shots in the whole match and scored twice. Against Chelsea in the final, they had three shots on target and scored twice.

The Gunners were rightly lauded for their efficiency in front of goal but there is a growing sense Arsenal’s forwards simply have to be that deadly given the lack of creativity in their general play, especially when they defend as porously as this.

Arteta pulled no punches in his assessment. “I don’t feel like we were the team we are supposed to be,” said the Gunners manager.

“We performed below our standards, our ability, and I didn’t see the spirit for the first time since I am here that I see every day in training and I see every day when we compete.

“And this is totally my fault because it is why I am here, I am responsible for that, to make sure the team performs and competes at the highest level every three days. Today I haven’t managed to do that.”

Arteta spends each game talking his players through almost every passage of play: when to press, who to mark, who to pass to, where to run. Anyone who watched the calamitous end to Arsene Wenger and Unai Emery’s tenures will appreciate the constant cajoling of a team that so regularly switched off or allowed ill-discipline to creep into their play.

And Arteta could argue they still caused enough problems to get something here, even after surviving John McGinn‘s first-minute goal, ruled out upon a lengthy VAR review by referee Martin Atkinson with Ross Barkley ruled offside for impeding Bernd Leno as the Villa midfielder thrashed a shot at goal.

Thomas Partey almost latched onto a McGinn back pass to score his first Arsenal goal, only for goalkeeper Emiliano Martinez, marking his return to Emirates Stadium following a £20million summer move to Villa, to rush off his line smartly to scramble the ball clear.

Villa’s opening goal was sublime in its mixture of patience and execution. Barkley and Jack Grealish probed for an opening eventually created for Matt Targett to cross to the back post, where Bukayo Saka turned the ball into his own net under pressure from Trezeguet. Alexandre Lacazette then wasted a glorious chance to equalise when heading over from seven yards out just before half-time and after the interval, Willian shanked a left-foot effort way wide when well placed inside the box.

But from there, Villa took control as Barkley, Grealish and Ollie Watkins exhibited a freedom of expression and interchanging of positions which contrasted starkly with the flat Arsenal triumvirate of Lacazette, Willian and Pierre-Emerick Aubameyang. For the record, Villa totalled six shots on target and should really have had more than the three goals they left with. Watkins got both their second-half efforts, the first a wonderfully worked move involving a raking Douglas Luiz pass and Barkley’s sublime volleyed cross, the second a smart finish on the counter after a perfectly-timed Grealish’s through ball.

It is a month since Arsenal scored a Premier League goal which wasn’t a penalty. That is partly due to individual form. Willian has got steadily worse since shining on his debut at Fulham in August — this probably his worst performance in an Arsenal shirt. Lacazette has never been strong in the air but he is palpably lacking confidence in front of goal having not scored in any competition since Sept. 28 while the suspicion remains his deputy, Eddie Nketiah, is not quite ready for the sharp end of Premier League football.

Yet, there are bigger issues at hand. Aubameyang continues to look peripheral playing off the left in a team this regimented and while it was a fact under Emery that if the Gabon international was off form, so were his team, the same looks alarmingly true under Arteta. Villa are sixth in the table and have a game in hand on those above them but Arsenal electing to play effectively a back five at home surely afforded them too much respect.

The early signs are Arteta is not the type of manager to rip up his blueprint overnight but tweaks may be required. The calls for Aubameyang to play through the middle will only grow after this. He has managed just 10 shots on target in eight League games this season and this contest served as the first time he has played 90 minutes in a League home game without attempting a single shot.

“That’s a team function and a collective thing that we have to do more,” said Arteta. “We certainly are getting in some situations but the end product is something we have to improve. About his position, his movement, and where we can find him, of course, we can talk about ‘is this the right or the wrong place for him.’

“But when things were working and he was scoring, that debate wasn’t there. What is certain is that with these numbers, scoring this amount of goals, it is impossible to be fighting with the top teams so we have to maintain the numbers that we had defensively in our organisation and for sure we have to improve our numbers attacking-wise if we want to be challenging there. You want to be consistent winning football matches, for sure.”

Equally, demands will grow for club-record £72 million signing Nicolas Pepe to have longer to impact important matches than his 25-minute cameo here. Mesut Ozil’s omission will also rumble on as an unwanted subplot.

Arteta has made positive strides moulding this team in his own image as he approaches the first anniversary of taking charge. But, as yet, the picture is far from perfect.