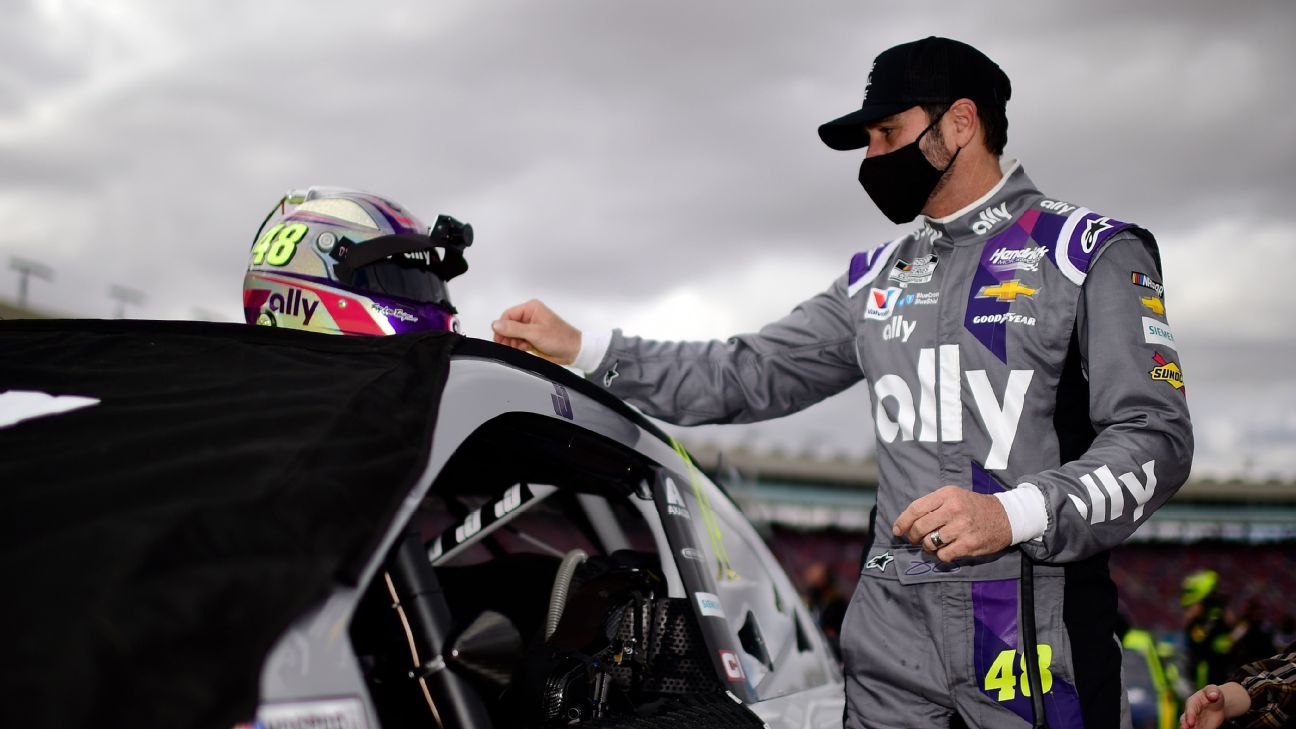 Jimmie Johnson strode into the final news conference of his NASCAR career wearing a black hat with “One Final Shot” on the front.

Told he was the first driver in the room after Sunday’s NASCAR race at Phoenix Raceway, the seven-time Cup champion had a quick response. “I won something this year,” he said.

Johnson closed out one of the greatest careers in NASCAR history by finishing fifth at Phoenix — first among the drivers not in the Cup playoffs. The 45-year-old spent some of the final moments in his No. 48 car pumping his fist and shouting through the window at Hendrick Motorsports teammate Chase Elliott after the 24-year-old won his first Cup championship.

After his final news conference, Johnson tossed cans of beer to his crew and toasted former crew chief Chad Knaus back out on the track. A solid finish to a stellar career.

“It was nice to be competitive out there, but my bucket’s full,” Johnson said. “NASCAR has been so wonderful for me. This journey has been more than I could have dreamed of or expected. Last couple years weren’t as I would have dreamed up, but I’ve experienced the highest of highs and worked with the greatest of people.”

Johnson announced last year this would be his final NASCAR season so he could spend more time with family, run a partial IndyCar season next year and pursue other ways to keep the adrenaline flowing.

Knaus also ran his final race Sunday — he’s moving to an executive role with Hendrick Motorsports — as did Clint Bowyer, who finished 24th. Bowyer is headed to the Fox Sports booth after 15 full Cup seasons and 10 career wins. A former Xfinity Series champion, he won races for Chevrolet, Toyota and then Ford after replacing Hall of Famer Tony Stewart in the No. 14 when he retired in 2016. A solid career, just not like Johnson’s.

Johnson and Knaus teamed up to dominate NASCAR for more than a decade in the No. 48, pulling in a record-tying seven championships, including a staggering stretch of five straight. Hall of Famers Richard Petty and Dale Earnhardt were the only other drivers to win seven championships.

Labeled boring early in his career, Johnson proved to be anything but, becoming a popular pitchman, fan favorite and one of the most well-liked drivers on the circuit. When Johnson’s final race was over, the respect was evident as crew members from every team lined the wall to high-five him before he rides off into the sunset.

Johnson clinched his final title in 2016 and won his last race the following year, putting his career-ending winless streak at three years after Sunday’s race at Phoenix. He failed to reach the playoffs his final season in part because of a positive COVID-19 test in June that caused him to miss the first of his 685 Cup races.

Johnson led 103 combined laps in 36 races this season — none at Phoenix. He started 26th in his career finale and gradually worked his way toward the front at a track where he’s won four times. Johnson cracked the top 10 after about 100 laps and was third after around 140 laps before a round of green-flag pit stops dropped him to ninth. He rallied to finish fifth for his ninth top-10 of his final season and his first since Dover in August.

“It definitely feels good to run well in my final race here,” Johnson said. “I’ve got a tent full of family and friends back there. I didn’t have too much riding on making sure I had a good run here, because I always plan to run well in my head; I always feel like I should.”

He almost always did, a big reason Johnson will go down as one of the greatest drivers in NASCAR history.