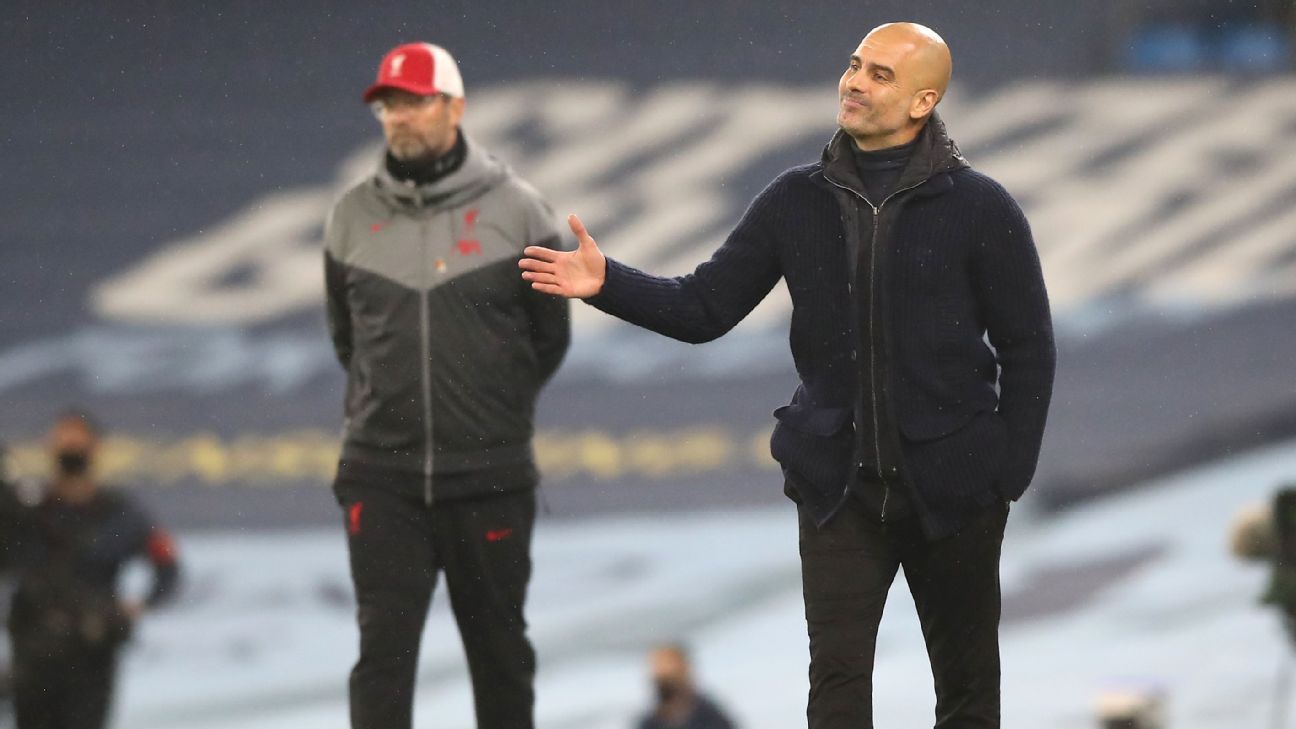 MANCHESTER, England — After 90 minutes between the Premier League’s best two teams there was no clear winner, and if anything, Manchester City‘s 1-1 draw with Liverpool served as more evidence that this season’s title race is open to anyone. After a weekend that saw Southampton, Tottenham and Leicester all lead the table at one time or another, stalemate at the Etihad Stadium reminded the chasing pack that this year they have a chance.

Liverpool remain within touching distance of the top but whether they will be there at the end depends largely on how quickly they can start keeping clean sheets. City, meanwhile, will rue Kevin De Bruyne‘s missed penalty at the end of the first half, leaving Pep Guardiola answering more questions about why his team are not scoring more goals.

Liverpool, without Virgil van Dijk, are conceding too many and City, without Sergio Aguero, are not scoring enough. Make no mistake, these are still England’s best two teams and whoever solves their issue first will be favourites for the title.

Perhaps crucially, Aguero is expected back after the international while Liverpool will have to cope without Van Dijk for many months yet. Remember, City could not cope when they lost Aymeric Laporte to injury last season.

The one problem they have got in common is the schedule and it was noticeable that after an entertaining first half, the quality dropped after the break at the end of a long week that included Champions League commitments.

“I actually like the whole game but the start was probably the best period,” said Jurgen Klopp.

“That is how football is. Especially against City you have to use your chances or create even more. For the football we played in that period we didn’t have enough. You just have to stay in the game. The energy level of both teams, it was a proper fight on the highest level.”

Guardiola was also keen to take the positives rather than focus on what his team lacked. “After the goal we conceded, we were much better,” said Guardiola.

“We equalise and the second half was much better. Not many chances. It speaks well for both sides.

“Every team wants three points but one point is one point. We played seven games and we lost one. Unfortunately, we draw too much but in general I think it is a fair result.”

After a week of debate about whether it should be Roberto Firmino or Diogo Jota, Klopp flexed his entire arsenal and picked everyone from the start — Firmino, Jota, Sadio Mane and Mohamed Salah. Liverpool started quickly but at the moment they do not win league games unless they score more than once and that’s all they managed on a damp, drizzly Sunday evening at the Etihad.

They have kept just one clean sheet in the league this season and that was back in September against a Chelsea team who played with 10 men for 45 minutes. Keeping them out has not been a problem in the Champions League, but in the Premier League their defensive record puts them in the same bracket as strugglers Fulham and West Brom.

Gabriel Jesus‘ equalizer, after a Salah penalty had given the visitors the lead, was the 16th goal they have conceded in eight games. You have to go back to the 1960s to find a Liverpool defence that had conceded more by this stage of the season. If Van Dijk’s injury is not bad enough, Klopp watched Trent Alexander-Arnold limp off during the second half here.

City, however, exposed their own frailty by failing to take advantage. They have not scored multiple goals in a league game since the 5-2 defeat to Leicester in September and have managed it only twice all season. De Bruyne’s penalty miss aside, both Raheem Sterling and Jesus had good chances to score and Guardiola will hope he does not look back on this game as a missed opportunity when the trophy is being handed over in May.

Perhaps even more worrying for Guardiola is a lack of creativity after watching his team register just two shots on target. There is a heavy burden on De Bruyne to inject the artistry but when he is on the periphery, as he was in the second half, City have a tendency to drift through spells of the game. That killer instinct Guardiola’s teams are famous for seems to be missing in this 2020-21 City team.

Both managers can point to the hectic schedule as reasons why their teams are not reaching their thrilling best, as well as the Premier League’s refusal to allow five substitutions. That the best teams are already tiring in November will give more hope to the managers who are not worrying about European football.

“The only problem is we injure the players,” said Klopp. “It is not about us. It is about the players. We have to talk again about the five subs. “Trent will be out for England. What he has, we don’t know. It will not be the only one Gareth [Southgate] has lost.”

Guardiola added his voice, saying: “Today the right-back for the national team of England is injured so it’s another player. It’s so demanding for the players. All around the world it is a completely different situation.

“All the leagues in the world except this one which likes to be different have five. Playing every three days, the situation is different, it is unusual. It is not to take advantage, it is to protect the players.”

In a title race with no clear favourite, it will come down to who can deal with their problems best.