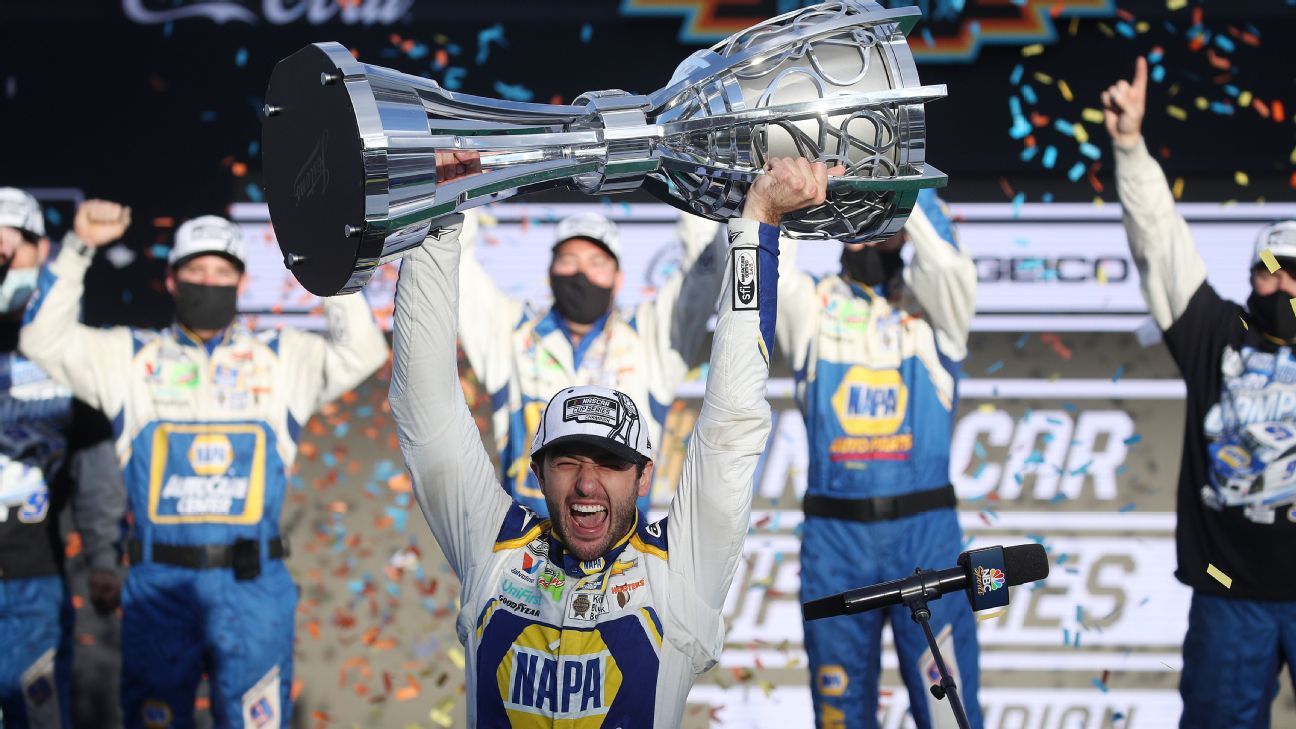 Sunday evening at Phoenix Raceway, the coronation of Chase Elliott became official. The promise that became the potential finally resulted in the payoff. The kid is still a couple of weeks shy of his 25th birthday, but to longtime NASCAR fans he feels so much older than that. They have known him for nearly every single day of his life.

They first learned of his birth via press release, the son of the legend Bill Elliott, born just two weeks after his father led 17 laps and ran fourth behind champion Dale Earnhardt at the family’s home racetrack, Atlanta Motor Speedway. The following February, infant Chase was carried on his father’s hip as they strolled to Awesome Bill’s Ford Thunderbird on the grid of the Daytona 500.

We watched little Chase toddle through the Cup Series garage holding his father’s hand. We saw him sitting in the laps of Earnhardt, Rusty Wallace and other stock car racing demigods whom the rest of us had to stand in line to meet. We watched him on television, snowboarding in Colorado in the tracks of his dad nearly as soon as he could walk. We saw him featured in Sports Illustrated, alongside golfer Jordan Spieth as the can’t-miss future stars of their sports. He was 13.

They say that as your kids grow older their bodies and faces change, but their eyes do not. When you look into your child’s eyes, the frame around them might be different, but what’s looking back at you is still the same. Perhaps that’s why so many people were caught off guard by their emotions when NBC’s in-car cameras captured Chase Elliott’s eyes watering with tears, so much so that he had to flip up his visor to dry them with his gloves. When he did that, there in high definition were those eyes so many race fans have peered into for so long.

Heck, even his father, who spent most of his NASCAR Hall of Fame career showing the emotional spectrum of a city park statue, was whooping and jumping up and down on pit road after his son clinched the Cup.

“I just think about all of the people who worked so hard to get me to this point today,” Chase Elliott said Sunday night, after holding off a late charge from Joey Logano to earn his 11th career race win and first championship. “I think about my family, all of the crew members who built all of those race cars for me, Rick Hendrick for hiring me. Jimmie Johnson, who ran his last race tonight, and Jeff Gordon, both of whom took me under their wings as teammates and mentors. There were a lot of people who supported me. Even when there were a lot of people who didn’t.”

Yes, there have always been plenty of those, too. Even for the son of a beloved NASCAR legend. Bill Elliott won 44 races, the 1988 NASCAR title, and was voted Most Popular Driver an astonishing 16 times. But being the kid of a legend comes with nonstop criticism, no matter the sport. In racing, that noise is as loud as the race cars themselves, a “silver spoon” perception that those drivers haven’t actually earned the equipment they wheel, the jobs they land or the sponsorships that paid for all of the above.

Chase Elliott has spent his life shrugging off those critiques publicly, but privately they have always eaten at him. That’s why he has always been so serious, even from a very young age, stressed out by self-inflicted pressure. When his career started 0-for-98 in his quest for a first Cup Series race win, it wore on him emotionally. Even when he started winning regularly — three victories each in 2018 and 2019, only his third and fourth full-time seasons — he lost sleep during the offseason over his failure to make it to the season’s final race as one of the four title contenders.

“For me, it’s always been a fear of letting people down,” he confessed at Daytona in February, on the eve of a Daytona 500 where he led 23 laps but finished 17th. “I think because of my name and my dad, two things I am so proud of, the bar has always been so high in people’s minds. But my bar has always been higher than that. All of that is why my friends and family seem to always be reminding to me to enjoy it all a little more than I have.”

The most vocal preacher of that sermon has always been his father. Bill Elliott always looked pretty miserable at the racetrack, even at the height of his powers in the 1980s. He famously hid beneath his race car to avoid reporters when he was racing for the uber-hyped Winston Million dollar bonus at Darlington in 1985. After winning his Cup title three years later, he declared to photographers at the Winston Cup Awards in New York, “The good news is that tomorrow morning y’all can’t follow me home to Dawsonville [Georgia]!”

But that very year, he met his future wife, Cindy, who was one of those photographers. They married in 1992. When they had Chase, suddenly stoic, old Awesome Bill from Dawsonville couldn’t stop smiling. Now it’s the dad’s job to remind his son to do the same, a task he took very seriously over the days leading into the Phoenix season finale.

“Me, I’ve been a nervous wreck,” Bill Elliott, 65, said Sunday night. He was speaking of his son’s need to win at Martinsville Speedway one week ago simply to make it into the Championship 4, and then the title bout itself. “But I reminded him all week long to enjoy his self. All we want as race car drivers is to put ourselves in a position to win a championship. He did that. So, I reminded him to enjoy it. Don’t be so worried that you don’t enjoy it. I wish someone had told me that when I was driving.”

Chase Elliott was appreciative of his father’s efforts to keep things on the lighter side leading into the finale.

“He told me, ‘Man, all you have to do is beat three other guys, how hard is that?!'” the son recalled of his father’s weeklong drive toward lighthearted advice. “He worked hard to keep me loose. I appreciated that so much. Just now, when I got out of the car and he hugged me for the first time, that’s what he kept screaming. ‘I told you that you could do it!’ And he was right. I think his advice all week worked out pretty well.”

Yes, it did. Now the Elliotts are only the third father-son duo to both become NASCAR Cup Series champions, joining Lee and Richard Petty and Ned and Dale Jarrett, all of whom are alongside Bill Elliott in the NASCAR Hall of Fame. Chase Elliott is the third-youngest champion in NASCAR’s 72-year history and its youngest since Gordon in 1996.

“The sky is the limit for Chase,” Johnson said after taking time from his own postrace celebration of a career to congratulate his Hendrick Motorsports teammate, two decades his junior. The seven-time Cup champion finished fifth in his final event as a full-time NASCAR racer, just behind the Championship 4.

“When I came along, there were zero expectations of me. Chase has had these impossible expectations from others since the day he was born. But he’s never backed down from that challenge. The reality is that he is an insanely talented race car driver. Sponsors and opportunities and even your last name, none of that drives the race car. The person behind the wheel does. And he’s a wheelman.”

In May 2010, I stood with a group of people on a viewing platform that overlooked Turn 3 at just-reopened Rockingham Speedway. We watched the youngsters and veterans alike of the USAR Pro Cup Series try to manhandle their machines, careening out of control as they entered the infamous sandblasted, rock-filled treacherous corner. One by one the cars slid sideways and slapped the outside retaining wall. Except for one. The No. 9 Ford kept diamond-cutting the turn without so much as a tire squeal, launching itself into Turn 4 and rocketing out of sight down the frontstretch.

It was being driven by 14-year-old Chase Elliott.

I was on that platform with Bobby Allison, the NASCAR Hall of Famer who competed against Chase’s father and himself begat a pair of race car-driving sons. Allison grabbed my shoulder, pointed into the turn below and laughed. “You know who teaches someone how to drive like that?”

“Hell no,” Bobby Allison said, laughing. “Only God can teach you how to drive like that. When you’re born, you can either do that or you can’t. One day that kid will be a champion.”

That day is today.