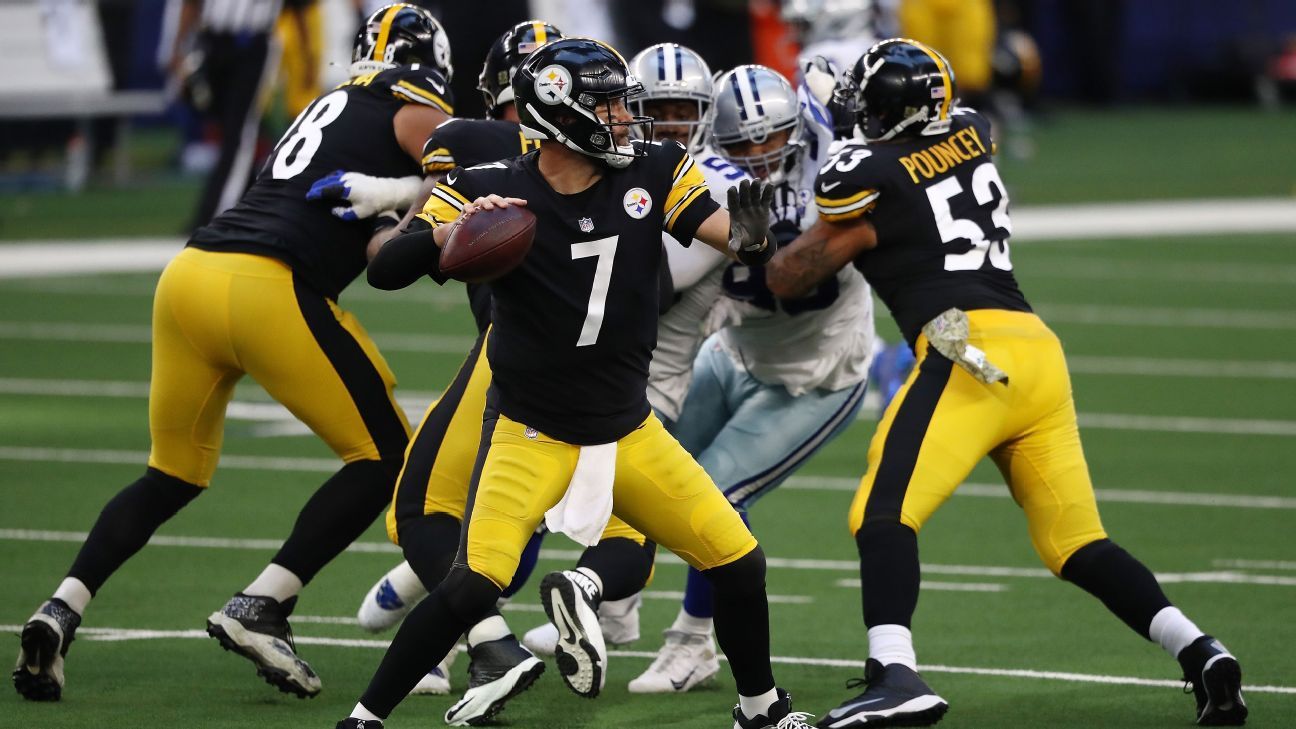 Who else but Minkah Fitzpatrick?

For the second week in a row, Fitzpatrick knocked away a pass in the end zone to preserve the Pittsburgh Steelers‘ undefeated season.

This time, he kept Garrett Gilbert‘s pass from finding CeeDee Lamb to help the Steelers hold on to a 24-19 win against a pesky Dallas Cowboys team (2-7) at AT&T Stadium.

With the win, the Steelers moved to 8-0 for the first time in franchise history, surpassing the 7-0 mark set by the 1978 team.

Though the Steelers pulled out the win, the game was far from pretty.

A 14-point favorite, the Steelers trailed by as many as 13, the team’s largest deficit of the season, according to ESPN Stats & Information research.

Hit by Neville Gallimore and DeMarcus Lawrence late in the second half, Roethlisberger’s afternoon almost ended early. The quarterback tossed four passes after the hit, ending with a touchdown toss to James Washington for the Steelers’ first score of the game. But he left the field immediately afterward, going to the locker room with a minute and 10 seconds left in the half to evaluate a left knee injury. When the Steelers got the ball back on a recovered fumble, Mason Rudolph had to come on for the final drive, one that ended with a franchise-record 59-yard field goal by Chris Boswell.

Without Tyson Alualu, the Steelers struggled mightily to stop the run. A week after giving up 265 rushing yards to the Baltimore Ravens, the Steelers allowed the Cowboys to rack up 144 yards. Even with Ezekiel Elliott slowed by a hamstring injury sustained a week earlier, the Cowboys averaged 4.6 yards per carry thanks to him and backup Tony Pollard.

The Steelers were also sliced up by Gilbert, the Cowboys’ third starting quarterback this season. He completed 21 of 31 passes for 243 yards with one touchdown and one interception. The Cowboys also stayed ahead of the Steelers with four field goals by Greg Zuerlein.

And on the opposite side, facing the league’s worst rushing defense, the Steelers had an opportunity to run all over the Cowboys.

Instead, the team put up just 46 rushing yards. The performance comes a week after managing just 48 rushing yards against one of the best rushing defenses.

The Steelers’ discombobulated and stagnant offense started to find a rhythm at the end of the third quarter and managed to score a touchdown on the first play of the fourth on a 31-yard touchdown from Roethlisberger to JuJu Smith-Schuster to pull within four after Boswell missed the extra point.

But the Steelers appeared to be running out of comeback magic as the special teams unit gave up a 64-yard kickoff return to Rico Dowdle — the second highlight-reel return for the Cowboys after C.J. Goodwin‘s 73-yarder. With excellent field position, the Cowboys were on the cusp on another score when Fitzpatrick picked off first-time starter Garrett Gilbert in the end zone on third-and-goal.

Roethlisberger had a chance to orchestrate his first 99-yard scoring drive after Fitzpatrick’s interception in the end zone, but the veteran quarterback had to settle for a field goal instead after his third-down attempt was tipped.

Forcing just the second punt of the afternoon, the Steelers got the ball back with 4:11 to go.

This time, Roethlisberger’s drive ended in the end zone with an eight-yard touchdown to tight end Eric Ebron, who hurdled into the end zone to give the Steelers their first lead of the afternoon.

T.J. Watt and Cam Heyward delivered with a monster sack of Gilbert on 4th-and-8, giving the Steelers the ball with 1:37 to go, but the Steelers still had to make one last defensive stand after the offense couldn’t hang on to the possession for the final minute and a half. Despite Lamb’s 32-yard toe-tap grab with 30 seconds left and one final play from the 23 with four seconds left, the Cowboys couldn’t pull off the upset.