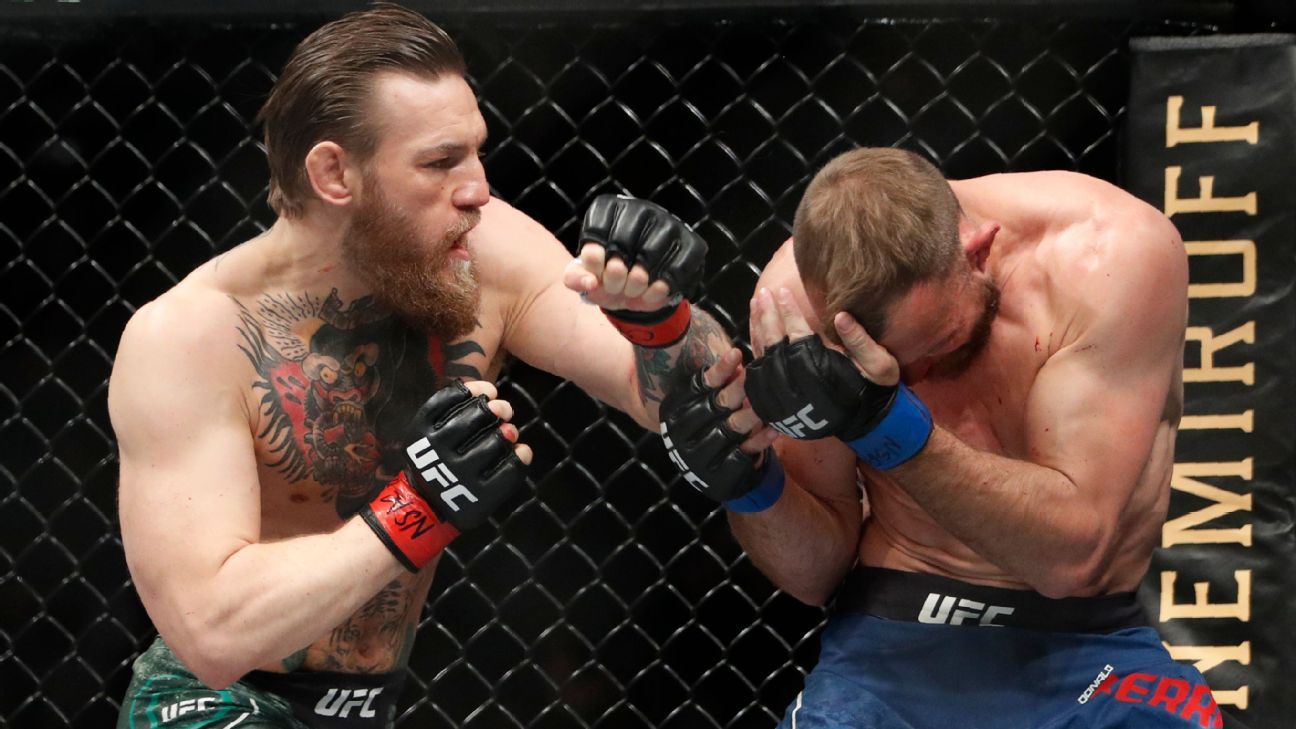 UFC fans are anxiously awaiting Conor McGregor‘s Octagon return, which is expected to be Jan. 23 vs. Dustin Poirier. But until bout agreements are signed, it’s not a done deal, and according to ESPN’s Ariel Helwani, this fight is not yet a done deal.

So what happens if it falls through?

And what’s going on at light heavyweight? Glover Teixeira‘s impressive win over Thiago Santos on Saturday cemented him as the top contender to Jan Blachowicz‘s title, but UFC president Dana White said middleweight champ Israel Adesanya will get the first crack at Blachowicz, although White did say Saturday he understands why Teixeira believes he should get that shot and the UFC will have to think things through. Teixeira, who’s 41 and has won five straight, doesn’t want to wait a year before his next fight, and that might happen if Adesanya beats Blachowicz and then heads back down to middleweight to defend that belt.

The waiting game continues for Islam Makhachev‘s UFC debut after Sunday’s news that an injury is forcing him to pull out of Saturday’s main event vs. Rafael dos Anjos. Lightweight champ Khabib Nurmagomedov believes his friend and teammeate, Makhachev, will some day be a UFC champ. Is he right?

Real or not: Justin Gaethje will end up replacing Poirier vs. McGregor

Dustin Poirier tells Ariel Helwani that he thinks his next fight will be against Conor McGregor, hopefully by the end of 2020.

Helwani: First, let’s establish the fact that the McGregor vs. Poirier fight isn’t a done deal, sources say. Nothing has been signed.

McGregor isn’t the issue, by the way. He’s in and eager to resume his career, I’m told. Now, if you’ve been paying attention, you won’t be surprised to hear that securing Poirier remains a hurdle. He’s the reason the Tony Ferguson-Poirier fight didn’t happen on Oct. 24, and he might be the reason the McGregor-Poirier fight doesn’t happen on Jan. 23. That’s not to say he’s doing anything wrong, per se, rather, he’s just trying to get a deal that he’s comfortable with and the two sides are still apart. That’s the fight biz.

As a result, the UFC has said it would be willing to replace Poirier with Justin Gaethje (or even another fighter), sources say. Of course, for this to happen, McGregor would have to be on board, and I’m not sure if he is, to be honest. That’s because Gaethje is coming off a loss and because of things Gaethje has said about McGregor (specifically about McGregor as a father) in the past.

At this point, McGregor might be Poirier’s biggest ally. If McGregor says he’ll only fight Poirier, the UFC will have to work much harder to figure things out with Poirier. However, if McGregor says he’s open to other options because he just wants to fight, Poirier might be in trouble. Ultimately, I’ll say right now that they figure things out with Poirier and the Jan. 23 fight gets done. That’s just a guess, because this can go sideways at any minute. But, because Poirier will realize this is too big an opportunity to pass up and because McGregor wants it, I’ll say it gets done.

Wagenheim: Hasn’t the UFC learned? The answer to that is no, obviously, after White announced last week that he will skip over his light heavyweight contenders in order to book the middleweight titlist in a bid to add the 205-pound belt. Woo-hoo. Way to stick a wrench in the gears of two weight classes.

Consider the ignoble history of UFC champions reigning in two divisions simultaneously. McGregor became the first to do it back in 2016, and it was an accomplishment suitable for the sport’s biggest star, to be sure. But where did it lead the sport? To stagnancy at both lightweight and featherweight. The 155-pound belt collected dust for 511 days before its next true (non-interim) championship bout, and that was nothing compared to the fate of the 145-pound strap, which went without a title fight for 543 days.

There wasn’t a whole lot more activity at the top during the champ-champ reigns of Henry Cejudo, Daniel Cormier or, to this point, Amanda Nunes. As glittery as a double-belted fashion statement may appear, it slows the machinations of both weight hierarchies to a crawl. Contenders who’ve worked for years to build toward a title shot end up just sitting and waiting endlessly. How shortsighted. How misguided.

“I heard him, I agree with him, and I’m taking him serious.”

On the #UFCVegas13 post show, @danawhite tells @laura_sanko that he heard @gloverteixeira call for a title shot and says “he’s not wrong.” pic.twitter.com/qX3JokLm2r

Now, I’m not suggesting that Adesanya vs. Blachowicz won’t be fun to watch, and yes, I understand the UFC’s desired end game here: to dangle Adesanya and a shiny 205-pound belt in front of Jon Jones in hopes of cashing in on one of the biggest fights in company history.

But Adesanya has just two title defenses under his belt. Blachowicz has zero. This is no superfight in the traditional sense, with two long-reigning champs colliding.

And Adesanya has a legitimate challenger waiting for his shot — ex-champ Robert Whittaker, who has won two fights in a row since Adesanya dethroned him 13 months ago. Blachowicz now has a worthy challenger staring him down as well, as Teixeira looked excellent on Saturday in finishing Santos. And what about Jones’ stated ambition to move to heavyweight and challenge for the title up there?

Is slamming the brakes on two — or even three — weight classes good for MMA in the long run? I say no, no, no.

Real or not: A Deiveson Figueiredo win will make him the 2020 male fighter of the year

Okamoto: It’s a nice thought, and there is definitely a part of me that would love to see a flyweight earn that kind of shine — but truthfully, I can’t sign up for this. If Figueiredo beats Alex Perez at UFC 255, he will have ushered in a new (exciting) chapter of flyweight history, and he’s already finished one of the greatest 125-pound fighters of all time (Joseph Benavidez) twice in 2020, but even those three wins likely wouldn’t be enough to make him fighter of the year.

A lot of this still needs to play out, but Khamzat Chimaev went from a virtual unknown to being a headliner for the final UFC event of 2020 against highly ranked Leon Edwards on Dec. 19. If Chimaev wins that, he will probably be the universal 2020 fighter of the year. One week before that, you’ve got Kevin Holland trying to earn his fifth win of the year — something that’s never been done in UFC middleweight history — and taking a big step up in competition against Jack Hermansson. And you know what? I’ll probably catch some criticism for this one, but Khabib Nurmagomedov … I know he only fought one time, but fighting under the circumstances in which he did, the loss of his father, a broken toe, hospitalization with mumps before the fight — I could make a case for him as fighter of the year, based on that one performance alone against Justin Gaethje.

Real or not: Khabib is right, Makhachev will someday be lightweight champ

Raimondi: As Nurmagomedov likes to say, why not? Makhachev is just 29 years old — three years younger than Nurmagomedov — and has 10 fewer fights. He is just now in his prime and rounding into form. Makhachev has won six straight and shown flashes of brilliance. The one thing missing from his résumé is a win over a big name. He had a chance for one this weekend, but he had to pull out of the UFC Fight Night main event against dos Anjos, the former UFC lightweight champion, with an undisclosed injury.

The plan for the UFC has been to give Makhachev (18-1) a major fight, and he’ll likely get one when he is able to return. Can he be the next member of the stable of fighters guided by Nurmagomedov’s father Abdulmanap’s to earn a title shot? Can he continue the American Kickboxing Academy championship lineage? Will he be able to follow in the footsteps of Nurmagomedov, a man he calls a brother? Those questions will begin to be answered upon his return. Listening to those who know Makhachev best, I’m inclined to believe the answer to all those questions is yes.