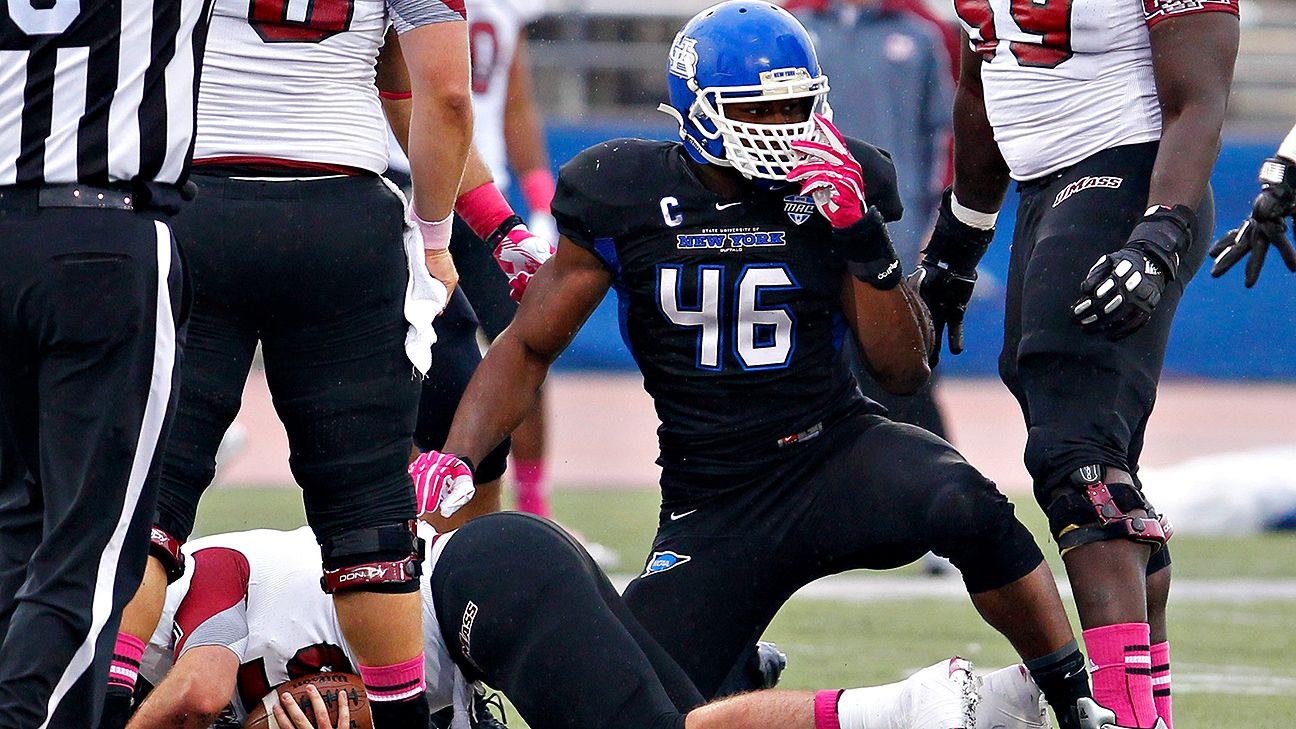 Before Khalil Mack was a Pro Bowl linebacker in the NFL, he was a 2013 first-team All-American, a first-team All-MAC player three times and the 2013 conference Defensive Player of the Year.

Perhaps the most impressive part was that Mack did all of this at Buffalo. Mack, who went from lightly recruited high schooler to best player in Bulls history to fifth overall pick in the 2014 NFL draft, certainly left his mark on the MAC school.

With Buffalo set to host Miami (Ohio) at 8 p.m. ET Tuesday (ESPN/ESPN App), we decided to revisit the best of Mack’s collegiate career.

Mack was the standard at Buffalo. The Bulls had other future NFL players, including Steven Means and Branden Oliver, but Mack was on a different level.

“I remember trying to explain to my high school coaches what I was dealing with [when I first arrived at Buffalo],” former Bulls offensive lineman Jake Silas said. Silas was on the scout team, and Mack, just a redshirt freshman, would make easy work of him.

“I remember coaches being like, ‘Well just block him! What are you doing?’ Just getting yelled at to just block him. I’m like, ‘It’s not that easy!'”

Silas’ favorite memory of Mack was against UMass in 2012, when Mack, using one hand, brought an offensive tackle three feet in the air and parallel to the ground en route to a sack.

“At that point, I thought about the tackle,” Silas said, “And I was like, ‘Yeah, that’s what I felt like for the first half of my career at Buffalo.'”

The levels to Mack’s strength weren’t shocking to anybody who saw him work in the weight room.

“He moved more weight in less time and without being fazed,” former Buffalo linebacker Jake Stockman said. The Bulls worked out in different groups, and Mack participated in the elite group that worked out quicker and with less rest and more weight.

“At the end of those workouts, you could look at that group and they’re hunched over on their knees, dying, looking for a garbage can,” Stockman said. “And Khalil would just have his hands on his hips — breathing heavy — but looking nothing like the other 10 guys in the group, just chillin’.”

Former Buffalo quarterback Joe Licata was lucky enough to only have been hit by Mack once.

“It was during a spring game, and he kind of gently put me down,” Licata said.

“As he tackled me, he helped me back up and said, ‘You’re welcome.’ Because he could have killed me.”

The most impressive thing Mack did in Licata’s eyes, though, was something he couldn’t even see in real time. It wasn’t until Licata went to the film room and saw what he knew he felt.

“It was in practice,” Licata said. “It’s my sophomore year, his senior year. And I just remember stepping up in the pocket and feeling pressure. I got the ball off, but I just remember feeling uncomfortable in the pocket. I go back and I watch the film, and I’m watching it with one of our other quarterbacks in the film room scrolling through, and I noticed that Khalil was one-on-one with our tackle who was 315 pounds, and he one-arm jacked him. He went flying in the air, and he was about to hit me. … As the guy is in midair, Khalil grabs him with one hand and puts him back on the ground, and I threw the football.

“He was a couple rooms over in the linebacker room, and I called him in and was like, ‘What is this!?’ He’s like, ‘Yeah, I just didn’t want him to hit you.'”

The 2013 season was a difficult one for Miami (Ohio). After a couple of years in a pass-heavy offense, the RedHawks moved to an option-based offense, and it went poorly. Head coach Don Treadwell was fired after an 0-5 start, QB/WR coach Mike Bath was given the interim head coach tag and Miami went back to a non-option offense.

To make matters worse, the RedHawks’ starting quarterback tore his ACL two weeks after the coaching change. Four games later, they got to see Khalil Mack. And they saw him often, with redshirt freshman quarterback Austin Gearing getting the closest looks.

“It was shocking, probably, for him at times in that particular game,” Bath said of Gearing.

Mack broke the NCAA record for career forced fumbles in the game. The record-breaking fumble is the one play Bath said he remembers from the entire season.

“He threw our tackle town like a rag doll, and he just lit up young Austin Gearing in the backfield. Put his helmet right in his chest, and he stripped it,” Bath said.

“I remember telling Austin, ‘Hey, that guy is one of the most talented players you’re ever going to play against, period.’ Just trying to encourage him — and encourage a lot of the players because it was such a tough year that year.”

The Bulls’ defense couldn’t even practice many of the things they needed to going into that week because their scout team offense didn’t have anybody that could block Mack. Even when coaches tried to put Mack a few more yards off, he was still getting to the quarterback.

“I just remember it was something that [Miami] had never seen, and Khalil was just salivating, I think, just being off the ball sprinting downhill like a free-for-all,” Stockman said.

Licata remembered certain games during which the offense would come off the field and immediately want to go watch Mack and the defense play.

“You don’t see that guy in the MAC,” Bath said. “You’re gonna get guys that are going to have really nice careers in the National Football League, but you don’t have a defensive NFL MVP in the Mid-American Conference. It’s different.”

Buffalo visited Ohio State for the 2013 season opener and had no fear — because of Mack. That confidence wasn’t just because he was playing for them but because the Bulls felt like they weren’t going up against anybody they could fear more than the guy who was on their own team.

“When you play with Khalil and look at Khalil every day, and then we end up at Tennessee or Ohio State or Georgia … and you’re looking over the line at whoever it is — they just look like Khalil or not even like Khalil,” Licata said. “So for us, there was no intimidation factor of at least size or physically looking at someone because you’re like, ‘Khalil’s bigger than that dude and probably faster.'”

As soon as the Buckeyes got out there, Mewhort said, “Everybody’s aware of him, because it’s like, ‘Who is this guy?’

“And then he starts lining up in pass rush. And that’s when chaos broke loose.”

Mack had nine total tackles and 2.5 sacks in a 40-20 loss, but the one play that stands out was his pick-six of QB Braxton Miller in the second quarter.

Buffalo’s @FiftyDeuce stepped on the national scene in a big way vs. the Buckeyes. Mack finished the game with nine tackles (2.5 TFL’s), 2.5 sacks and this pick six! The rest is history… 🤘@UBFootball | #MACtion pic.twitter.com/Gft5rPxMYy

“We’re in a fast-paced, no-huddle offense, and him and I are lined up against each other,” Mewhort said of Mack. “I throw a cut block, get the defensive end’s hands down, we’re going to throw it quick so we want you to cut the guy. So in the middle of the series I’m like, ‘Yeah, OK, perfect, this will be easy. I can do that; at least I can execute that on this guy.’

“So ball gets snapped, I throw a cut block, and I’m looking and I’m like, ‘Where is this guy?’ I didn’t feel anything. He had stepped back perfect, pushed me to the ground, gets that legendary interception and runs it back for a pick-six. I remember rolling over and looking at him and being like, ‘Wait … he’s like Superman.'”

Mewhort learned that day that Mack — the best football player on the field that game — could do anything he wanted.

One thing all the former Bulls mentioned: Urban Meyer spoke about Mack the Monday leading up to Ohio State’s game against Buffalo, but the Buckeyes coach couldn’t remember Mack’s name and just referred to him by number. It’s something that everybody at Buffalo used as bulletin board material.

“After the game,” Licata said, “Khalil went up to [Meyer] and introduced himself and said, ‘Hey, I just wanted to introduce myself, Coach. I’m Khalil Mack.'”