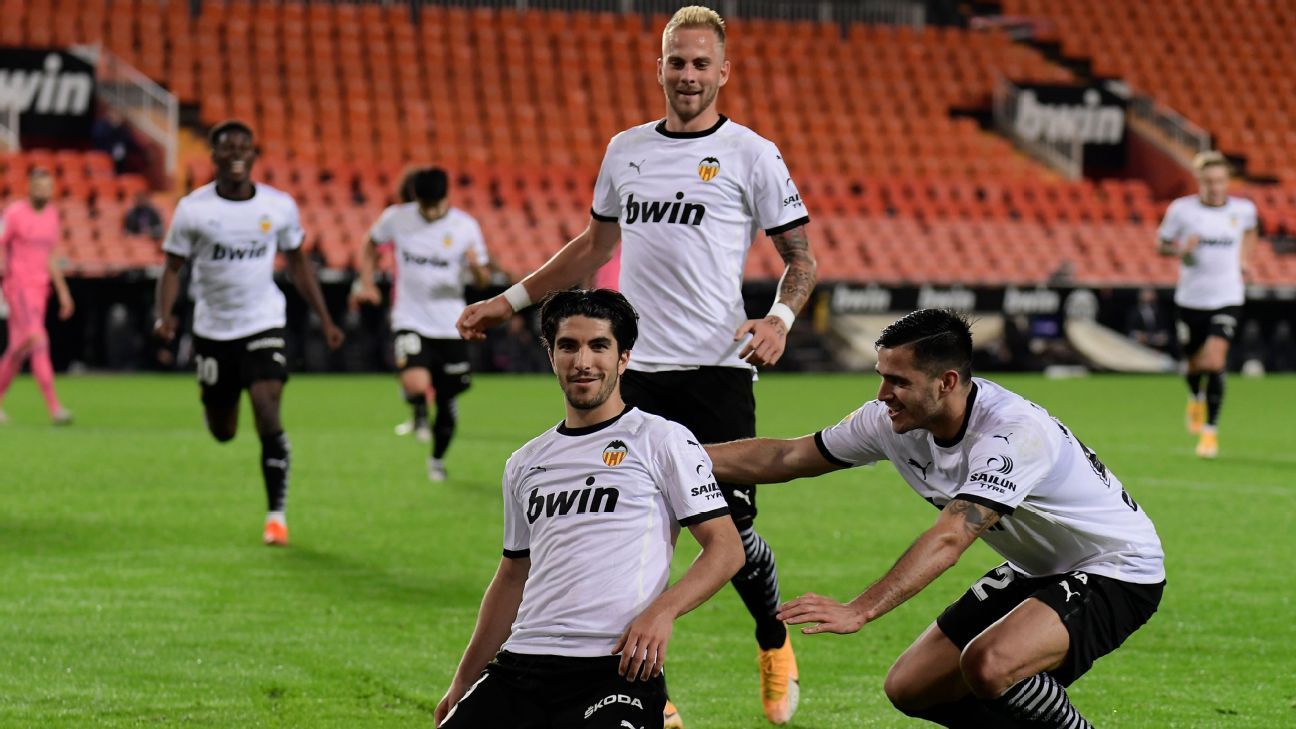 This is the story of how Valencia‘s historic 4-1 thrashing of Real Madrid on Sunday owes something to a grandmother, a grandad, Dani Parejo, Peter Lim, Getafe‘s Djene Dakonam, an angel, a demon and, of course, one of Los Che’s most famous ball boys.

This is the jam-packed, Keystone Kops, eye-of-the hurricane saga of how Carlos Soler came to miss, score and then score twice more, all from 11 metres out (36 feet) on the penalty spot, to hand Zinedine Zidane his worst defeat as Madrid manager. It’s a story so good that it prompted Valencia’s local football paper, Superdeporte, to title their Monday morning front page: “Ha, Ha, Ha, Ha!”

The whole intertwined process starts a week ago, when Valencia and Getafe furiously stoked their long-running feud with a foul fest of a 2-2 draw at Mestalla.

Bear with me, though. As much fun as that vendetta match was, it’s crucially important as to why Soler became Valencia’s favourite son for his heroics against the Spanish champions.

Picture the scene a week ago. Playing with 10 men since the 56th minute, in a match that produced eight yellow cards and two reds, Valencia have led their hated enemies Getafe until the 87th minute. Getafe’s Cucho Hernandez equalises, and then, entering the 95th minute with just 60 seconds of added time left, Getafe substitute Angel knees the ball home after it rebounds to him off Jaume Domenech‘s post. Cue Valencian desolation.

Not only is their agonising, month-long winless run about to continue, but also they’ve had a ton of salt rubbed in that wound because it’s the bruising, aggression-bristling Getafe side who waited until the dying seconds to turn defeat into “victory.”

From the ensuing kickoff, with just 45 seconds left, Daniel Wass launches a Hail Mary ball into Getafe’s penalty area. Right then, believe it or not, the calamities are about to begin for Real Madrid as well as for Pepe Bordalas’ side from the southern suburbs of Spain‘s capital.

Valencia’s Uruguayan striker, Maxi Gomez, is being pawed at by Getafe’s streetsmart right-back, Damien ‘Rules are for Suckers’ Suarez. So frantic is the chase for the ball that Getafe’s captain, Djene, trips on his teammate’s legs and crashes into Gomez to send him tumbling. Penalty. PENALTY! And straight from the kickoff!

Complete and utter mayhem erupts. Meanwhile, quietly, Soler goes and picks up the ball. He knows that when the tempest subsides, he is tasked with being the designated survivor.

The penalty is given on 95:27 minutes, but while Djene stomps about the penalty area, refusing to accept referee Jorge Figueroa’s decision, bobbing up and down as he howls into the night and rants at the “injustice,” time passes, and the horrible, unfair pressure on Soler mounts. Eventually, Djene relents to something like power-sharing with the ref, Suarez is sent off for persistent attempts to show the referee the error of his ways, and Jaime Mata is booked for refusing to let the penalty be taken. To make matters worse, Djene has taken the ball from Soler amid the melee and thrown it away.

By the time the Valencia-born 23-year-old — who was a Champions League ball boy for his club when they played Chelsea in 2011; then eight years later scored the opener on the Blues’ next visit to Mestalla — was able to take the penalty against Getafe, more than four minutes had passed.

Soler reflected on the madness to a group of journalists on Friday, two days before facing Madrid, confessing that those minutes had been purgatory for him. Just ahead of facing Getafe, one of Valencia’s assistant coaches, Chema Sanz, had told Soler: “Hey, kid, we’re going to get a penalty against this lot, and you’ll be taking it. And you’re gonna score!”

“I’d taken the occasional penalty in shootouts throughout my career but never one in La Liga because Dani Parejo was always our spot kick taker.

“When the referee blew for the penalty against Getafe, everyone started fighting about it, and it felt like I had the ball in my hands for six or seven minutes. Except for when Djene snatched it away from me and threw it toward the corner spot! And I began to talk things through in my mind as if I was talking to a friend.

“But, believe me, I had a demon on one shoulder and an angel on the other. “The demon was whispering to me: ‘F— it … what if you miss and there’s no time left to equalise and we’ll lose!’ But I turned to the little angel, and she said: ‘Look, if you practice penalties every single Friday and Saturday after training and you score the vast majority of them, then why wouldn’t you stick this one away, too?’

“That was the internal debate which was raging while everyone was arguing in front of me.”

When the moment comes, Soler trots up, in similar style to the famous technique of Valencia legend Gaizka Mendieta — imagine those prancing Lipizzan stallions of the Spanish Riding School in Vienna — and buries the 2-2 equaliser.

Cut to one week later: same ground, opposite goalmouth, similar stress, except he’s scoring the equaliser against Madrid, Spain’s champions. From the moment when Madrid “pinched” Predrag Mijatovic from Mestalla in the mid-1990s, there’s no question that this is the match, year in, year out, that Valencianistas most desperately want to win — not Levante, not Barcelona, not Atleti, but Real Madrid. No question.

The penalty is clear-cut this time: handball by Lucas Vazquez off Jose Gaya‘s cross. But Soler’s technique isn’t quite razor-sharp. Thibaut Courtois dives full-out to his right and parries the shot. Soler volleys the rebound off the far post, unable to react in time to guide it home, but young Yunus Musah is waiting to thrash it home off his left foot.

Joy, relief, reprieve. Match tied 1-1, despite Soler suffering the pain and embarrassment of missing only the second penalty he has ever taken in La Liga. Flooding through his mind were memories of his maternal grandparents, Rafa and Amalia, who would pick him and his brother up from primary school, drive them to their little village 5km north of Valencia and order the two kids to get their homework done. Then, one of Rafa or Amelia would go in goal (painted lines on the garden wall) so that five-year-old Carlos, in particular, could practice his shooting.

Rafa was the one who promised six-year-old Soler, shy as he was, that Grandad would gift him a Gameboy if he’d agree to sign up for the youth section of the local Bonrepos football club. There Carlos flourished until age seven, scoring a hat trick against the equivalent Valencia age group in the biggest win in Bonrepos’ history. It was the same year that Rafa Benitez won Los Che the Liga and UEFA Cup double before departing, in tears, for Liverpool.

All this and many, many nights when he and his young friends would take their free seats (as youth system pupils) at Mestalla and say to one another: “Imagine playing here and scoring and everyone chanting your name!”

Soler admits: “I thought to myself, ‘F—! I don’t think I can imagine that happening ever.‘”

But it’s Sunday night, La Liga’s closing fixture of Round Nine. Spain’s star-studded but depleted champions are 1-0 up, and he has just missed a penalty. What’s worse, referee Gil Manzano is jogging to the VAR monitor to see whether Yunus’ goal must be disallowed. There has been encroachment. And so, here we go again, Carlos.

The penalty was awarded at 28:22 minutes. But it isn’t until 32:55 that Manzano orders the retake, and it’s 34:12 when Soler runs up to have another go at beating the giant Belgian keeper Courtois, who seemed to be filling the goalmouth the first time, even before making the save. Six minutes later, with so much riding on this, it’s hard to even see the net on either side of his long, telescopic arms.

“While the VAR debate was taking place, there were doubts about whether I’d take it if the referee disallowed the goal. In fact, we got to a moment when Daniel Wass was going to hit the retake.

“My method is to try and hold off on striking the ball until I see the tiniest movement from the keeper — and Courtois guessed which way the first one was going. He’s great at holding off and waiting to the last instant before moving. Plus he’s huge — if you don’t put the ball right in the corner, he’ll get a hand on it. But I told myself that I practice these all the time, I score in training, and so I decided that if VAR disallowed the goal but ordered a retaken penalty, then I’d go again.

“When I was getting ready to run up the second time, of course, all the Madrid players were telling me that ‘Courtois has got you worked out!’ and ‘Put it down the middle this time’ and so on and so on.

“It comes with the territory. But last week against Getafe had shown me I could score under pressure, so I was confident — and when it went in, that gave me huge belief when it came to the next two penalties.”

It became the stat that was heard around the world: Never before, in more than a century of competition, had a referee awarded three penalties against Madrid. Soler — admittedly not without blood, sweat and tears — scored them all.

Thanks to Gran and Grandad and their painted goalmouth in the garden; thanks to Lim for insisting on culling the big salaries and selling Parejo to Villarreal; thanks to Djene and his lengthy histrionics the week before.

Thanks to a demon and angel battling it out on Soler’s shoulders in a universal representation of the “What if I fail/what if I succeed?” debate that always has — and always will — plague every single one of us. And thanks to the fact that Valencia-daft Soler, the ball boy who is now their leader, truly believed that practice makes perfect.

Well, the perfect story at least.