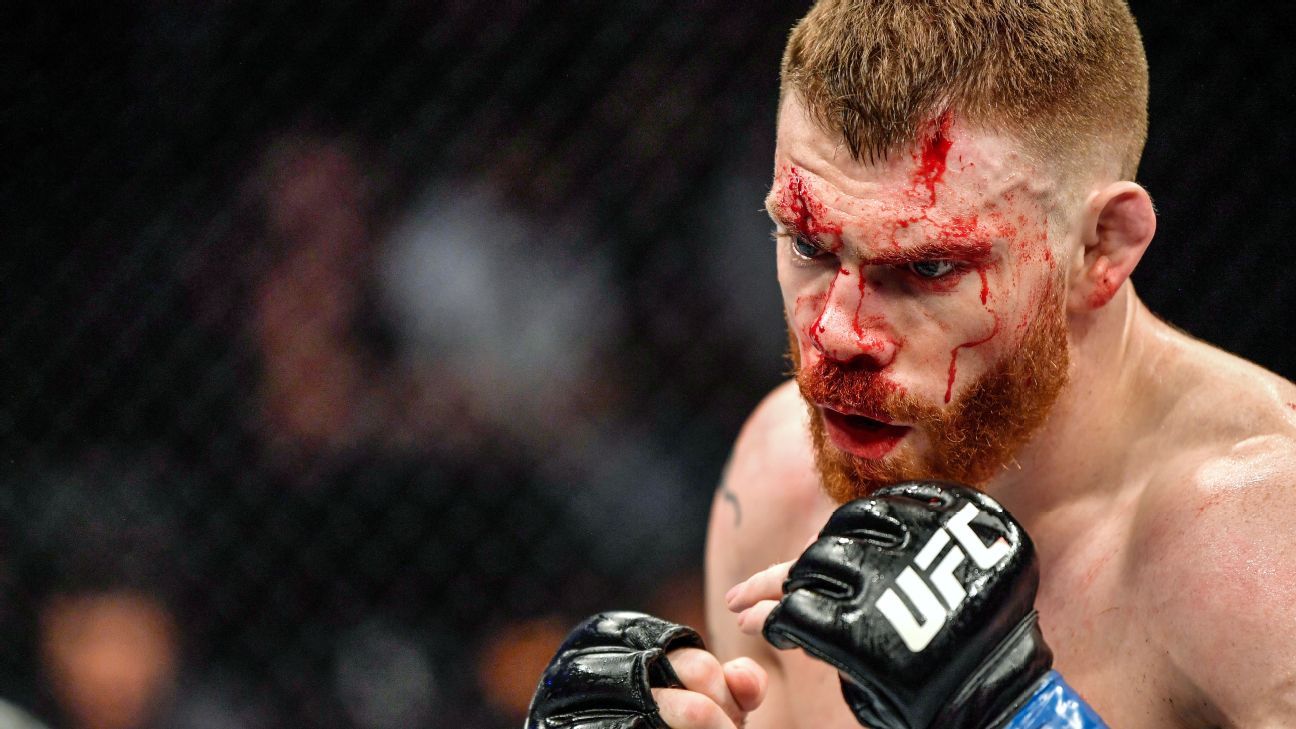 Editor’s note: This story was originally published ahead of Paul Felder’s bout against Dan Hooker on Feb. 22. Some content has been updated.

IT WAS LATE summer 2009, and Paul Felder was at a party with his theater friends. Felder had graduated from Philadelphia’s University of the Arts the previous year, and he was revealing his new passion in life.

It wasn’t what they were expecting.

“They were like, ‘Wow, that was insane. That was so cool that you did that,'” Felder recalled.

Felder had competed in — and won — his first amateur MMA fight a few weeks prior.

His friends likely viewed it as a novelty, something he wanted to try once while continuing his pursuit of an acting career.

A top-10 contender and a former champion will square off in Saturday’s UFC Fight Night main event. Paul Felder, who is ranked sixth in ESPN’s lightweight rankings, will face Rafael dos Anjos, the former UFC lightweight champ. Felder is taking the fight on less than one week’s notice after Islam Makhachev pulled out of the main event with an undisclosed injury on Sunday.

But they didn’t know.

“‘What the f— are you talking about?” was among the responses. “There’s gonna be plays. You’re gonna have auditions.”

If an actor’s dream is to have his name on a marquee, then Felder’s success story is complete. He headlined vs. Dan Hooker on Feb. 22, when he lost a brutal split decision in Auckland, New Zealand. And he’s returning to the main-event spotlight on Saturday when he faces Rafael dos Anjos. Felder is stepping in as a late replacement for the injured Islam Makhachev. Instead of being an analyst for the card, he will be a participant. Felder’s journey from the stage to the Octagon continues to be unique, and compelling.

“He’s got such a work ethic that he applies to his training, to his fighting, that he applied to his acting when I knew him,” said Pearce Bunting, who once co-starred with Felder on stage. “This guy could do anything.”

FELDER GREW UP in South Philadelphia, where he started training in martial arts at age 12, first in taekwondo and then in Shotokan karate.

But acting was his aspiration.

“Whenever he would do a play or whatever, he was always the most outstanding actor in the play,” said Ernest Losso, one of Felder’s acting professors at UArts. “He has a kind of charisma, which I guess he uses in the fight game also. That’s something you can’t teach. That’s something a person just has to have.”

Losso saw a “violent streak” in Felder during acting exercises, an intensity that actually made other students “a bit frightened.” The goal in acting exercises, Losso said, is to create conflict. And Felder was able to tap into something “primal and authentic.”

“I think that’s an element in him — the kind of rage that is in him — that you see in [Al] Pacino and [Robert] De Niro and those guys,” Losso said. “It’s a kind of element that I tried to nourish, rather than put aside. … He could really be a very nice, quiet, gentle guy. But he’s also got that other side that’s quite intimidating.”

Felder played the lead role, opposite Bunting, in Theatre Exile’s 2011 production of “The Lieutenant of Inishmore.”

“This character had a ton of rage in him, and he very artfully rode this line between showing that rage, acting out that rage, but also being really sweet and kind,” said Bunting, whose acting credits include a nine-episode run on “Boardwalk Empire.” “So it demanded a lot of him. And he was able to do it all.”

A review in StageMagazine said the lead role was “portrayed with fierce passion by Paul Felder, who delivers an outstanding performance pulling forth emotions ranging from crushing grief through maniacal rage.”

Bunting remembers Felder as an impressive, good-looking, young actor who had a bright future, someone who worked extremely hard and “attacked” everything he did.

“He wouldn’t have had any problem being in film and on television as, like, the bad guy,” Bunting said. “But the guys who play the bad guys always surprise you because they usually have hearts of gold.”

Felder said acting “seems like a distant memory” at the moment. “It’s almost like a dream to me sometimes, training and acting and being on stage in college.”

From the stage to the Octagon 🎭

It’s a dream he hasn’t completely abandoned. Felder, who is also an MMA analyst for ESPN, hopes to return to theater acting. He has talked with friends about investing in a stage production, and when he’s finished fighting, he’ll try to parlay his notoriety as a UFC fighter into bigger roles in movies or television.

“I think I’d surprise people when they see it,” Felder said. “Like, ‘Oh, s—, this guy that I thought was just this covered-in-blood murderer can be a little bit sophisticated.'”

THERE’S A HEADSHOT from Felder’s acting days that is a source of frequent ribbing from his MMA teammates at Roufusport MMA Academy in Milwaukee, Wisconsin.

“Could you imagine that kid is the savage he is now?” asked Jared Gordon, Felder’s friend and training partner.

Felder, a lightweight, is known for being one of the toughest men in the UFC’s best division, an action fighter who usually ends up wearing a bloody mask to match the color of his hair and beard. Last year, he suffered a collapsed lung during a fight — and won. A win Saturday would place him on a short list of title contenders.

The Roufusport stable has witnessed Felder’s ability to flip a switch and assume a different personality. UFC welterweight Belal Muhammad said Felder is one of the funniest, most down-to-earth guys in the gym — when he isn’t sparring. Felder rubbed some the wrong way his first few days in the gym four years ago, Muhammad said.

“Paul is like a whole different person training,” Muhammad said. “I already thought, ‘Man, this guy is gonna be a freakin’ jerk. He’s not gonna fit in at this gym.’ We’ve got a small group, and we all mesh together really well. … When we’re sparring, I see it in his eyes. It’s a fight right now.”

But at his core, even in the Octagon, are the qualities that he learned on stage.

“Being present and taking it in and enjoying the moment is something that I can say definitely carries over,” Felder said. “And preparation as well.

“Before you make the walk on the stage and things like that, there’s a lot of mental and emotional things you have to go through to get your mind right. I feel like that’s something I’ve been doing for a very, very long time, even before I was fighting. Getting my mind into a place where it needs to be, thinking about the things you need to think about. The task at hand. That kind of helped me a lot with just getting ready for a fight.”