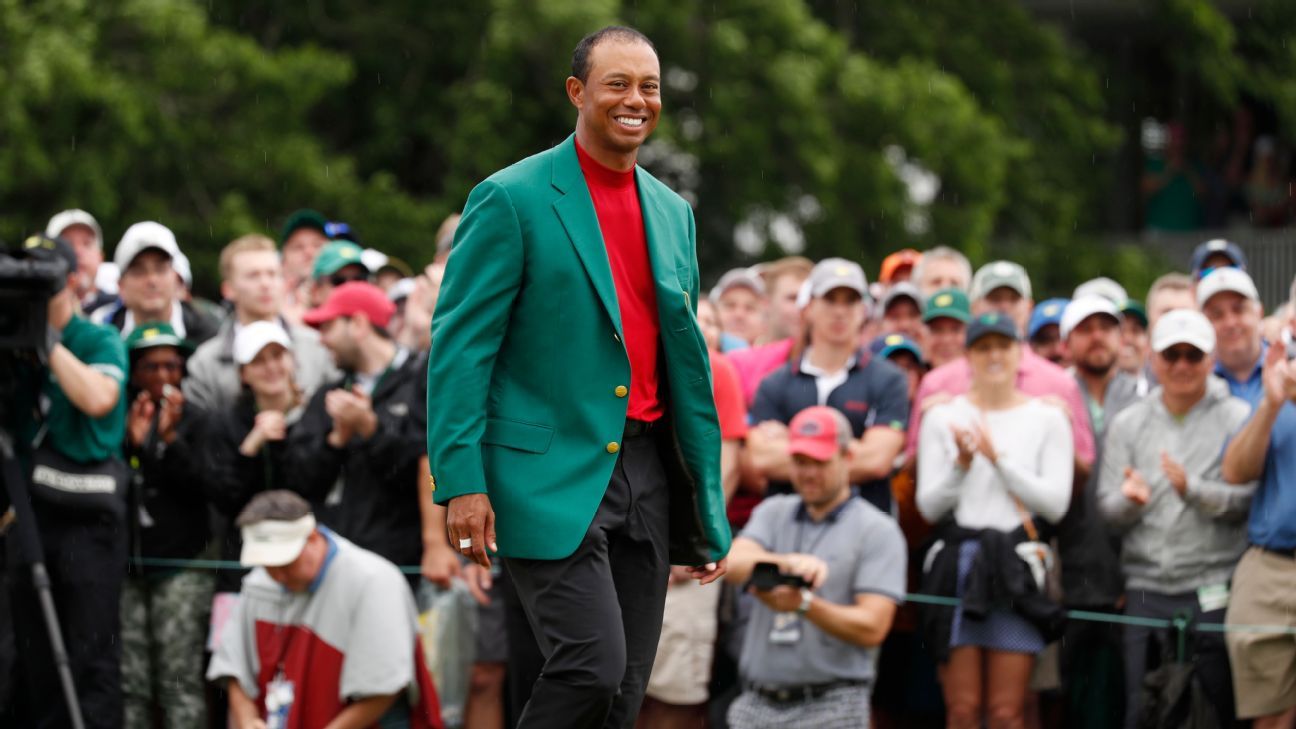 AUGUSTA, Ga. — Tiger Woods became emotional on Tuesday talking about his 2019 Masters victory, recounting the scene as he played the 18th hole at Augusta National, being moved by the spectators chanting his name, and then embraced his kids behind the green.

“I’m still just getting chills thinking about it,” he said. “Then I walked off the back of the green, to see [his son] Charlie there, just opened up to our arms, it meant a lot to me and still does. It just reminded me so much of me and my dad [Earl in 1997], and to come full circle like that, it still gives me … you know, a little teary.”

Such a scenario could not play out in the same manner at this year’s postponed Masters, which for the first time is being played in November because of the coronavirus pandemic.

The fact that Woods will begin his title defense teeing off on the 10th hole is just another reminder that this is a different kind of year. Thanks to less daylight, the Masters is ditching its usual first-tee start for all competitors for a two-tee, morning-and-afternoon scenario. He begins play at 7:55 a.m. Thursday, also far earlier than normal.

What kind of game Woods brings to the 84th Masters is a mystery, given his lackluster form for most of 2020. In six tournament starts since the resumption of play in June, Woods has not fared better than a tie for 37th and has not been in contention on the weekend.

“I haven’t put all the pieces together at the same time, whether it’s I’ve driven well or hit my irons poorly,” he said. “Or I’ve put the ball striking together, and I haven’t putted well. And then I’ve had it where I’ve putted well and I’ve hit it poorly. I haven’t played a lot, obviously.

“But it’s been gearing up for the major championships and trying to understand what we have to deal with, this year with COVID and trying to be safe, and I was hesitant to come back and start playing, and that’s why I waited as long as I did and came back at Memorial. From there, I really haven’t put all the pieces together, and hopefully that will be this week.”

Woods visited Augusta National on Oct. 31 and was back here on Sunday, following the same routine he did in his lead-up to a 1-shot victory 19 months ago over Dustin Johnson, Xander Schauffele and Brooks Koepka.

He played the front nine on Sunday, using only a putter and a wedge to work on his short game. He played the back nine Monday with Fred Couples, Justin Thomas and Bryson DeChambeau. Tuesday was a practice day, and Wednesday is expected to be a front-nine practice round.

One good sign concerns the way Woods wants to hit the ball and his health. Over the years, Woods has maintained that he works on hitting a draw — not his natural shot — for various tee shots on the course, such as the 10th and 13th holes. That came into focus at the right time last year, and from what he said Tuesday, the same is true now.

“I was working on a few of the things that I was working on last year coming into the event, being able to hit a high draw,” he said. “My body is feeling better than I did last year, so it was a little bit easier to hit those shots. Hopefully this year, I’ll be as consistent as I was last year. Last year, I was able to hit a lot of really good iron shots and I putted great. I had a great feel of the greens.

“Today, I did a little bit of work on the greens, just like I did last year. I took Tuesday off and didn’t play. Tried to get a feel for the greens, and the greens were a little bit slower than I had expected. With the rains coming up and the forecast, you just never know.

“That’s one of the neat things about trying to figure this tournament out is Wednesday to Thursday, this golf course changes a lot and what the committee does. Hopefully I get the same feel as I did last year and put it all together.”

One thing he won’t be able to replicate is the atmosphere. Due to the coronavirus restrictions, there will likely be fewer than 700 people on the course at any time. There are no ropes, no chairs, no grandstands.

And thus, no cheers.

“They helped me win,” Woods said of the fans. “The support that I had, the energy that was around the property, it was electric that day.