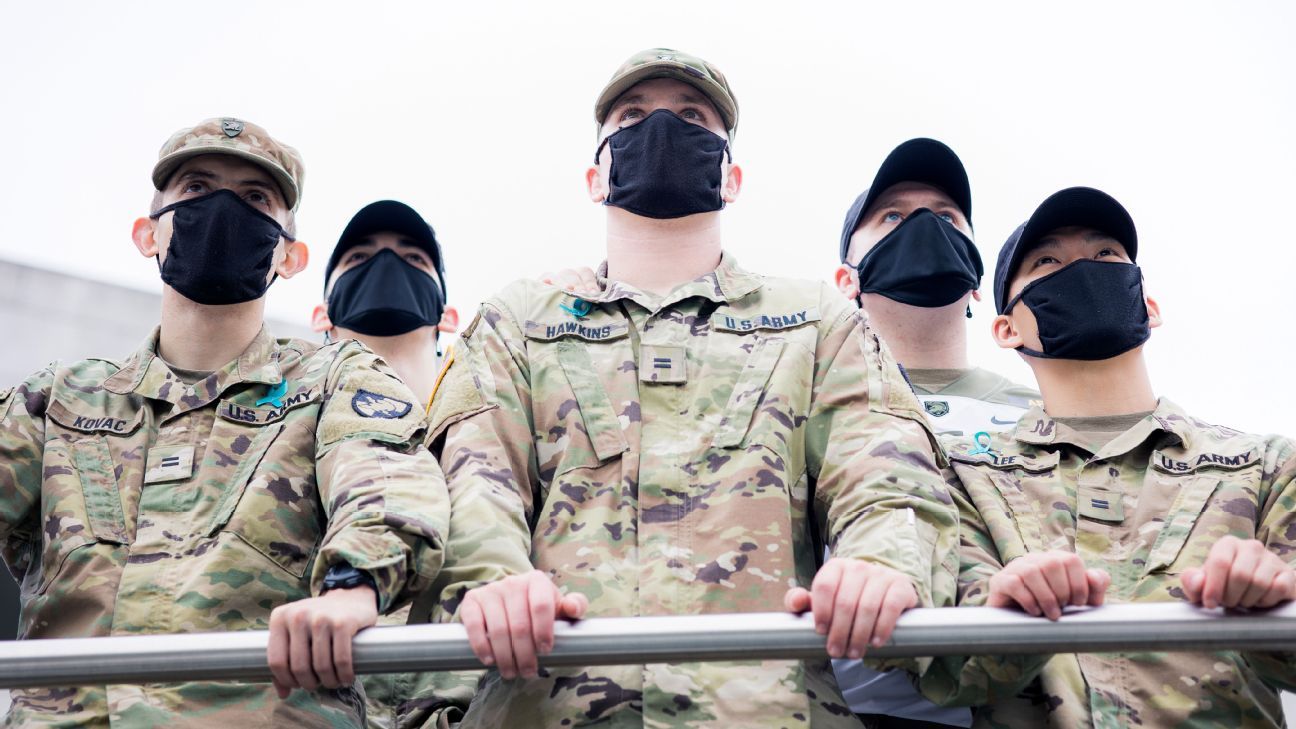 WEST POINT, N.Y. — Lt. Gen. Darryl A. Williams is uniquely suited to appreciate the interconnection between football and cadet life at the United States Military Academy. Williams, the West Point superintendent, played defensive end for the Black Knights in the early 1980s. He chased Heisman Trophy winner Doug Flutie of Boston College and sacked future Hall of Famer Dan Marino of Pittsburgh. He met two other Panther All-Americans, too.

“On the next play,” Williams said, “Jimbo Covert and Mark May came off a trap and knocked the s— out of me. I was carted off the field. Mark May was the Outland Trophy winner that year. Six[-foot]-seven, 330 [pounds]. They came around the corner and said, ‘OK, you get our quarterback? We’re going to get you.'”

In normal times, the overscheduled, “always on duty” life of the cadets cries out for the respite of a football Saturday, the pinprick that releases the tension brought on by the mix of intense military and academic curricula. An autumn Saturday on the West Point post — whatever you do, don’t call it a campus — becomes as much celebration as sporting event. Tailgating tents are erected on Trophy Point, the bluff 150 feet above the Hudson River. There’s no prettier venue in the sport.

A few steps away on game mornings, half of the 4,400 cadets, 18 regiments in all, stage a military parade across The Plain, the 40-acre green that serves as the historic center of the post. The parade is viewed not only by the Academy brass, but also by civilians who stuff the bleachers and spill out along the edge of the Plain. Williams also hosts a tailgate in a giant tent erected in the back yard of the 200-year-old Superintendent’s Quarters.

But these are not normal times. West Point quarantined 110 cadets last week, according to Military.com, after discovering their exposure to COVID-19 through contact tracing. So far, no cadets have tested positive. But the football team moved into a local hotel as a precaution. In a season unlike any other, no one is surprised. And it is a season unlike any other.

This season, on an Army football Saturday, there is no giant tent behind the Supe’s Quarters. There is no tailgate tent anywhere on the post. There are no fans to tailgate, none to watch the corps parade. The only fans who watch the Black Knights are their fellow cadets. During the COVID-19 pandemic, when cadets are not allowed to set foot off the base and civilians are not allowed to set foot on it, the role of football as safety valve is magnified.

“It’s a nice way of breaking up our time and having more of a relaxing environment,” said Cadet 1st Sgt. Kailey Conrad. “It’s always nice to see everybody’s faces.”

These days, from the nose up. There is a mask mandate in the corps. “It’s better than nothing,” Conrad said with a smile.

The 800 families who live on post can go in and out of its three gates. The cadets must stay. There are some bowling lanes, a golf course and plenty of hiking and running trails. There is also kayaking and fishing in Lusk Reservoir, just outside Michie Stadium. The Academy has occasionally allowed food trucks on campus. There was an Oktoberfest. But there are few ways to let off steam, besides football.

The only order of military business on a football Saturday is the parade. As soon as the marching cadets finish the spit-and-polish part of their day, they can put on their fatigues and chill. Without civilians to frame the vast Plain, the formations of cadets seem even farther away than normal. On the morning of the Mercer game on Oct. 24, of the 19 people occupying the 224 seats of the Superintendent’s Box, only four were not in uniform.

Yet the student announcers, standing below the box, are performing their duties, proclaiming over the public-address system to virtually no public the identity of each battalion, the companies within it, and the name, rank and hometowns of the top officers.

Even without an audience, “it’s still nerve-wracking,” said Cadet Capt. Kasea Losch, the lead announcer. She nodded at the Academy brass who review the cadets as they march. “You’re really talking to them. The generals don’t have special guests to worry about, so they want to talk to us. Gen. Williams loves to talk.”

If you had to draw up an officer to run West Point during a pandemic, you might pick Williams. He led the Army’s effort during the Ebola pandemic in Liberia in 2015. Before that, he directed an Army program that focused on spiritual and emotional resiliency. He takes the science seriously, and understands the toll the isolation is taking on the corps.

“Here at West Point, football is king,” Williams said. “There’s been a lot of references to football as combat. It’s not anywhere near combat. But some of the analogies in terms of the preparation, the violence, the coordination, the orchestration in terms of making a game plan, is similar to making plans for combat operations. So the analogies there work very well in our corps culture.”

Williams watches the games from the Army sideline, which is just as well. This season, the Superintendent’s Loge at Michie has no Washington VIPs, no one from the Pentagon. For the Mercer game, the only Loge patrons are a handful of employees from the department of public works, hanging out until they have to shut Michie down after the game.

West Point has continued as many of its football rituals as it could. The cannons on the opposite side of Lusk Reservoir still fire after every touchdown, once for each of the six points. They’re louder this season, because there’s no competing crowd noise. A team of five parachutists still drop from 4,000 feet to deliver the game ball, weather permitting. The jumpers are used to landing in an empty Michie; they do it for practice all the time. Jumping into a packed Michie is different.

“The best is when you get yelled at, and you look over at the sidelines, and you know what your coach is saying. It’s not just him opening his mouth.”

The corps awaits them this season. It’s just that there is no one else.

“The best is when you get yelled at,” said Cadet Lt. Jon Rhattigan, a senior linebacker, “and you look over at the sidelines and you know what your coach is saying. It’s not just him opening his mouth.”

Inside Michie during games, cadets wear fatigues and are excused from saluting superior officers. This season, to mitigate risk and maintain social distancing, the cadets are strategically placed among Michie’s 38,000 seats. The cadets sit by company, with each company assigned to a specific section. Cadet Capt. Jack Chronister pointed from the west side of the stands, where he sat in a straw cowboy hat and fatigues, to the east side, the corps’ normal home, which is vacant.

“We usually sit over there,” Chronister said. “It gets a lot more rowdy. We have crowd-surfing. We crowd-surfed the commandant. We usually have beach balls going. This is a little bit more weird.”

On the field in this atypical season, the Black Knights are doing what good soldiers do — adjusting to the conditions at hand. Army (6-1) accepted a bid to the Independence Bowl after its 49-3 defeat of Mercer, which was the team’s third FCS opponent in four weeks — a fact for which neither Army athletic director Mike Buddie nor head coach Jeff Monken will apologize. The difficulty of creating a 12-game schedule amid a pandemic would stump the shrewdest planner in the Pentagon. The BYU game has been canceled, and the Air Force game, scheduled for last Saturday, didn’t take place. The academies have not rescheduled it.

“You’ve got to get lucky,” Buddie said. “You’ve got to avoid the wrong person getting [COVID-19] at the wrong time, because we are all in positions sometime during the week where, if there was a positive among us, it would spread pretty quickly. … You can minimize those opportunities, but there are going to be opportunities.”

Monken is proud of his team’s play on the field, but he is equally so about how it has performed off of it. The Black Knights returned to post on June 1. Neither they nor anyone on the staff has had a positive COVID-19 test. Monken believes the forced togetherness has worked in his team’s favor.

“We went through so much, like everybody has — after the death of George Floyd, and just the tension in our country and, frankly, here,” Monken said. “We all feel it. It allowed us to bond, in a way, and grow as a team, where if they had all that freedom, we may not have accomplished as much.”

For all the sacrifices the corps has made this season, there are two prizes. One, because of the pandemic, the Navy game will be played at Michie for the first time since the wartime season of 1943. Two, the Black Knights are thriving in a makeshift season.

“2020 is the year of adaptability,” Buddie said. “I remember somebody wrote before the season, actually, back in June, ‘Hey, the most disciplined team is the team that is going to have the most success.'”

They know how to do discipline at West Point. They don’t need fans in the stands for that.