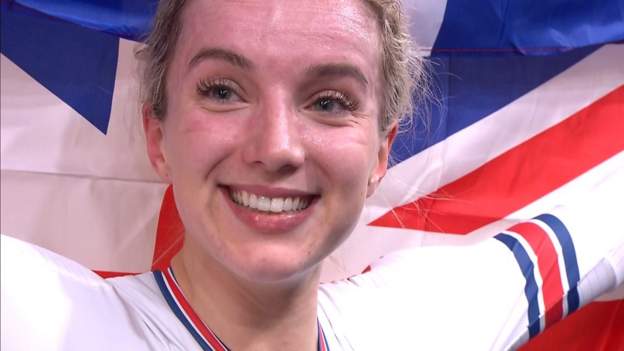 Elinor Barker hopes spectators will be able to attend the Olympic Games in Tokyo following news of a “milestone'” coronavirus vaccine.

The 2016 Olympic champion track cyclist says competing in front of crowds in 2021 would be the perfect scenario.

The 2020 Games were postponed until 23 July-8 August 2021 because of the worldwide coronavirus pandemic.

“Having spectators present is largely what the Olympics is about for us,” Barker, 26, told BBC Sport Wales.

“Being on the biggest stage in the world wouldn’t really feel the same if we were competing in empty stadiums.

“It would be really bizarre, so fingers crossed this vaccine is going to save the Olympics next year to some extent.”

The vaccine has been developed by pharmaceutical companies Pfizer and BioNTech and is one of 11 vaccines that are currently in the final stages of testing.

The companies now plan to apply for emergency approval to use the vaccine and a limited number of people may get the vaccine later this year.

In July, Tokyo 2020 chief executive Toshiro Muto said a vaccine was not a prerequisite for the Games, though health experts had cast doubt over whether the global sporting showcase could be held without a vaccine.

Mr Muto also said it was possible that the Games be held to a “limited” audience, but the organisers wanted to avoid the possibility of having no spectators at all.

Barker feels an Olympics held without spectators, though far from ideal for the athletes, would be better than missing out on the Games altogether.

“Given the year we’ve all had and the cancellation of the Games this year, I think every single athlete would take competing in an empty stadium compared with having to wait another year or completely skipping the Games,” she said.

The Welsh cyclist is back in action this week for the first time since being crowned world points race champion at the Track Cycling World Championships in Berlin in March.

She will compete for Great Britain in the madison and team-pursuit at the European Track Championships, which take place from 11-15 November in Plovdiv, Bulgaria.

Barker will partner Laura Kenny in the madison while she will compete alongside Kenny, Katie Archibald and Neah Evans in the team pursuit.

The British team won team pursuit gold at London 2012 and Rio 2016 and will be favourites again for victory at Tokyo next year.

“Because we don’t really know what’s going to happen between now and Tokyo we’re almost treating this as if it’s the only race we might have because it might well be,” said Barker.

“We’re really hoping that it’s not, but it could be so we’re going to go out and give it our all but also try to learn as much as we possibly can from the experience because it might be the only race we get.”

Barker will race in the team pursuit on Wednesday and Thursday before turning her attention to the madison with Kenny on Sunday.

“I’m particularly excited for the madison because while we haven’t been able to race we have managed to change our training a little bit to replicate racing as much as we possibly can,” said Barker.

“We’ve had some really fun sessions in the last few weeks so I’m really looking forward to Sunday.”