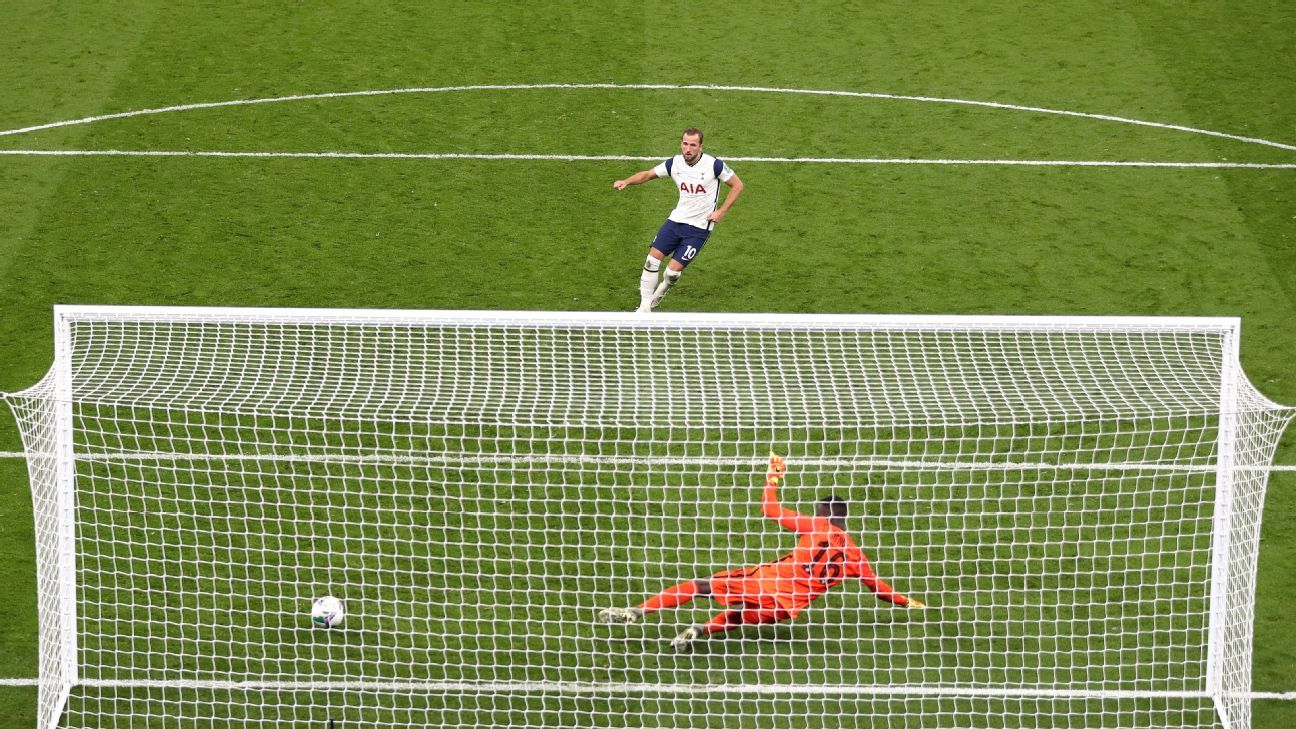 Penalty taking has never been more important than it is in 2020. The introduction of VAR across Europe’s top leagues, combined with revisions to the handball law, have contributed to a dramatic increase in the number of spot kicks awarded throughout the game.

There have been 41 penalties in 78 Premier League matches this season. By comparison, there were only 92 awarded in all 380 games of the 2019-20 campaign. If referees continue to make decisions at the same rate, it projects to a staggering 195 penalties in 2020-21, and nowhere has the impact of more penalties been clear than in the interpretation of a handball.

Figures show that the rewriting of the handball law in 2019 have played a key role, not to mention the way VAR adjudicates each decision. Serie A and La Liga implemented the new law immediately, but the Premier League allowed referees to continue with a more relaxed approach until this season.

A revised interpretation of the handball law was first used at the 2018 World Cup in Russia, which was then used by most of the major leagues in 2018-19 when there were 37 penalties awarded for handball in Serie A and 35 in La Liga. In England, sticking with a more traditional interpretation, there were just 14.

But penalties rocketed after the handball was officially revised in the Laws of the Game ahead of the 2019-20 season, making the rule much stricter. There were 57 in Italy and 48 in Spain, but just 20 in the Premier League — again, due to a more traditional interpretation.

However, FIFA has called for greater uniformity and Premier League referees are now told they must award fouls for handballs, regardless of intent, whenever a player has made their body “unnaturally bigger.” A classic example of this came on Nov. 8 when Joe Gomez was adjudged to have handled Kevin De Bruyne‘s cross as Liverpool drew 1-1 at Manchester City.

“It’s frustrating and I know they’ve made an adaptation to the rule, but at some point you have to look at the game in real time,” Gomez after the match. “Anyone in slow motion can say, ‘Yeah, it’s hit his hands,’ but judge a scenario for what it is and that’s not being done at the minute.”

The referees agree too. This is why the IFAB (International Football Association Board) will discuss a proposal from UEFA — supported by the Premier League — to return to a more liberal interpretation of the handball rule when the technical committee meets on Nov. 23 to discuss changes to the Laws for 2021-22. UEFA is concerned as the Champions League reflects the trend too: in the past two seasons, there were 12 penalties awarded for handball (out of 111 total) but there have already been 11 in the first three matchdays of 2020-21 (36 penalties in total).

The end result is that taking penalties has become a key skill that increasingly determines a team’s success. So, how are teams trying to sharpen their spot-kick skills, who are the best players from 12 yards and how are they so effective?

There is only one man to start with when discussing the art of taking penalties in English football: Gareth Southgate. The former centre-back missed the decisive spot kick in England’s Euro ’96 semifinal defeat to Germany, cementing the cornerstone of a historic barrier he has subsequently tried to break down as manager.

Under Southgate’s guidance, England won their first penalty shootout at a World Cup by beating Colombia in the round of 16 stage two years ago. It was the culmination of an exhaustive body of work that included practicing penalties at the end of training sessions to replicate the fatigue of extra time, detailed instructions on the walk-up to the penalty spot, overall mental preparation, a more intensive study of opposing goalkeepers and perfecting multiple penalties under pressure rather than relying on just one preferred kick.

But how does that work evolve over time? After all, the numbers show that the most popular takers are now deployed more often for club and country, leaving a real danger of becoming predictable in their approach.

“They’ve got a very clear picture in their mind and where we’ve tried to affect people’s thinking is with those that don’t take as regularly, because I think if you start to mess with technique that doesn’t need fixing, then you can probably only make that worse.

“[For] our regular takers, we facilitate the practice and are there to make some observations, but really, we have got some players with very, very good records for their clubs — [Marcus] Rashford and [Harry] Kane in particular — and they just continue to practice with another group who are also looking to take penalties with their clubs, or take them less regularly for their clubs. We’re fortunate to have some very good executors of that skill, really.”

Southgate adopted a forensic approach to puncture a collective psychological fog that left a generation of England players framing penalties as a lottery rather than an executable skill, and Kane perhaps embodies this better than most. The 27-year-old has scored 22 of his past 23 penalties in all competitions and has been known to practice up to 50 spot kicks in a single session. His unerring accuracy from 12 yards was a key factor in England reaching the 2018 World Cup semifinals.

Frank Lampard was part of the generation after Southgate that battled inner demons from the penalty spot, playing in two tournaments that ended with shootout failures, scoring himself in the Euro 2004 quarterfinal defeat vs. Portugal, only to miss in the 2006 World Cup quarterfinal exit, also against Portugal. Yet Lampard was remarkably consistent at club level, netting 43 out of 50 attempts in the Premier League. Only Alan Shearer (55) has scored more in the competition’s history.

“You’re actually not going to get the best answer from me because I’m quite superstitious about penalties: I was as a taker,” Lampard told ESPN. “Maybe that was part of my process of taking them. I probably did adapt my style over the course of my career depending on form, if I missed any, my position, which at times I focused on a lot and then came away from that.

“Because I was like that as a player, I tend not to go too much into the head of the penalty-takers in our team. I trust them, their style and the way they take them. That’s why they are in those positions. I let them get on with it — I won’t discuss anything more in terms of going forward.”

Players must rely to an extent on instinct and out-thinking previous patterns because of the exhaustive video analysis work done by top clubs. And with more penalties being awarded, there is more evidence available.

Watford goalkeeper Ben Foster saved a penalty against Blackburn in the Championship on Oct. 21, and he explained to ESPN how he managed to predict where Adam Armstrong was going to shoot.

“As a goalkeeper, you’re not expected to save a penalty but there’s loads of little tricks and stuff you can do to try and just gain that little bit of advantage,” he told ESPN. “We always watch the penalties from the player that normally takes the penalty — we’ll watch his previous kind of nine or 10 penalties wherever it is.

“I try and just pick up a few tells or a few clues. The Blackburn one was a prime example. On the videos he put six to the right and two to the left. And the two that he put to the left, he did this little like jig, this little shuffle, and then moved into the penalty. As soon as I saw him do that, I thought ‘you’re going to my left here,’ even though he preferred the right, and thankfully it was a lovely height for me to save it.”

Those players that thrive in this highly scrutinised, technologically advanced era are finding the right balance of routine and unpredictability to stay one step ahead of the rest.

The Lazio striker has missed only twice since 2017 and maintained the second-highest conversion rate despite taking the highest number of anyone in Europe’s top five leagues.

Ronaldo inevitably took on penalty duties at Juventus after leaving Real Madrid in 2018, missing one in his final year in Spain before two failures for the Bianconeri against Verona and Sampdoria.

Has missed only twice since joining Palace from Olympiakos in 2017. The Serbian midfielder boasts a higher conversion rate than Ronaldo, but sits below him having taken four fewer spot kicks.

The centre-back has the highest conversion rate of any player to have taken more than 11 penalties and netted a high-pressure spot kick in his 45th Clasico last month.

Like Ramos, the Brazilian would be higher if there were a bigger sample size, but PSG have been awarded only 13 league penalties since 2017. The one his missed in Ligue 1 was the last one he took, against Saint-Etienne in December 2019.

The Polish goal machine has the best conversion rate of any player to have taken more than 20 penalties, but the relatively small number Bayern Munich have earned denied him top spot.

The 31-year-old has yet to take a penalty this season, with Santi Cazorla first choice at Villarreal, and the veteran midfield missed his last one in La Liga for his former club Valencia. That said, Parejo’s consistency gets him on the list.

A veteran now, aged 37, but still prolific from 12 yards. However, five misses, three of which came last season — against Atalanta, Brescia and Parma — damaged his conversion rate.

The former England striker scored one and missed another in the same game against Wolves last weekend but is usually reliable from 12 yards.

It would be churlish to describe any part of Messi’s game as a weakness, but penalty taking has never been his strongest suit.

Kane would be much higher on this list were penalties in European competition and internationals included. Doesn’t just score, but usually rifles the ball past helpless goalkeepers.