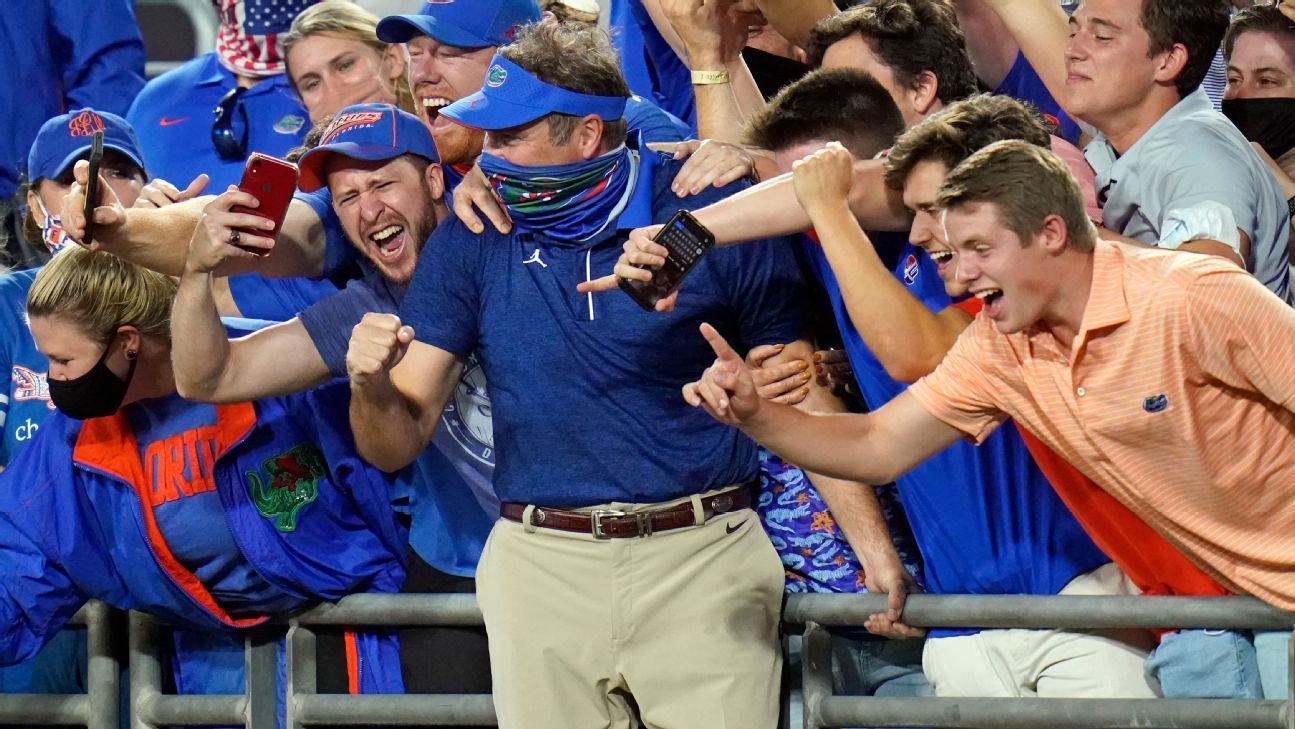 Dan Mullen ran into Steve Spurrier on Monday inside the Florida football offices, and for the second time this season, the former Gators coach gave something to the current Gators coach: a bottle of wine to celebrate another milestone.

The first time, Spurrier gave Mullen a gift after the Gators’ offense set a school record for total yards against an SEC opponent — breaking a mark Spurrier’s 2011 team set. This time, it was to celebrate Mullen’s first win against Georgia — a 44-28 victory that put Florida in control of the SEC East and kept its College Football Playoff hopes alive.

The connection between the two coaches is a meaningful one, a present day acknowledgement of the past. Anyone who understands Gator football understands “the Spurrier way” is the way everyone in Gainesville expects to win: Put an exciting offense together, then make sure you score.

That is exactly what the No. 6 Gators are doing, averaging nearly 500 yards and 42 points a game. While this seems to be the overriding philosophy across college football, Spurrier revolutionized this notion at Florida with his Fun ‘n’ Gun offenses in the 1990s, blitzing the SEC with a passing-first mentality that left opponents playing in slow motion.

Florida raked in the yards, points and victories — and a few championships, of course — under Spurrier, setting a difficult standard to meet for nearly every succeeding coach following the 2001 season, when Spurrier stepped down.

Urban Meyer is the only one who did, and Mullen was on his staff, completely understanding what Gator fans expect — that Florida should always have a game-changer at quarterback, prolific offenses and points beyond comprehension. But this idea firmly took root under Spurrier.

“Coach Spurrier, he set the bar — fun is not just winning, but also scoring a lot of points for the fan base,” Mullen said Monday. “So we’re trying to make sure that it’s not just fun for us, it’s fun for the whole Gator Nation, so I guess that way we’re living up to it.”

Indeed, the way Florida is playing behind quarterback Kyle Trask does not necessarily harken back to the Tim Tebow days, when Mullen served as offensive coordinator. Rather, it is reminiscent of the way Florida played under Spurrier — a pass-heavy offense reliant on a pro-style passer.

The offensive schemes might be different, but they have this in common: a belief that every throw can go for a touchdown, and a swagger from the visor-wearing head coach that their offense always has the upper hand.

Though Spurrier never coached a quarterback as big as Trask, who is 6-foot-5 and 240 pounds, he had quarterbacks who studied the game as Trask does: keenly understanding what defenses will give him, combined with the wherewithal to place the ball in the spaces only his receivers can get it.

Trask even wears No. 11 — the first quarterback to do so since Spurrier in the 1960s — adding to the connection even more.

“Kyle Trask has turned into the Joe Burrow of 2020,” Spurrier said when reached by phone earlier this week. “I mean he’s throwing touchdown passes and completions. He’s turned into a beautiful passer.”

Trask has worked his way into the Heisman Trophy conversation with 1,815 yards passing, 22 touchdowns and three interceptions in five games this season. He is the first SEC quarterback with at least four touchdown passes in five straight games, a feat Florida Heisman winners Danny Wuerffel and Tebow never accomplished.

Watching Trask work in the pocket since taking over as the starter last season has put the bulk of the past 10 years in the rearview. Before Mullen arrived, Florida consistently had one of the worst offenses in the country and missed at quarterback in every recruiting cycle, hard for anybody associated with the program to accept because of its proud history and tradition.

While joining SEC This Morning, Florida head coach Dan Mullen explains what it will take for the Gators to become a championship team.

After Spurrier stepped down as South Carolina’s head coach in 2015, he returned to Florida as an ambassador and consultant, and he made himself right at home with an office inside the athletics department. He often popped in to see former coach Jim McElwain, making suggestions for plays that were not always greeted with open arms. If there was any resentment then over a beloved former head coach and alum trying to exert some influence over the program, there is no resentment now.

Rather, there is an appreciation for what Spurrier and his teams brought to the Gator faithful, from the coaches offices all the way to the fans. And even Spurrier says what he is watching now reminds him of what his teams did 25 years ago.

“Fans love to see touchdowns, love to see the ball in the air, but scoring points is what you must do to win a lot of games,” Spurrier said. “You’re not going to win many 17-13, so it is a reminder a little bit of the teams we had in the ’90s that could score. In Danny Wuerffel’s day, we scored 50 or more in every game in ’96, so that’s probably one reason the fans did enjoy coming to the Swamp.”

Leave it to Spurrier to point out what this Florida offense has not achieved, but there is plenty else to point out. Comparing both coaches through their first three seasons running the program, Mullen’s teams are averaging slightly more points per game (35.5 for Mullen, 30.3 for Spurrier). Some of that might have to do with the shift across the sport toward offense the past 10 years, taking the power away from the “defense wins championships” mantra.

There is more; Mullen’s teams have already posted 10 games with 500-plus total yards, six against SEC teams. In the 101 games spanning the 2010-17 seasons, Florida had nine 500-yard games, only five against SEC teams.

“When Coach Spurrier arrived in 1990, teams like Georgia and Auburn were traditional, run-first teams, and they were having to go to four- and five-receiver sets throwing the ball all over. So a great offense not only affects the opposing defense, it forces the opposing offenses to have to hold serve and score every time they have the ball — much like what LSU did last year.”

Florida set the tone for its offense in Week 1 against Ole Miss, with a school-record 624 yards of total offense. This past Saturday against Georgia, Florida had 571 total yards — the most allowed by a Georgia defense since 2001, when the Gators had 584 yards in Spurrier’s final season as head coach. Mullen badly needed the win, not only because he was 0-2 against the Bulldogs as head coach, but because a loss would have all but eliminated Florida from championship contention.

After the final seconds ticked off, Mullen celebrated on the field with his players and then jumped into the stands to celebrate with the remaining fans. Videos players posted from inside the locker room showed Mullen dancing in a long-anticipated celebration. Spurrier watched the game from inside the press box, proclaiming it “a good day for all Gators, as well as Coach Mullen.”

There is still work to do, though, especially if this team wants to accomplish the most important thing all those Spurrier teams did: bring home championships.

“We’ve put ourselves in a good position at the halfway point of the season,” Mullen said. “We still control our own destiny of what we can do and what we want to accomplish this year, but any great team is going to get better from one week to the next. Great teams don’t peak at the midpoint of the season. Great teams peak in early, mid-December, and then early, mid-January. That’s got to be our goal and our focus this week. If we don’t improve, last week was really irrelevant.”