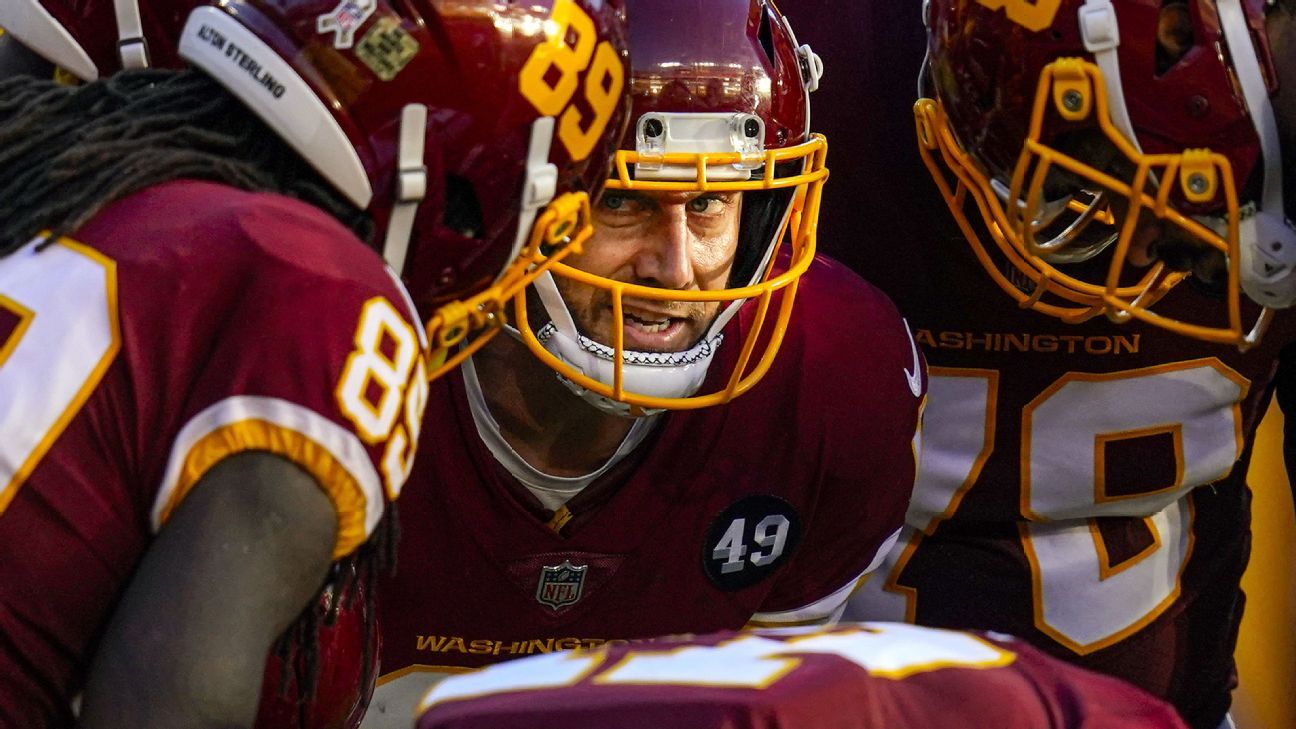 ASHBURN, Va. — During a videoconference with military veterans at Walter Reed Medical Center on Tuesday, Washington Football Team quarterback Alex Smith revealed the mindset during his recovery that also has shaped his pro career.

“Try to be as positive as possible,” he told the assembled viewers. “We all have our dark days. … It’s tough. Everybody knows some days are great and some days are really, really tough and frustrating.”

That also describes his career in the NFL. Since entering the league in 2005 as the No. 1 overall pick by the San Francisco 49ers, Smith has been cast aside, counted out and survived. He has been labeled a bust, made the Pro Bowl, been traded twice, injured several times and viewed as an inspiration.

Now he’ll make his first start Sunday at the Detroit Lions (1 p.m. ET, Fox) since the worst day of his career: Nov. 18, 2018 when he broke the fibula and tibia in his right leg.

It’s the toughest thing he has had to overcome — by far — but not the only obstacle.

While some players have a linear path to success, Smith’s has looked more like a river on a road map — meandering here and there but always flowing forward.

Here’s how all of that has unfolded in his career:

Smith struggled for most of his first three seasons with the 49ers, with flashes of promise his second year — his one season under offensive coordinator Norv Turner. As a rookie, Smith did not win the starting job out of training camp but took over in Week 5. A week later he suffered a knee injury against Washington. By the season’s end, he played in nine games but threw one touchdown to 11 interceptions.

After a better sophomore season — 16 touchdowns, 16 interceptions — injuries and poor play were again the story. His first three seasons looked like this statistically: 30 starts, 19 touchdowns, 31 interceptions. His total QBR of 35.4 was the worst among quarterbacks with at least 30 games played between 2005 and 2007.

It was not a good start. Smith was on his way toward wearing the bust label.

Smith’s fortunes did not improve in 2008, when he injured his surgically repaired shoulder and missed the season. Then, in 2009, journeyman Shaun Hill beat him for the starting job. But Smith reemerged and started the final 10 games, playing the best ball of his young career — 18 touchdowns, 12 interceptions. Once again, he became the quarterback of the 49ers’ future — and he was only 25 years old.

In 2012, following the best 25-game stretch of his career — 30 touchdowns, 10 interceptions — Smith suffered a concussion. And that all but ended his days as a starter in San Francisco. Colin Kaepernick, a second-round pick in 2011, emerged in Smith’s absence, and coach Jim Harbaugh stuck with Kaepernick after Smith had recovered.

As Kaepernick led the 49ers to Super Bowl XLVII — a loss against Baltimore — Smith could only wonder what would have happened had he continued starting. He helped Kaepernick behind the scenes, but the end was coming for Smith in San Francisco.

San Francisco traded Smith to the Kansas City Chiefs during the 2013 offseason, receiving two second-round picks. The move certainly paid off for Smith and the Chiefs. He was the NFL’s 13th-rated quarterback in Total QBR during this stretch (among quarterbacks with 50 or more starts), and he threw a combined 103 touchdowns to 33 interceptions.

But the Chiefs traded up to select Patrick Mahomes in the 2017 draft. Behind the scenes Smith tutored Mahomes, and Smith was in the MVP discussion in 2017 when he had career highs in passing yards (4,042) and TDs (26) with five interceptions. There was all sorts of talent on that offense, and Smith had elevated his game under coach Andy Reid. However, it was clear to all Smith’s days were numbered in Kansas City.

With Washington wanting to move on from pending free agent Kirk Cousins, the franchise traded a third-round pick and cornerback Kendall Fuller to the Chiefs for Smith in 2018. It wasn’t a smooth transition for Smith; there was frustration on his end, along with the coaches, because of the pace of progress in this offense and what he was being asked to do.

But he excelled at taking care of the ball, and that, in part, helped Washington to a 6-3 record entering a Week 11 game against the Houston Texans. Washington was not a powerhouse, but it was playing better and leading the NFC East by two games.

For all the ups and downs of Smith’s career, nothing came close to what happened on Nov. 18, 2018.

On a sack by Houston’s J.J. Watt, Smith suffered the devastating injury. This is what followed: 17 surgeries to remove an infection, near amputation and a two-year battle to return to the starting lineup. At times he could barely walk; he needed an external fixator on his injured leg for eight months. Playing again did not seem like a realistic option for most of his recovery — until he started to make bigger strides in the spring.

Even this summer, members of the organization, while cheering him on, did not factor him into the team’s plans. But he was cleared to return before training camp began. Then Smith convinced the team to not put him on injured reserve before the final cuts and keep him on the roster.

His recovery was met with admiration and doubt each step of the way. It led to an inspirational story. And after opening the season as the No. 3 quarterback, he tasted his first game action since his injury in a Week 5 loss against the Los Angeles Rams.

“It’s about embracing what life brings at you,” Smith told the veterans Tuesday. “The good, the bad and the in-between.”